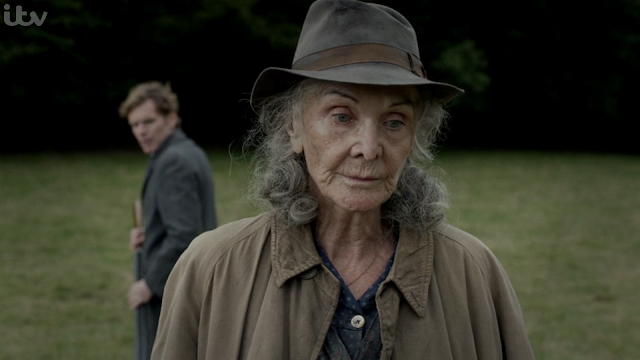 My review of the previous episode: Lazaretto.

In 1962, botanist Matthew Laxman went missing. In the first minutes of Harvest an atmospheric black-and-white flashback shows us his final moments, as he picked up a man on the side of the road, swerved to avoid a lorry and...black screen.

Back to the present. Relatively speaking.

It's 1967, and Courtney College archaeologists have just discovered a 2000-year-old body in Bramford Mere, close to where Laxman disappeared. Morse has a theory about the old body's cause of death, but the more pressing matter is that a pair of glasses were discovered close by that could have been Laxman's. Thursday was dissatisfied with the investigation last time around ("County," he grumbles, but he also suspects his previous bagman D.S. Lott wasn't "as thorough as he could have been") so he drags Morse along and they start to interview relatives. 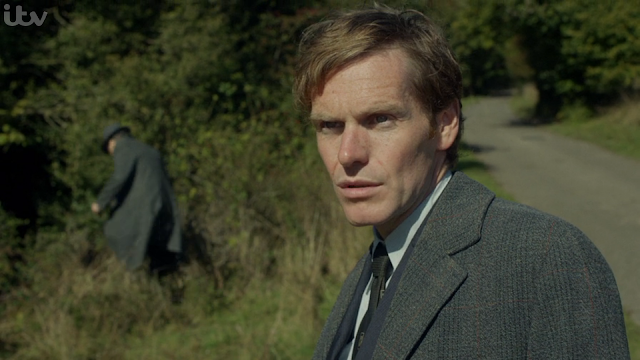 First of all, there's Mrs. Alison Laxman, who doesn't have much help to offer. She directs them to Laxman's close colleague, Professor Donald Bagley. Bagley used to be a staunch supporter of nuclear power, but when his wife died from leukemia he revoked his support.

That's an interesting coincidence, because there's a huge nuclear power station near Bramford. When Morse and Thursday arrive in the village, they discover that the previous investigation didn't even attempt to interview power station employees. Morse tries to chase down the appropriate bureaucratic permission to get inside, but he's stonewalled. Enter the ever-entertaining Dorothea, who enlists Morse as her photographer "Snappy Jenkins" ("Snappy?" "Well, you can be.") He does a bit of investigating while she interviews the power station chief, Elliot Blake. Blake's American colleague, Dr. Jon Levin, is living in the village.

Morse ran into Mrs. Levin while he was interviewing a handful of villagers who feel like they've been pulled directly from the cornier portions of Hot Fuzz. I don't know much about Britain in the 60's, but a whole village of people whose belief system dates to around 1600 seems like a bit of a stretch. There's a shopkeeper who tells Morse "goddess bless thee." A surly man - Zebulon Sadler - tells Morse and Thursday a grim story about a witch burning. Morris men dance in the center of town. People slam doors and sharpen knives...creepily (it's a small town, you see - small towns are creepy - haven't you seen Midsomer Murders?) 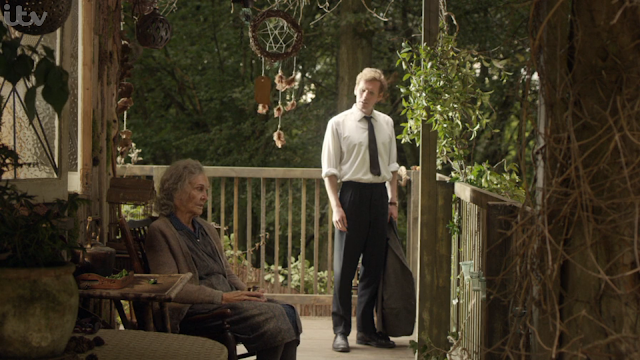 The chief pagan is our very own tarot reader, Dowsable Chattox. "Morse. I've been expecting you," she says, waving her gun at him. She lives in a ramshackle mystical hut in the woods and isn't quite as important as the menacing tarot predictions scattered through the season seemed to imply. While she's an interesting, quirky character, the most important thing about Dowsable is that she's played by Sheila Hancock, John Thaw's wife and Abigail Thaw's step-mother. Hancock seems to have fun playing the absent-minded old biddy, whispering dire predictions and offering to read Morse's fortune, but as tribute characters go, she's no Dorothea.

Of course, there is one sane person in the village, Dr. Tristan Berger, who lives with his sister, Selina. Who would guess that Dr. Berger is, in fact, the head of the village...coven? Cult? Society for the Preservation of Historical Religious Customs? Selina tells Morse that she saw Laxman's car five years ago, right after seeing The Loneliness of the Long Distance Runner (a young John Thaw's first film).

Morse, meanwhile, has discovered Laxman's clothes on a scarecrow and his car in the barn of Morag Morrison. While Morrison owns up to stealing the car, he denies any involvement with the clothes. Other characters have confessions to make as well. Dowsable Chattox lied about never seeing Laxman, and he was having an affair with Selina Burgess. 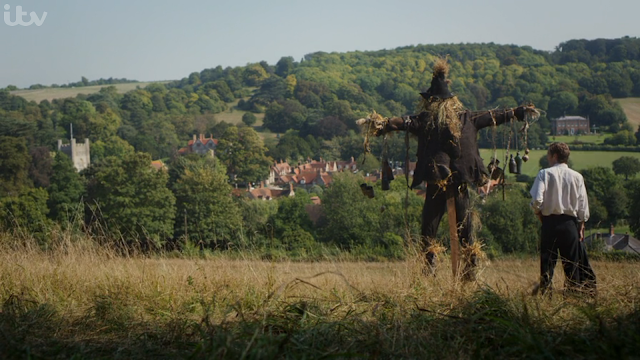 Back in the city, D.C.S. Bright has returned to duty. The Cowley station gang go down the pub to have trivia night (Morse looks like he's suffering), and Strange gives Morse a tip about a possible job opportunity in London. It sounds like a good idea - even more so when Morse's flat is burgled by persons unknown. Some of his possessions end up back at the nick, and Thursday finds Morse's picture of Joan. Her address is written on the back, so he tracks her down. While she's surprised at first, she's as defiant as ever, refusing to return to her "9-to-5" life. She says that the married man who furnishes her flat  - Ray Morton - will leave his wife. She seems to believe it. Fred certainly doesn't. While he leaves Joan in peace, he catches up with Ray in the parking garage and puts the fear of God into him, Fred Thursday style.

When Thursday finally confronts Morse about Joan, the older man is surprisingly understanding. But then, I think he's come to realize Joan doesn't want to be saved. Or does she? She turns up at Morse's flat with a black eye and an empty purse. Morse finally makes his move, going from zero to 60 and proposing on the spot. She interprets the proposal as pity, and Morse doesn't correct her - partly, perhaps, because she's right. He has grand, largely abstract romantic feelings for her, but not ones he necessarily wants to make concrete. Her implication that her father wouldn't approve reminds him of his work failures and changes the subject permanently. Joan heads back into the night with a handful of Morse's money. By the end of the episode, Ray's abuse has resulted in the fulfillment of Dowsable's prophecy: Joan miscarries the baby she was carrying. 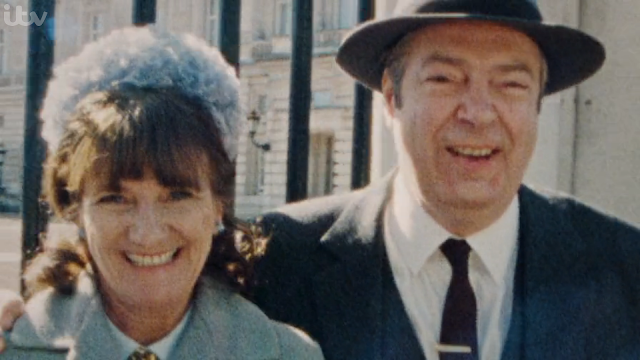 There are a ton of loose ends in this episode, and while the dramatic material regarding Joan is compelling, everything else is a mess. All the creepy superstitious villagers were red herrings. So were the Americans. The wacky Revelation quotes. Thursday's goofy grin at Buckingham palace is the only positive to come out of this trippy, Midsomer-like ending. (It also reminded me of the Doctor Who episode Hand of Fear, which began with the discovery of an ancient hand and continued to a stand-off at a nuclear power station.)

We're left on what's not-really-a-cliffhanger, since we know Morse never leaves Oxford. Which brings us to our series recap...

My review of the next season premiere: Muse.

The season produced two really strong episodes with Game and Lazaretto. Canticle improved on second viewing, but it's still definitely the low point of the series. As for Harvest, it's not the best finale Endeavour has produced, but its character-driven plot makes up for the rather silly mystery.

The choice to use Joan's disappearance as the engine for a season-long arc is one I'm still torn about. We know Morse's marital status in Inspector Morse, so the painful scenes between the Morse and Joan, while exquisitely acted, don't quite hold the dramatic weight that earlier "Will they kill Thursday?" or "Will Thursday go bad?" arcs did. Plus, how many chances has Morse had to resolve that situation? The scene in Coda when she ran away felt like an ending, then in Leamington, then in his flat...it's starting to feel like Return of the King. On the other hand, that final scene with Joan was utterly heartbreaking, a tragedy worthy of Inspector Morse.

As for Morse's career, we don't need a Regina ex machina to resolve his promotion problems - we need Morse to actually do some investigating. I'm hankering for a return to the conspiracy story lines. Masonic Mysteries here we come.

Despite these criticisms, I did enjoy this season. Shaun Evans continues to grow as an actor, and can now more than hold his own against the towering Roger Allam. Evans and Vickers's scenes together were great. Anton Lesser, Sean Rigby, and Dakota Blue Richards haven't been utilized very much this season - let's hope that changes, because I like all of them.