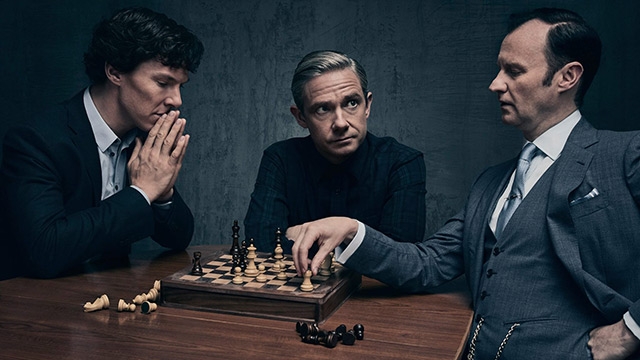 My review of the previous episode: The Lying Detective.

Arthur Conan Doyle wasn't particularly interested in telling us. When we meet Sherlock in A Study in Scarlet, we learn almost everything we need to know about him in his first appearance. He's charming, polite, and a brilliant detective. Beyond an atypical big brother and an unremarkable background pieced together from hints, Sherlock is without a history.

Obviously, in these postmodern times, we can't just leave it at that, so Sherlock sets itself the task of unraveling the mystery of Sherlock Holmes. This is the Great Detective's origin story.


The last episode ended with the revelation that Sherlock and Mycroft had a hidden sibling: Eurus. She's been masquerading as both John's therapist and Sherlock's client, Faith Smith. She's also behind the "Do You Miss Me" Moriarty scam, which is nothing more than it seems: a video of Jim Moriarty, filmed before his death.

But most importantly: she's an insane pyromaniac that Mycroft locked away the high-security prison of Sherrinford, after she burned down the family home, Musgrave. How very Victorian.

Sherlock doesn't really remember Eurus. What memories he has have been translated into a broken, disjointed metaphor for what really happened (a coping mechanism he shares with Eurus). Ever since The Sign of Three, we've heard or seen references to Redbeard, Sherlock's pet Irish setter from when he was a boy. Redbeard, in the newly invented Sherlock Holmes backstory, represents Victor Trevor, Sherlock's childhood friend, who was murdered by his sister, Eurus.

Eurus, then, is the explanation for Sherlock Holmes the man. Even though he can't remember her, Mycroft tells Sherlock: "Every choice you've ever made, every path you've ever taken, the man you are today...is your memory of Eurus." The traumatic memories turned him cold and callous, pretending to be a "high-functioning sociopath." A real sociopath, of course, is no different from a psychopath, and has no emotional guide to morality. In other words: Eurus. Mycroft describes how she used to slice open her own arms "to see how the muscles worked" - which explains the scars Sherlock noticed last week.

After Sherlock and John wheedle (half of) the truth out of Mycroft, the three of them manage to escape one of Eurus's traps (how they do this exactly is left to the imagination - surely jumping out of a second story window would leave a mark? - and why Eurus set this trap when she really wants her two remaining brothers to fall into her reality show/philosophy class on Sherrinford is a mystery.)

The Baker Street boys (plus Mycroft) proceed to break into Sherrinford by commandeering a fishing boat. Mycroft is technically the boss, but he wants to see how secure the prison actually is. When Sherlock finally comes face to face with his nutty sister, he's quickly bamboozled by her scheme to entrap him. It's John that deduces Sherrinford's governor is under Eurus's power and she has been free the entire time.

Eurus then puts Sherlock through his paces in a series of morality quandaries - the trolley problem turned into a game. The series is underpinned by a constant threat: there's a little girl trapped in an unmanned airplane which will crash if Sherlock doesn't go along with what Eurus says.

First up: Sherlock must order either Mycroft or John to shoot the prison governor and thereby save the governor's wife. When both men refuse, the governor commits suicide. Eurus kills his wife anyway. She's not messing around. After this comes a classic Holmes case (The Three Garridebs) in which Sherlock must identify a killer from a series of clues. But Eurus doesn't care about justice: she kills both the innocent and the guilty. Next up: Eurus forces Sherlock to manipulate Molly Hooper into telling him she loves him (a strangely pointless aside), and then in the last, inevitable, stage: to choose whether to kill John or Mycroft.

But it's all a cop out! Because despite a few deaths of unimportant characters, Sherlock never has to really choose to do something controversial, or lose someone important to him. Every member of the main cast survives. It's a weird "reset" episode. The Final Problem goes back to find the origin of Sherlock's eccentricities and flaws, but it also allows us to see him become the "good one" that Lestrade predicted back in A Study in Pink. He finds a way out of the trolley problem by throwing himself on the tracks. Mycroft and John are at their most heroic and sacrificial here too, and the episode ends by returning to the status quo, with our main characters grown into their heroic, Victorian selves.

We're back to the beginning. Nothing lost, nothing gained. Just back to the status quo. And this feels like the end of Sherlock, to be honest. Will it be back? After this episode, I'm not sure. The show has run out of ideas, and is instead plundering other stories. The Final Problem fully embraces its Bond aspirations, throwing in Silence of the Lambs for good measure and ending with a handful of lines and ideas Moffat already used in Doctor Who ("Not on my watch." "Remember me." Unmanned plane in trouble? A speech from a departed female character reminding Holmes of his role might as well have ended with "Be a Doctor.")

If this is the end, it's probably just as well that Sherlock concludes while it still has some dignity. The episode has a lot of ambition, but doesn't have the will power to carry it off. The ill-conceived saga of Eurus Holmes shows that as much as anything. Sherlock's sister is nothing to Moriarty or Magnussen. She's a garden variety sadist who enjoys toying with her victims and spouting nihilistic cant. She's written out with a ridiculously sentimental solution, because it turns out all Eurus really needed was a hug from the brother who ignored her. What is it with this show and women?

Plus, the magic problem. Moriarty and Magnussen were great because their powers were specific and demonstrable. Eurus is so powerful that besides the clever trick with the glass, she never does anything concrete. Basically, she knows things because she has superpowers, not because the writers are going to take the time to figure out how she really knows them. How does she convince Sherrinford's governor to join her cause? She reprograms him. Because, y'know, she's a genius. She looks creepy and can get inside your head, Mycroft explains, with a straight face. At some point, we need to just admit she's magic.

And a detective show that runs on magic is on its last legs. I enjoyed series 4 more than I've enjoyed the show for ages, and while The Final Problem frustrated me, I couldn't look away. But it's time to wrap up. A show obsessed with itself cannot be sustained. If we do get a series 5, then the writers would do well to remember we all fell in love with a detective who investigated mysteries about something other than Sherlock Holmes.

Notes (subject to update as I ponder this episode)