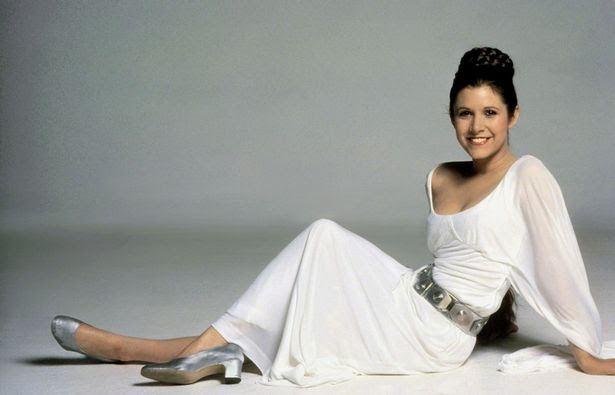 When I went to visit my grandmother the other day, she said, out of the blue: "Leah died."

"Huh?" I mentally ran down a list of people we both know.

"Princess Leah," she explained. And then I understood. Carrie Fisher.

Public mourning is a weird thing, especially for actors. In the last weeks of 2016, a spate of celebrity deaths caused many fans to engage in something...not quite like grief, more like nostalgia. Carrie Fisher was not Princess Leia, but it can't be denied that what most people are missing about her is the white-clad space rebel she portrayed.

And that's even more strange, because Princess Leia is not dead.

It’s true that art and artist aren’t entirely separate things. The image we have of Princess Leia is inextricably connected to the image of Carrie Fisher the actress. But the temptation to blur the line between fantasy and reality is strong.

That's the reason everyone oohed and ahhed over Leonardo DiCaprio’s performance in The Revenant—“he really did those things!” and Tom Cruise’s airplane stunt in Mission: Impossible. It's the reason for Galaxy Quest—a film in which actors from a Star Trek-esque TV show must fight real aliens and become their on-screen selves. It’s the fantasy fulfillment of a deep desire: we want heroes and look for them on TV screens. We transfer that hope to real-life celebrities.

Understandably, this temptation to mix up story and reality has worried Christians over the years. We care deeply about truth, and acting legitimizes a type of lying—actors pretend to be what they’re not. Even more than theater, cinema fragments reality, a process exacerbated by a celebrity culture that scrutinizes the private lives of famous actors. Where does one end and the other begin?


We should be able to appreciate actors for the entertainment they provide, without confusing that entertainment with heroic virtue or even ordinary human greatness. I can appreciate the plumber’s skill in fixing my plumbing without canonizing him.

It’s an important warning, and one we should remember in this era of celebrity-worship. But we can glean more from this phenomenon than just a warning. Escapism can be dangerous, yet it’s also evidence of longing for real goodness in a world that increasingly denies goodness exists. These heroes and their stories are the modern day equivalent of legends. And it's not the Wild West anymore - we don't believe, as they did in The Man Who Shot Liberty Valance, that "when legend becomes fact, print the legend."

What if legend really did become fact? Can you think of a more unexpected and joyous idea?

What if we woke up one day and all the stories had come true?


What if Carrie Fisher really was Princess Leia? What if there were actual intergalactic wars in space and noble knights wielding lightsabers? What if the Force was real? What if every beautiful story - "lies breathed through silver," C.S. Lewis called them - was not a lie?

What if the blind could see and the lost be found and the dead come back to life?

Sounds like a pretty crazy, escapist, wonderful world. But it's the one we live in.

The stories we write don't just spring from nowhere. We look for the truth and beauty of myth where we can find it - sometimes, erroneously, in the form of actors. But that's not completely misguided, because there was a time that a myth really happened.

The Gospels contain a fairystory, or a story of a larger kind which embraces all the essence of fairy-stories....But this story has entered History and the primary world; the desire and aspiration of [fiction] has been raised to the fulfillment of Creation....

It is not difficult to imagine the peculiar excitement and joy that one would feel, if any specially beautiful fairy-story were found to be “primarily” true, its narrative to be history, without thereby necessarily losing the mythical or allegorical significance that it had possessed....The Christian joy, the Gloria, is of the same kind; but it is preeminently (infinitely, if our capacity were not finite) high and joyous. But this story is supreme; and it is true. Art has been verified. God is the Lord, of angels, and of men—and of elves. Legend and History have met and fused.

I don't intend to whitewash the harm that can come from misplaced escapism. It's important to develop the ability to discern between fantasy and reality, but our desire for stories to come true is not a bad thing: it's an arrow pointing to Truth. The inexplicable, irrational joy we feel when stories come true, when a character exists in the real world, echoes the moment when the Author of all stories took on flesh and became a character in his own novel.