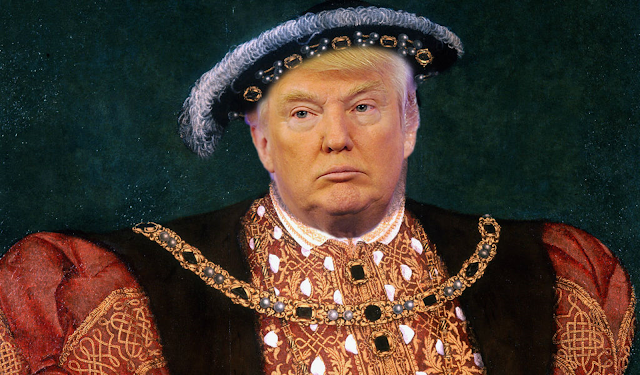 Once upon a time there was a king who knew what he wanted. Bombastic, paunchy and orange, the king was born with a silver spoon in his mouth—a classy spoon, a whole set of cutlery, in fact, the best spoons. The orange king was flexible, changeable, a really strong man. If the king didn’t get what he wanted, he didn’t care if it meant splitting the Christian world in half, he’d get it done.

The king had a difficult relationship with his wife, largely because he was tired of just having one. “We’re gonna split up,” he said. “Maybe we’ll build a wall between us—it’ll be a yuge divorce, I mean, really big, a great divorce. We’re gonna make divorce great again.” So that’s what the king did, discarding his first wife and marrying his mistress. Even then, the king was not satisfied and sought a third, model wife. “I can’t help it, they like me. Alpha males have lots of wives,” said the king. Classy!