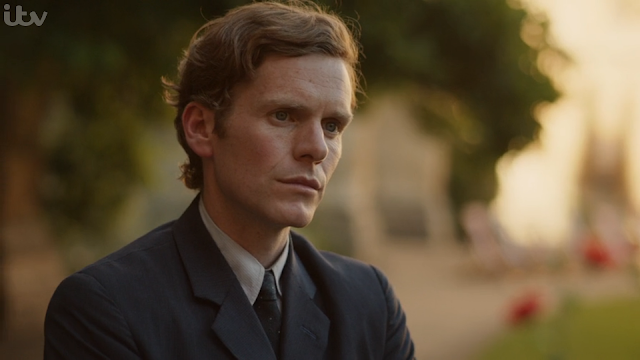 My review of the previous episode: Game.

Mrs. Joy Pettybon is on a crusade to Keep Britain Decent. An elderly widow, Mrs. Pettybon is quick to denounce anything to do with sex, drugs, rock 'n' roll, and - it seems - fun. She's accompanied by her timid daughter, Bettina, and happy-go-lucky colleague, the Reverend Mervyn Golightly. 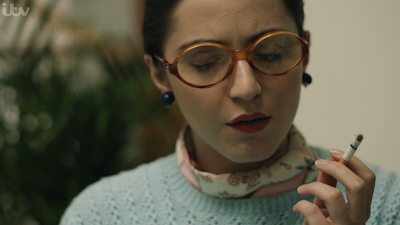 Social conservative with frumpy child? Clearly said child is repressed and longs for freedom from her hidebound mother (or so I thought, reading the summary). And sure enough, Bettina promptly falls for Morse when he arrives to investigate death threats against her mother. Bettina reveals to him her secret life of smoking cigarettes and drinking vodka. She's terrified her mother will find this out and she will go to hell. (Spoiler alert: this is not how Christianity actually works).


The topic isn't necessarily a bad one to examine, but Canticle brings very little of interest to the table. All the main characters are on the right side of history, and there's never any doubt of that fact. Mrs. Pettybon - a thinly veiled stand-in for Mary Whitehouse - is so hypocritical and bitter that she turns into a caricature well before the half-way mark of the episode. Add in a sympathetic gay magazine editor - Dudley Jessup - whose life Mrs. Pettybon destroyed, and she's pretty much checked every box in the Evil Prude Bingo. It's all a bit tedious.

But let's not forget the other half of the episode, which is devoted to the antics of a popular boy band called The Wildwood. The first body discovered in the episode is that of Barry Finch, a laborer who worked on the estate where the band is hanging out (Lewis fans will recognize the location from Whom the Gods Would Destroy). 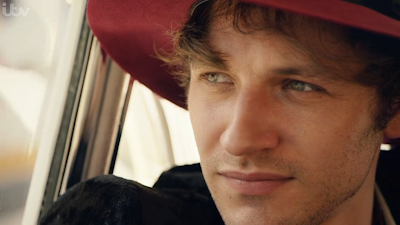 The Wildwood is led by Nick Wilding - whose poetic aspirations alienate him from the rest of the band. He's sleeping with both Emma Carr and Pippa Leyton - a pair of young groupies - but he seems unusually upset about Barry Finch's death. The rest of the band consists of Nick's fierce brother Ken, the laconic Christopher Clark (secretly married to Anna-Britt) and drummer Lee "Stix" Noble. Lastly, there's their manager, Ralph Spender, who is quick to pooh pooh any hint of scandal, and lounges in elegant buildings that contrast dramatically with the bohemian lifestyle of the band.

Speaking of which, this is a glorious episode, visually. A fun opening sequence features brightly-clad dancers on an Oxford lawn (and original music from Russell Lewis and Matthew Slater). While the stand-out images from last week came from the eerie, atmospheric pool, Canticle revels in the vivid colors of The Wildwood's Bright Young Things, recalling the slightly otherworldly world of Joss Bixby in Ride.

Of course, there are more drugs involved this time, which brings to mind a Morse episode I recently revisited: Cherubim and Seraphim. In that episode, Morse is befuddled by insular teenage communities. He can't believe that his niece, Marilyn, could be involved in drugs and parties. When his colleague, Lewis, describes trying drugs years before, he's puzzled, as he is in this episode, when Thursday mentions trying kief in the desert.

Even in Canticle, Morse is a man out of his time. As Nick Wilding rambles on about their generation's search for enlightenment, he notes that Morse is wearing a suit. Morse doesn't fit in with the 60's, like Trewlove, or even the WWII era of Thursday. It's easier than ever to imagine Shaun Evans morphing into his older, contrarian self. 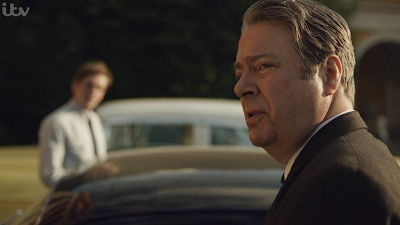 As for good old Fred, he's still taking Joan's loss hard, snapping at Win and refusing to discuss the situation without a scowl on his face. After a full season of Dark Thursday, I kind of wish we could get back to the heroic side of everyone's favorite mentor, but presumably this thread is going somewhere, since Morse appears to be in contact with Joan. (By the way, what's ever happened to poor, neglected Sam Thursday? Not a tear shed for his absence.)

All in all, Canticle's a bit hit or miss. It's competently directed, and I was never bored, but the melodramatic resolutions to its two main plots are unfortunate. I'm still invested with the main characters, but I hope for a better, more nuanced case next week.

My review of the next episode: Lazaretto.