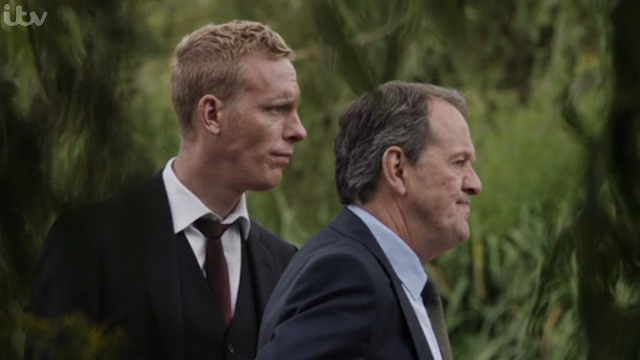 My review of the previous episode: One For Sorrow

It's not often I'm erudite enough to recognize the names or references that flit through your average Lewis episode, but the instant a character in the opening to Magnum Opus referred to Charles Williams, I jumped out of my seat. In fact, Williams’s name had already sprung to mind when the soon-to-be-dead college don Phil Beskin referred to the Bible's injunction to "bear ye one another's burdens."

Phil Beskin, murdered and laid out in a sinister ritual, loved Williams, fashioning an ideology around the late theologian’s ideas. Williams was a treasure trove when it came to occult belief, and the murder itself seems to have something to do with alchemy (the episode alleges there was no connection between the two, but commenter Grevel Lindop assures me otherwise). Lured into the woods by a text message from a student, Gina Doran, Beskin is killed and covered in leaves and maggots in a wooden hut. As Lewis and Hathaway further investigate the case, it appears that Beskin is the first of four killings, each planned to fulfill the steps of an alchemical process known as the magnum opus.