My name is Longish and I approve this video:

There is more
More than we can see
From our tiny vantage point
In this vast eternity
There is more
...There is more than what the naked eye can see
Clothing all our days with mystery
Watching over everything
Wilder than our wildest dreams
Could ever dream to be
There is more
-Andrew Peterson "More"

I don't suppose I've mentioned it yet, but I'm a member of a celtic band. Night Crossing just played at the Celtic Festival in Big Stone Gap. Got to meet a real, live Scotsman. Somehow, one never expects to meet someone with a British accent outside of TV. I could've listened to him talk all day. It was like...Alistair Begg was right there. Except his name was Jack. I admit, I was terribly tempted to ask him if my accents were realistic, but I missed my chance.

Cheerio,
Longish
Neo-Mayberry, Middle of Nowhere, America
Posted by Hannah Long at 9:14 AM No comments:

To Be or Not To Be, Despair or Drudgery? - My review of Hamlet

﻿ ﻿
Everyone knows a little bit about Hamlet, but I didn’t know how great the play's effect on culture truly was until I began reading it. Immediately, I started recognizing phrases, such as “Neither a borrower nor a lender be”, or “To thine own self be true” which I always thought were just old sayings. Not only was it easier to understand than other Shakespearean plays (though, admittedly, the last one I read when I was fifteen), but the story is intriguing and quick-paced. And, also to my surprise, it makes broad true statements about humanity, the Fall, and the futility of revenge.

Hamlet himself is a perfect example. At the beginning of the play, he in a state of hopelessness and desperation. In a nutshell, his father is dead, his mother has married his uncle, and Hamlet ain’t happy about it. Not an enviable state of affairs, but Hamlet’s despair has advanced to the extent that he wishes “the Everlasting had not fixed/ His canon ’gainst self-slaughter.” When it is revealed that his father was murdered, Hamlet’s despair ignites into a passionate and near obsessive desire for vengeance. He justifies it to himself by saying that Claudius is a murderer, and in fact, he is just the hand of God meting out justice.
Read more »
Posted by Hannah Long at 3:47 PM No comments:

Am slight worried. This looks so much trendier than LotR. I hope it's not all about the visual effects and magic stuff. It could be a disaster if PJ makes it Harry Potter does Middle-Earth. Of course, anyone that could write a scene like that one with Sam in Osgiliath must be amazing. Fire ahead, Phillipa and Fran!
Posted by Hannah Long at 9:39 AM 3 comments:

Email ThisBlogThis!Share to TwitterShare to FacebookShare to Pinterest
Labels: new trailer, Peter Jackson, The Hobbit, The Lord of the Rings 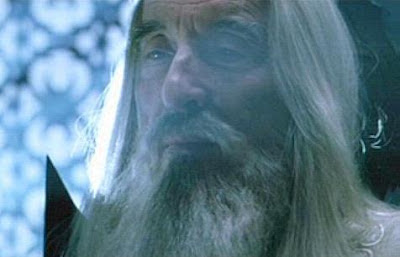 Continued from I Liked White Better - Part One.

Saruman stands in stark opposition to the doctrines of Christianity. They teach that the weak and the poor are the ones that have the most to teach us—and, because of that, we should care deeply about how they are treated. God himself came to our world and was willing to be viewed as the bastard son of a poor carpenter from an underprivileged town which everyone (even inhabitants of the equally despised region of ) shunned and avoided. He never attempted to get in the In Crowd; he never tried to look like one of the Wise.

Instead, he was firmly on the side of ordinary people, rather than those with Much. He was, theologically, a hobbit—one of the little people from a fly-over state. He was against the rich, but not just those Communists call bourgeoisie, the rich in material goods, but those prosperous in smarts or special talents. Not that possessing those things is bad (after all, he did give them to us), but not admitting that they are a gift is a great sin—akin to “blasphemy against the holy spirit.”

"Truly, I say to you, only with difficulty will a rich person enter the kingdom of heaven. Again I tell you, it is easier for a camel to go through the eye of a needle than for a rich person to enter the .”
(Matthew 19:23-24 ESV)

Read more »
Posted by Hannah Long at 4:38 PM No comments:

The Songs We All Knew

I tend to be a little star-struck when it comes to the small group of people I think are famous. There's a certain group of amazing Christian musicians in Nashville who congregate on a website called The Rabbit Room (after the Eagle and Child pub, of Inklings fame). I only discovered them two years ago, but since then, we have acquired six Rabbit Room books, ten or more Rabbit Room albums, and check in frequently on the site for new posts. The Rabbit Room's proprieter is a singer/songwriter/author named Andrew Peterson.  He's such a household name with us that I can just say “Andrew said on Facebook earlier…” and the rest of the family will know exactly who I’m talking about.

Last year, after I met Michael Card, I said "Now, I just need to meet Andrew Peterson, and life will be complete. " A few weeks ago, I did meet him (at a concert in Winston-Salem) and he signed my copies of his books. My life is not, in fact, complete, but as soon as someone sends me a private plane and tickets to The Hobbit premiere, it will be. Make it happen, readers.

The Captains Courageous (their unofficial name) were terrific live. Andrew, Ben Shive and Andy Gullahorn, (the other Captains) were hilarious, making fun of one another or providing the sort of witty banter than makes shows better than CDs. We were fifteen feet from the stage, on the front row. With each song came an amusing and interesting tale; not only is he a gifted songwriter, but Andrew's a real storyteller too. He's like our pastor, Don, who can tell a joke and have us all in stitches, but when I tell it the next day...blank faces. Some people are just Funny when they're talking about anything. See the The Cheese Song.
Read more »
Posted by Hannah Long at 5:12 PM No comments:

G.K. Chesterton is most likely my overall favorite author. Yes, I love Tolkien, and I'm sorry, but he only wrote epic fantasy, he didn't also write amazing stuff on theology, politics, apologetics, travel, cheese, humor and detective fiction. Chesterton wrote about everything. And not only that, but he wrote about everything well. He was charming, funny, and brilliantly clear. He, like C.S. Lewis (who, like Tolkien and Gandhi, was a Chesterton fan), was extremely smart, but so down-to-Earth that anybody can understand what he wrote.

So now, that's my little ode to Chesterton. I could really go on, but if I did, I probably wouldn't stop.

Hearing that his detective, Father Brown, will once again be brought to life on the screen ought to have me dancing in the streets (though I'd have to run half a mile to find one). All the same, I'm rather worried. I'm an enormous fan of the sleuth, but I have a hard time seeing him portrayed in a way that is more interesting than the books.

I've watched a few of the Kenneth More episodes and found them rather boring (Alec Guinness - yes, he who, to his chagrin, would always be known as Obi-Wan - was slightly more interesting). However, I must say, seeing that there will be some regulars on the show (to serve the purpose of a Watson or a Hastings) predicts a more entertaining run. Also, Hugo Speer will be one of them, and he was wonderful in Bleak House. It would be very cool if they were set in the modern day - and I really hope they're true to their very religious themes. Chesterton used Father Brown all the time to showcase his love for paradox and the beauty of God's creation. We can only hope the BBC does the same.

Another mystery show to add to the 2013 list - along with Poirot, Foyle's War, and Sherlock.

Tip of the day: NEVER phone the detective to provide vital evidence in an empty room with your back to the door and no gun.