Why You Should Listen to Cabin Pressure

I feel a little bereft today. It's like the moments after a huge party and the guests have left and the house seems all echoey. That word - echoey - makes me even sadder, because it sounds just like something Arthur Shappey would say, and Arthur Shappey is no more. He has ceased to be. He's expired and gone to meet his maker. He is an ex-Arthur.

Am I being melodramatic, considering Arthur Shappey is a character from a comedy radio show that I just finished yesterday? Well, probably. While he's not literally expired and gone to meet his maker (he and brilliant show writer John Finnemore are, in fact, one and the same), his absence in my daily listening leaves a huge hole. And it's not just him. Over the course of four seasons, all the cast have grown so familiar they feel like old friends. As for the show itself, I permanently keep all 26 episodes on my iPod, ready at hand should I desire to evangelize some prospective new fan or simply need a laugh to keep me going, because Cabin Pressure is invariably clever, funny, and intelligent, and definitely my favorite radio program of all-time.

A plane is the a perfect setting for a radio sitcom: the same characters are confined to the same setting for long periods of time—but given a limited budget, the variety of exotic locales they visit could only be simulated on the air (from Abu Dhabi to Zurich). The cast is simply extraordinary - they combine impeccable comic timing with serious dramatic acting chops. Stephanie Cole is best known as Doc Martin's Aunt Joan. Roger Allam currently plays Endeavour Morse's salt-of-the-Earth mentor. And Benedict Cumberbatch...well, he's everywhere. (And for me, much of the show's pleasure is geeking out that Sherlock and Fred Thursday are flying a plane together.)

The cast comprises MJN Air - a tiny charter airline consisting of one dilapidated plane named GERTI, whose owner, Carolyn Knapp-Shappey (Cole), won her in a divorce settlement. The two pilots (captain and first officer respectively), Martin Crieff (Cumberbatch) and Douglas Richardson (Allam) have ended up at MJN for very different reasons. Martin is here because he couldn't make it anywhere else. He's insecure, anxious, a control freak, a really bad detective.

The first officer, Douglas Richardson is Martin's exact opposite: laid-back, suave, and sardonic. He has all the skills of a con-man, which come in useful in the many scrapes into which the MJN crew fall (and also resulted in his firing from Air England). These differences inevitably mean Martin and Douglas are almost constantly at war over decisions.


The scrapes themselves borrow from Wodehouse in their complexity, absurdity, and hilarity. Who could forget Martin and Carolyn carrying a stuffed sheep through a thunderstorm? Or Douglas working Hitchcock films into his safety warnings? The many adventures of the Travelling Lemon? Or that one time the crew discussed crowding a hundred otters into GERTI, or Carolyn and Douglas had a bet on about who would say a polysyllabic word first, or Douglas forced Martin to fake a French accent and give a lecture on polar bears? Well, you had to be there.

Carolyn regards GERTI and the screwball antics of her incompetent crew as a way to avoid boredom and conveniently employ her impossibly naïve 28-year-old son, Arthur Shappey (show writer John Finnemore). Arthur’s the heart of the crew. Martin, Douglas, and Carolyn are all more than the broadly written stereotypes they first appear, but there are no secrets about Arthur. For him, dissimulation is a foreign concept. Cheerfulness is his one mood, and in his sunny, vivid world falls not a shadow of cynicism. With Arthur around being a less self-serious version of Forrest Gump, it's difficult to get too "adult." And perhaps the most extraordinary thing about Cabin Pressure is its steadfast refusal (generally speaking) to resort to crude innuendo, snide political commentary, or bitter antiauthoritarianism—three props of comedy everywhere. While there’s the occasional easy joke, comedy generally springs from situational humor, word games, sheer cleverness, and character drama. And drama there is, but also closure: instead of the usual Sisyphean sitcom cycle, these characters do really change and grow (some more than others). While Carolyn's past marriages are often a subject of fun, there is real weight to romance when it does enter the character's lives. Love - and marriage - are ultimately more than a joke.

By the end of the series, a level of storytelling has been reached that aspires to Pixar heights. As the credits rolled on the final episode (John Finnemore brings the series to a perfect close), I felt...well, as I said, bereft. But like all great comedies, it never really ends (because no one ever dies!), and I suspect that GERTI's still out there limping along majestically through the sky, while the traveling lemon...well, that could be anywhere. 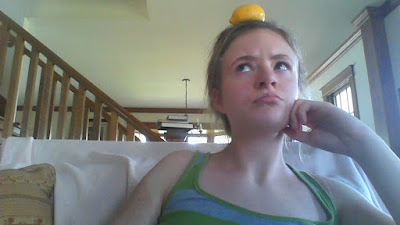