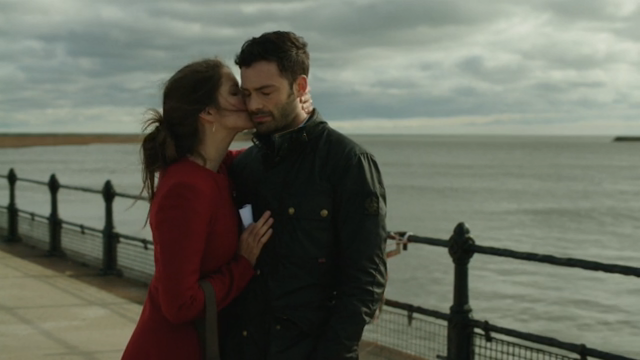 Season 3 episode 1 - Castles in the Air.

Vera and Joe are called in to a shooting. Three girls were vacationing in a rented house and one, responding to a noise, stepped into the night, just in time to catch a broadside from a shotgun. As the two detectives interview suspects, they discover the woman was universally loved. Perhaps the wrong target? Soon enough their suspicions are confirmed, when the real victim catches it.

This leads to the usual twists and turns, interviewing friends and acquaintances, until everything’s wrapped up in a rather far-fetched ending. Tense - but featuring a (spoiler) character so underdeveloped that I had trouble caring.

Other things are going on, however. Joe meets one of the first men he arrested: as it turns out, wrongly. Being the wonderfully virtuous person he is, he can’t help but feel guilty about this, and on his wife’s advice, confronts the man. It’s painful and probably too brief to really free Joe from such an obligation, but I appreciate a show that will create a hero willing to face his mistakes rather than brood about them endlessly. Many a show would have taken the opportunity to make Joe haunted and guilt-ridden - instead he does the right thing, and it’s a relief and the opposite of a cliché.

In addition, it’s nice to see Celine as such a positive, present character. It’s so usual to either write off a detective’s other half as part of me-wife-and-kids (I’m looking at you, Robbie Lewis), sinned-against or sinning (see the partners of John Bacchus and Paul Milner, respectively), or villains (cough). But Celine is a pleasant, intelligent wife and mother, never condescended to, never naive. (Also, hey! I just realized she plays Morse’s sister in Endeavour.)

Bethany is no longer in evidence - instead we have D.C. Mark Edwards, who’s been around in a minor way since Little Lazarus.

Overall, a decent, nicely shot episode. It doesn’t have the nuance of the episodes based on books, but that’s a constant. Brenda Blethyn and David Leon are as good as ever.

Another basic episode, this one has a more interesting, if slightly predictable premise. Two teenage girls are abducted by a man after he murders their father. One of girls - “Mira” - was adopted, an Iraqi war orphan. An award-winning photograph of her nearly sank the war effort. The photo showed her peering up from the wreckage of her home - her entirely family killed in the blast.

There are a few suspects - Mira’s sister, Karen, has a sleazy boyfriend named Kyle. The photographer who took the picture of Mira is hanging around, suspiciously (even more suspicious, he’s played by Ray from Life on Mars).

Vera and Joe find the mystery takes them deep into Mira’s past. The further they get, the more obvious the solution becomes. It’s hard to blame the detectives, however, because it’s a convention of murder mysteries that (spoiler) if you don’t see the bodies, chances are they ain’t dead.

Office politics are still up in the air. Bethany’s not around, and instead of Mark Edwards, the focus lies on D.C. Barry Kelman, an over-achieving new kid on the block. Thanks to Vera, Joe is being pushed to his absolute limit, getting very little sleep and working in incredibly stressful situations.

But despite all that, Joe being Joe, he has time to pester Vera about her personal life. As they think about the love between the two sisters - Karen and Mira - Joe encourages Vera to seek out her own sister. Of course, she brushes him off, but as per usual, his words are the only ones that stick around to bother her, pushing her out of herself.

Well, here it is - the exceptional one. Vera, as a show, is always good, but it seems that, on average, there’s one really amazing episode per season. On first viewing, I think Young Gods is not quite up to Silent Voices or The Crow Trap - there are a few things that don’t work - but it’s still the best I’ve seen this season.

A group of teenagers are hanging out on the beach when they hear screams - a man engulfed in flame appears on the rim of a ridge, plummeting into black water. By the time they get there, it’s too late - Gideon Frane is dead.

Vera and Joe quickly find out Gideon wasn’t exactly Mr. Popularity - he’d been harassing his ex-girlfriend, Izzy, for months, to the point that she fled her home and moved in with a gay friend (who is part of a particularly hilarious subplot involving Kenny’s new hair-do). Gideon has a history of violence - an old girlfriend attempted suicide and disappeared, but were her injuries really self-inflicted? And where is she now? The incident was downplayed at the time, leading Vera to suspect the headmaster of Gideon’s prestigious school: Vivienne Ripman.  Also involved was Gideon’s friend Jamie Levinson - it’s when Vera and Joe visit him that things get really interesting.

Bethany has finally been replaced, by Shep from the second season episode Sandancers. I wasn’t a huge fan of her character in that - she seemed more a type than a person, and I’m not sure she’s improved here. Professional, efficient - she’s less interesting than Joe, less cantankerous than Kenny. But I suspect there’ll be more development in the future, and for the moment, she makes for an interesting change in dynamic. Besides Joe, she’s the only person who has an inkling of what Vera’s really like. After snapping at Joe, Vera feels the need to explain herself to Shep - and Shep clearly, quickly intuits the foundation of their relationship: that Joe is aware of Vera’s essential insecurity and puts up with her acerbity because he both pities and respects her. And he loves her enough to care that she changes.

But while Joe is the only one who bothers to fuss over Vera currently, he wasn’t always - his predecessor was Vera’s old mentor, Sister Benedict - an intelligent, sweethearted obviously saintly old nun in whose hands Vera is putty. Who saw that coming? But it’s lovely - this confident woman who had faith in Vera, and thereby saved a young girl from self-destruction. She - like Joe, like Shep - saw past Vera’s bluffing.

There are other notable events among the secondary cast. Billy the Pathologist has a funny moment, though I really, really wouldn’t have pegged him as a Bruno Mars fan (and this may be playing the Billy’s-unrequited-love-for-Vera gag a bit too straight). More touching - his confession to Vera that this particular death is really bothering him.

Overall, a strong showing from all the regulars, and so with guests. The story kept me guessing as to the killer up until the end, and I only guessed it in advance because [SPOILER] of a certain august actor’s presence. The confrontation and Vera’s Christopher-Foyle moral smackdown make this one of my favorite episodes so far.

A young girl - a handsome man - an offer - a dark alleyway. You think you know how this is going to end, but when Janna catches up with John, he pitches forward, smearing her coat with his blood. He’s just been stabbed.

Vera is quick to rule the girl out, and Billy diagnoses the hit as something more professional, which means this wasn’t a random mugging. Locating John’s car and flat, Vera and Joe discover he was a police officer. For some time, he’d been working as a security guard at the brewery of his sister’s fiance, Sam Harper. Knowing John was a bit of a lady’s man, Vera suspects that he may have had a relationship with Harper’s daughter. The plot thickens when they discover John’s old flame living nearby - her husband is abusive and she longed to leave him.

While all this is going on, Vera is acting very odd about one of the witnesses - a waitress called Carrie Kinsdale. My ears perked up immediately - a few episodes ago we learned the name of Vera’s long-lost half-sister: Cara. Joe knows something’s up, but it’s not till three quarters of the way through the story that he puts two and two together. Vera does her usual theatrically oblivious turn, but by the end, she’s decided on a course of action that gracefully brings the thread to a close.

Overall, an interesting installment, with a few twists which strain credulity, but good performances from all.

My review of season 4 of Vera.