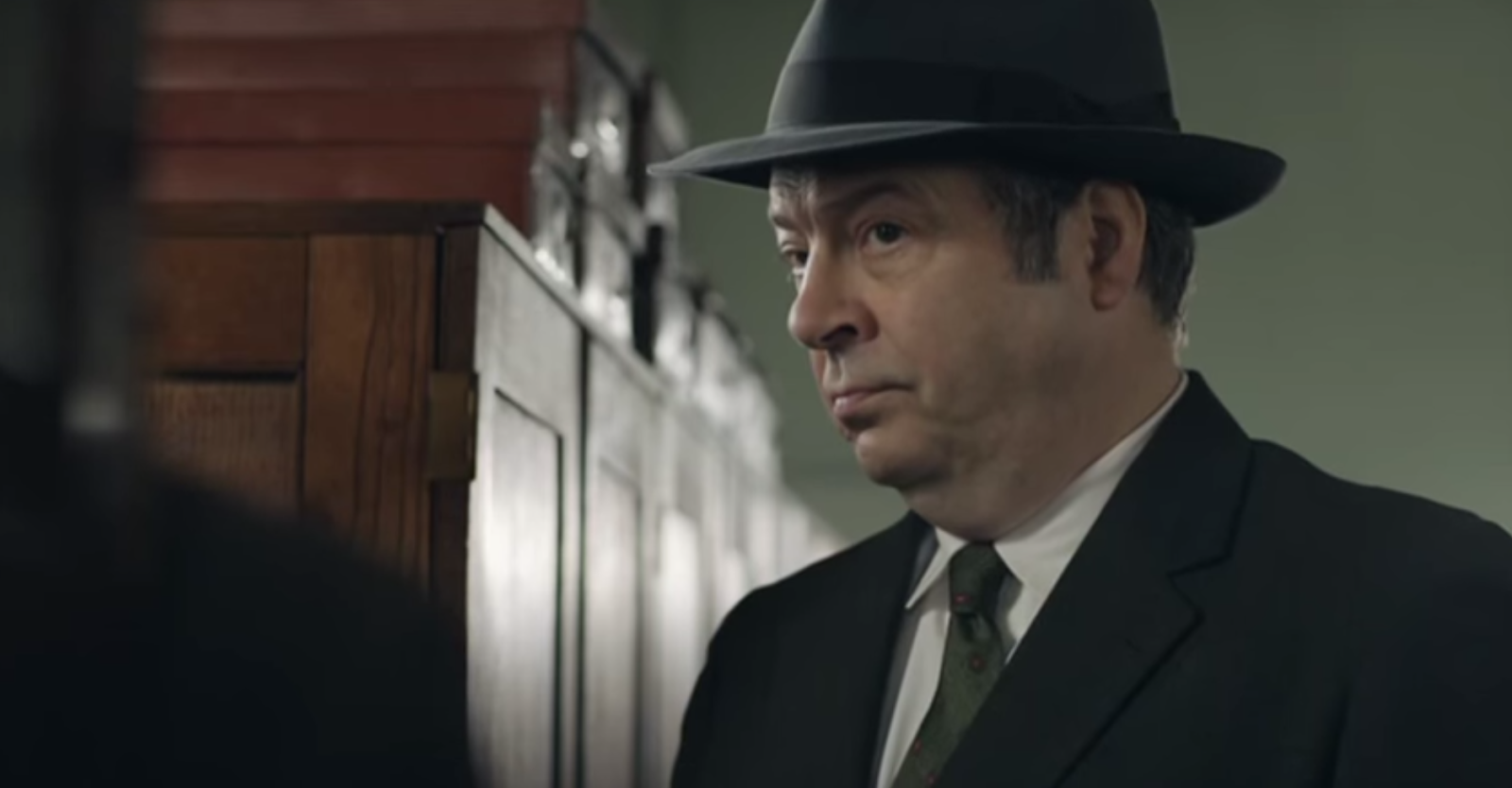 The season finale begins with Nunc Dimittis, the Canticle of Simeon (here's a good recording):

Lord, now lettest Thou Thy servant
depart in peace
according to Thy Word,
for mine eyes have seen Thy salvation
which Thou hast prepared
before the face of all people.
To be a Light to light on the Gentiles
And to be the glory of Thy people Israel.
Glory be to the Father
And to the Son
And to the Holy Ghost,
As it was the beginning,
Is now and ever shall be,
World without end. Amen.

The music is intercut with scenes of D.I. Thursday who, like Morse at the very beginning of the season, is taking a medical exam. Resembling Simeon, Thursday feels the encroachment of age, and the advent of a younger generation. We’ve always known that, however enjoyable, the Thursday-Morse partnership couldn’t go on forever. From the first moments of Neverland, we feel that gentle shift begin.

Endeavour is certainly hitting all the common detective series Trope episodes early on. Usually, it takes a few seasons before we have the Serial-Killer-With-A-Vendetta-For-Our-Hero episode, or the Meet-The-Family episode, or the Old Flame episode. Endeavour used all three in the first season. I initially thought this week's installment was a repeat of Fugue - a Serial Killer thriller, but it turns out the mystery itself is secondary to the emotional drama of an Old Flame.

Here's the thing though: for once, it's not Morse's old flame, it's Thursday's. This gives quite an unusual texture to the story, and once again focuses more on Morse's boss than the protagonist himself (I'm not complaining). Like Home, another Thursday-central episode, a pivotal theme is family. Sway focuses on marriage, love, and fidelity. (Spoilers ahead.)

The story itself comes second to the character drama. A serial killer is on the loose in Oxford (once again), strangling married women with a pair of fancy silk stockings. Morse tracks the stockings to a department store called Burridge’s, where a number of highly suspicious men stalk the stocking aisles. In the course of these investigations Morse meets an Italian woman named Luisa, who, the instant Thursday enters the room, collapses in a dead faint. This scene was probably a lot funnier than it should have been. 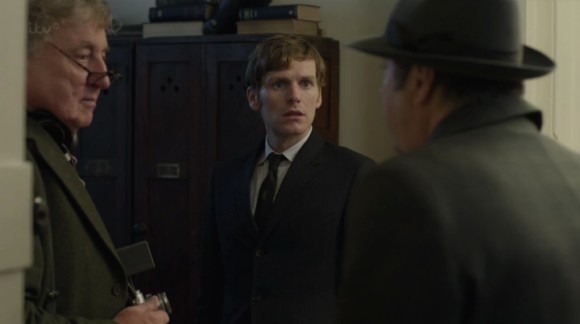 This week’s episode of Endeavour takes a Scooby-Doo twist, complete with a haunted mansion, creepy little girls, and a historical mystery. Most series have one or two murder-in-the-past episodes, practically all the Sherlock Holmes short stories have some link to history, with Poirot it’s Five Little Pigs and Elephants Can Remember, with Father Brown The Sign of the Broken Sword, with Morse The Wench is Dead.

Endeavour goes back to a mass murder in the 1800s. Morse becomes involved while investigating a murder in a museum. Questioning witnesses leads him to a girls’ school, where a small band of students are staying for the summer holidays. Soon enough he senses foul play and delves into the place’s history, discovering the legend of Bloody Charlotte, the only survivor of the Victorian massacre, and possibly the culprit.

Needless to say, this means the house is haunted, and quite a few heart-thumping sequences ensue. Honestly, Morse and Thursday (while showing their usually quality) take backseat to the small, earnest drama in the school, and the excellent performances from the young actresses.
Read more »
Posted by Hannah Long at 11:20 PM 6 comments:

Silence - The Cruelty of Tolerance

I’ve never met Brendan Eich. I really don’t know much about him, except that he is now without a job. I'd assume, since he was formerly a CEO, that he’s not living on the street. But it may not be long, given that the marketplace is now hostile to those who disagree with American cultural mores. A question. Where, exactly, is it okay for Mr. Eich to be employed? The local 7/11? A small private business never visited by the self-proclaimed tolerance police?
Let me start off by quoting this excellent piece over at Kevin DeYoung's blog, speaking about society's acceptance of same-sex relationships:

The problem is that our ascendant moral logic amounts to an imposition: affirm me or else. It used to be that tolerance meant granting to your intellectual, political, or religious opponents the right to be wrong (as you see the wrong). Now tolerance means the freedom, if not the obligation, to utterly shame those you deem intolerant. Ours is a supremely moralistic age. I would call it puritanical, except I don’t want to insult the Puritans....

There is no conversation any longer, just condescension. No acceptance of diverse viewpoints, just personal obliteration for anyone who dares to question Oceania’s Ministry of Truth. The talking heads and the purveyor’s of cultural correctness don’t feel the need to make arguments anymore. They don’t feel the need to listen either. After all, who can refute a sneer?

No need to prove your dogma when stigma will do.

Read more »
Posted by Hannah Long at 6:54 PM No comments: 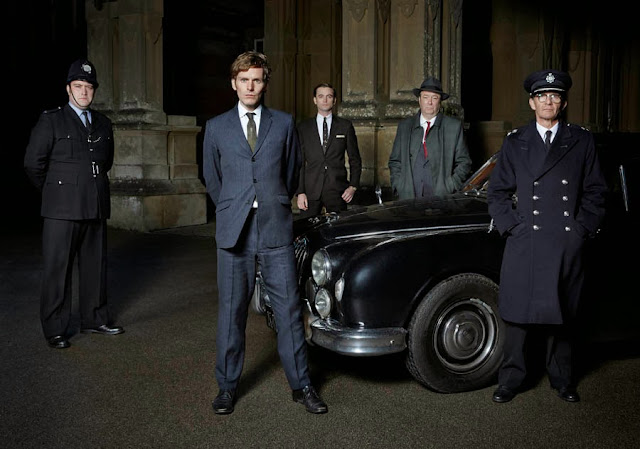 Endeavour Morse has always been the Doctor Who of detectives—a dynamic main character who draws us through plots of varying degrees of ridiculousness. If you can’t laugh at the inherent absurdity, it simply will not work. This episode is particularly tangled, with three wildly different threads turning out to be connected. I think.


Shaun Evans and Roger Allam return for a second series of this popular prequel to Inspector Morse, starring as, respectively, D.C. Endeavour Morse and his mentor-cum-sidekick, the lovingly decent Inspector Thursday. Overall, the episode is a welcome return to the homicidal society of Oxford (I immediately smiled to hear the closing theme song).
Read more »
Posted by Hannah Long at 11:03 PM 4 comments: