Has there ever been a more British threat than a promise to imperil a boy's cricket skills? Obviously disconcerted by such grim portents, Tommy Beresford - left, last week, in the hands of the communists - caves to the wishes of his sleazy captors. Big villain Mr. Brown needs a file from MI6, so bumbling bee-man Tommy is obviously the man for the job (never mind that Mr. Brown could probably have gotten it himself, but more on that later.) 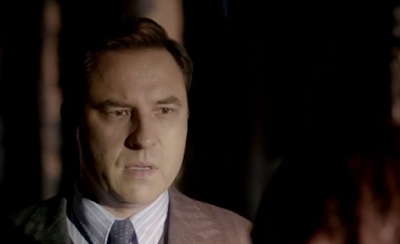 Having terrified Tommy with grim promises concerning young George's cricketing future, the bad guys drop him off somewhere in London, and he glumly finds his way home. Once he's there, he has to fend off Tuppence's cascade of questions. Thankfully, a host of distractions are available. Smooth Julius Hersheimmer is still around, much to Tommy's dismay - and even worse - wearing Tommy's cardigan (the horror). Then along comes Albert, who's fun but still hasn't quite found his place in the series.

George's imminent danger has really brought Tommy out of his shell: in what may be the most Agatha Christian moment in the series so far, Tommy fights off an insistent villager while he's trying to receive a secret call. And he's becoming a more accomplished liar: he manfully fibs his way through a debriefing before a board of sinister smoking men. (Here is introduced a possibly entertaining minor character named Bulldog.)

But Tommy's ingenuity is about to run out: when Tuppence finally corners him, he confesses and asks for help. Happily, she trusts him enough to give it (the show's already tried to manufacture drama by throwing mistrust into their relationship: it doesn't work). Acting on Tuppence's orders, Tommy sets off the fire alarm while she steals the file. Recruiting Albert, they then deliver the file to another set of sinister, dimly-lit suited men (this is starting to feel like The X-Files) and simultaneously plant a tracking device on the bad guys' car.

After a half-hearted assassination attempt from Mr. Brown (really, a bomb would have been more efficient), the two vow to abandon detective work forever. Tommy's pleading - "I'm just a man" - and Tuppence's softening combine to form the most touching moment between the Beresfords so far. Do I believe they're a married couple? Still working on that, but they're coming along. Not everybody can be Mulder and Scully.

Finally, back at Beresford HQ (which has been pilfered by a group of thugs who conveniently leave behind the one item they could use), Tommy deduces that Jane left the tape in the box with their queen bee. Anassa is "queen" in Ancient Greek. Before they can translate the message (it's in Russian), Julius appears wielding a gun (trigger-happy Americans) to steal it, be struck by Carter's car, and summarily confess: "I am Brown."

As our heroes suspect, there's more to the story, and it's not long before they discover that the only other suspect, James Peel, is the real guilty party (which begs the question: why did he need Tommy's help to steal the file? But okay). The Beresfords manage to foil his evil plot using Tommy's honey (a nice touch, and surely a useful marketing perk for Beresford Honey in the future). Peel now, in a sudden attack of kamikaze nobility, decides to end it all rather than fight his way past an old man and two middle-class apiarists.  (Who knows: maybe Carter's got some killer moves he's keeping quiet about.)

This episode manages to accomplish three things I've been desiring. David Walliams abandons his glum quiet guy act and tries for something more charming: a not unintelligent, courageous father and husband, turning his clumsy reputation to his advantage and willing to risk everything to protect his son. I can root for that guy. Secondly, Tuppence mellows and the two actually begin to have some chemistry. And last, the pacing finally picks up, as the two dash about dealing with betrayals, showdowns, and assassinations. The scenery is more varied and interesting, and it seems to have genuinely found a sense of thrill rather than terror.

Will that stick around? I hope so, and I'm willing to give it a chance.