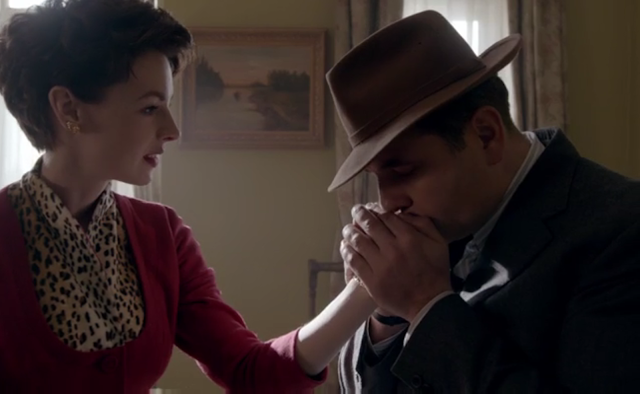 Rules of the game: if a character is suspicious, you should look elsewhere for whodunit. Since last week found us pointing the finger at the quirky psychologist couple, the sprightly Mrs. Sprot (who Tommy likes), and the cunning Carl Denim (who Tuppence likes), it seemed a fairly safe bet that one of our other suspects would be the culprit.

As it turns out, that's partly right. There are only three left: Commander Haydock, Veronica the Polish Maid, and Sheila the owner and Haydock is played by Adam Dalgliesh. As anyone knows, when a detective has a guest role on another detective's show, his chances of being the villain are incredibly high (evidence abounds: Martin Shaw, Michael Kitchen, Laurence Fox, and Kevin Whately have all been murderers). 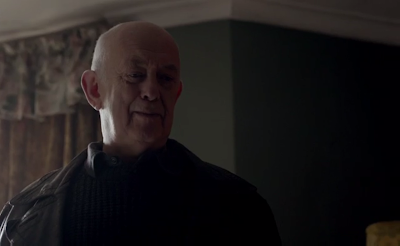 And sure enough, Haydock is indeed the villain. When he finds a groggy Tommy on the beach (dumped by Carl Denim), Haydock brings him to his house, and gives him a milky drink ("Tommy, you idiot - haven't you seen any detective shows?") which makes him woozy. Having neutralized Tommy, Haydock begins spouting Scooby-Doo baddie lines and evil laughs (I feel for the poor fellow - he's come down in the crime world.) While the show has never exactly possessed sparkling repartee, the dialogue is unusually bad this week - and with none of the charm necessary to pull it off.

Elsewhere, Tuppence hitches a ride with Sheila the owner, and finds her involved in a smuggling operation with German-but-innocent Carl Denim. These two criminals seem like trustworthy sorts, so Tuppence recruits them to help her rescue Tommy from Haydock's clutches. Responding to the call of queen and country (it's 1952, so it's just now become "queen" rather than "king"), the two quickly buy Tuppence's outlandish story and are raring to fight terrorism. As it turns out, Tuppence didn't even need their help, because with a bit more gumption than usual, she manages to rescue Tommy and Gilbert the atomic scientist guy, who's been held by amateur terrorist Dalgliesh for several weeks.

The Beresfords then attempt to convince Gilbert to give up the location of the all-important key (my memory is fuzzy, what's it open, again? And would you really secure an atomic bomb with a key?). Gilbert is uncertain whether to trust the couple (have these spies never heard of code words?), but he eventually acquiesces - the key is hidden behind the bird picture at the hotel. 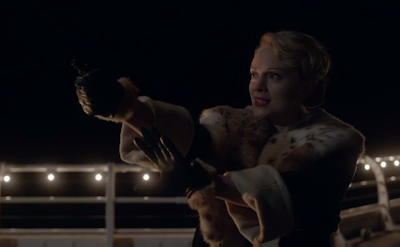 This prompts N to reveal herself - and while it seemed like Polish Maid, the one superfluous character, was the obvious choice - it turns out to be Mrs. Sprot. This one bit of plotting misdirection is far overshadowed, however, by the glorious stupidity of the climax. Mrs. Sprot's goal is, in fact, merely to rescue her lover from prison. He's dead (the woman can make it away with an atomic bomb, but can't figure this out). However, Tommy looks enough like him that Carter decides to use his nephew as a double in a seaside showdown.

I'm the last person to call sexism without good cause, but really, couldn't they come up with a better motive for this shockingly incompetent female criminal than some debilitating love affair? (Was it that way in the book? Was any of this in the book?)

Even worse: when Sprot finds out her lover's dead, she immediately goes to pieces, begging Carter to kill her, then there's the usual gun juggling affair (you know: hero gets gun from villain, hero looks away, villain gets gun, stand-off continues, yawn) and after shooting Carter, she rushes to set off her atomic bomb and be dispatched by being shoved over a railing by a middle-aged housewife. As a character, I really felt sorry for her.

But I suppose there's no reason to suspect she's being singled out, for it's equal opportunity stupidity here. Not only is Haydock rather an oaf, but Carter's plan to thwart Mrs. Sprot is also depressingly half-baked: while he's easily my favorite character (James Fleet plays him with an endearing, Marcus-Brody-like abstraction), he does deserve a bit of grief for putting the fate of thousands into Tommy Beresford's incapable hands, and not - I dunno - calling in the military, MI-5, or Her Majesty's Navy to help out. 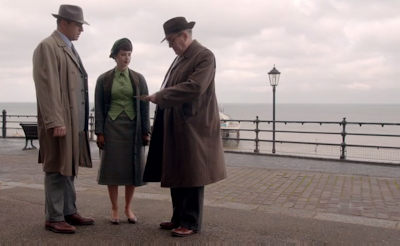 Well, that was depressing. Am I being overly critical? Perhaps a bit, but when there are plot holes you could drop an atomic bomb through, the dialogue is stale, and the whole endeavor has lost any sense of fun, it's difficult to be forgiving. None of my hopes at the beginning of the series were fulfilled. No pulpy Indiana Jones lightheartedness. The Beresford chemistry remained AWOL. Tuppence gives the most unconvincing "I believe in you" I've ever heard, they have a couple vaguely tender kisses, and Tommy congratulates Tuppence on never doing as she's told (never mind that the most engaging moments between the two were when Tommy discovered his confidence and Tuppence stopped nagging).

I guess the old series must remain the standard. It's a tragedy, because this could have been a splendidly fun show to round out the detection TV Summer. Alas. I'll see you guys when Inspector Lewis rolls around this October, but not before.