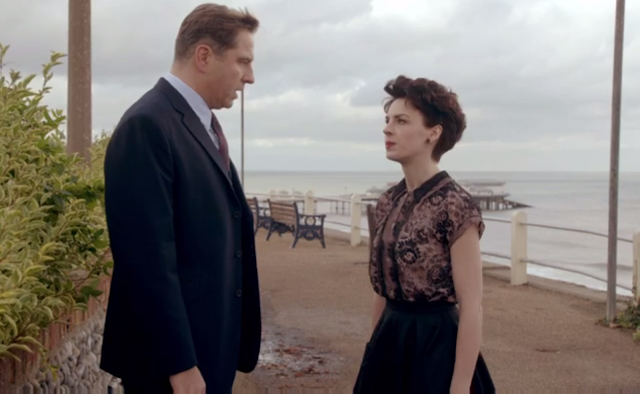 N or M? finds our two heroes on their way to meet with Tommy’s eccentric uncle, spymaster Carter. Supposedly, it’s just to discuss a business investment (Tommy’s abandoned bees and moved on to wigs), but as it turns out, Carter has a mission for Tommy: he has to find a man named Harrison, take note of what he says, and convey that information to Carter. Carter is being watched, so the only person he can trust is, as he says, “a nobody.”

And there’s no one more nobody-ish in spy circles than the ordinary man who saved the American secretary of state from an evil communist plot! 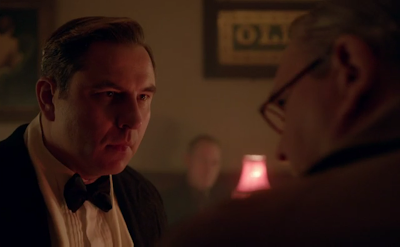 Tommy meets Harrison at the opera, and attempts to take down the man’s message, only to be interrupted when Harrison promptly keels over from an apparent heart attack. But this is Agatha Christie—nobody dies from a heart attack. And so it proves, for Albert quickly discovers cyanide in residue from the dead man’s drink. When all attempts to contact Carter fail, the Beresfords resort to their own devices, discovering that Harrison the heart attack guy was given the wrong seat, and the real Harrison is probably Harrison the hunky tall mysterious guy that Tuppence noticed when she came in.

Nicking the real Harrison’s umbrella from the opera lost-and-found, the Beresfords manage to identify Harrison’s go-between (and gay lover—a tragic loss to womankind, Tuppence notes). After Tuppence is nearly killed (by an extraordinarily incompetent assassin), Tommy decides their involvement must end. It's notable that, since last episode's adventuring, Tommy has become more authoritative, and generally speaking, the Beresfords are on better terms.

Admittedly, the best way to improve their relationship is not to have them bickering every second, and then give one a secret he can’t tell the other, but Tuppence's scrape tends to draw them closer together, and Tommy's caution is endearing. Not, of course, that it lasts long, because soon enough they're off to meet with Harrison, who is promptly killed before them, not before croaking the name of a mole in the organization...but was it N or M?

Regardless, Tommy's soon sent off to be a spy at a seaside hotel. Tuppence, who's once again been shut out of investigations, comes along of her own accord. A number of very Christie-esque characters are introduced: the bad boy, the pretty blonde, the major, and hey! Roy Marsden of Dalgliesh fame. While Tommy nearly blows his cover by being lucky at cards and not so lucky at identifying birds, Tuppence breaks into the major's room (receiving mail from the USSR has moved him to the spot of suspect number one), is promptly caught, and there's this week's cliffhanger.

Generally speaking, this is a more promising start - we have plenty of character actors to distract while the Beresfords do their thing, and an intriguing plot which promises some twists and turns. It's not perfect, but it'll do.