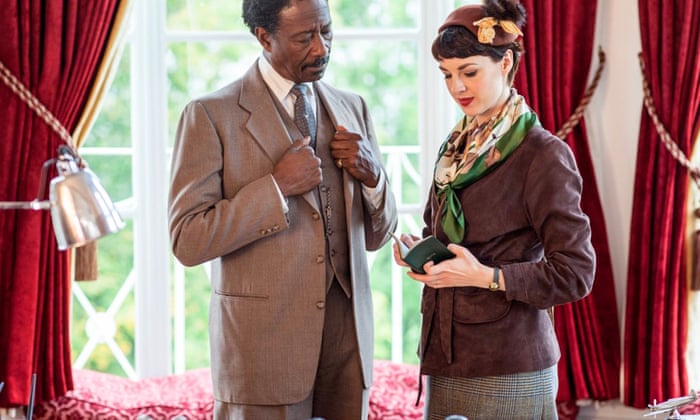 My review of the previous episode

The world's most inefficient spy couple return! Last week left both Tommy and Tuppence in a dicey situation - Tuppence on the verge of being recognized by an evil man (with an evil birthmark!), Tommy cornered in a sleazy house in Soho by another evil man (sans birthmark). Both cliffhangers quickly resolve - Tuppence slips back to her typing job and Tommy not so much slips as stumbles crashing into the false identity of "Drennan," a rich conspirator happily unknown to the others except by name. 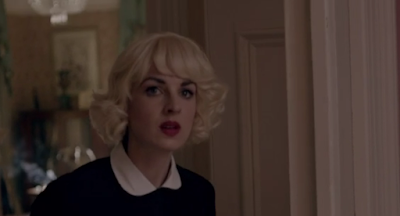 Tuppence figures out that Rita is, indeed, working with Brown towards some overarching, nefarious purpose. We already knew someone would be assassinated: could it be the American Secretary of State, arriving to sign a treaty? Once she leaves work, Tuppence hypothesizes with Uncle Carter and her new friend James Peel (also investigating Rita, and with suspiciously little reason to exist) on this development.

Meanwhile, Tommy's secret is found out by two others - a gangster and a prostitute. The first demands cash for silence, while the second turns out to be the one who answered the Beresfords' ad in the first place (why, then, does she mistake Tommy for Drennan?). Tommy plays for time with his blackmailer, while the girl informs him that Jane Finn is being held downstairs. At last, Tommy's time runs out, but sheer luck (he really is frightfully inefficient) saves him, and ends with his blackmailer gruesomely offed onscreen.

After a heart-to-heart with Tuppence, this spurs Tommy to defy his uncle's orders and head back into danger. "Leave it to the professionals," moans the long-suffering Carter (who's quickly becoming my favorite character). The Beresfords - who, have, it turns out, been learning - drug the real Drennan, but are unsuccessful stealing his money, which means it's back to the suave Julius Hersheimmer, much to Tommy's dismay. 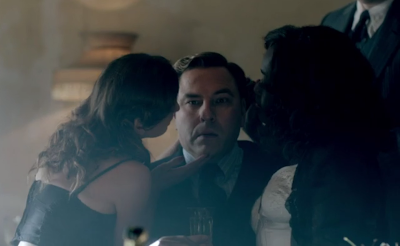 When Tommy finds that Jane Finn has been moved, he also manages to blow his cover and be captured by a man with rather less of a "heavy build" than he has. Really, Tommy - should have paid attention during sixth grade self-defense class. Tuppence, too, is caught by a poker-wielding Mrs. Vandemeyer (c'mon Tuppence, it's not exactly a Glock 17), and confined to her room, where she quickly escapes via the drainpipe (sloppy, these terrorist masterminds.)

Tommy's execution is averted just in time for the end of the episode, but it looks like Brown will use little George (who was bundled off last episode, in order for his parents to have adventures) to buy Tommy's allegiance, whatever good it may do him.

So where have we come? Not far from where we started - this episode suffers the fate of the dreaded middle installment - it exists mainly so time can pass. We don't see many new locations or characters, and the pieces are only slightly realigned after events have passed. But the series still has its charms - if it's knocked a bit off-balance by some too-grim scenes, it still let's Tuppence pick locks and shimmy down the outside of buildings and it's all very preposterously fun. Hopefully, next week will find the (still not quite) dynamic duo reunited and working on that chemistry thing.