It’s a study in personality to see how the respective members of my family react to History Channel’s The Bible. Granny’s commentary about the show was interspersed with news about the neighbors and thoughts concerning the latest season of Downton Abbey. Baby, Granny’s red dog, sat and glared at us with You’re On My Couch writ large on his face. My mom and brother are the nitpickers, though Mom’s complaints make a lot more sense than Sam’s usual, “Hannah. Hannah. Herod wasn’t that fat, was he?” Mom’s question – “I can’t believe they didn’t show Nebuchadnezzar’s redemption” – made a lot more sense. 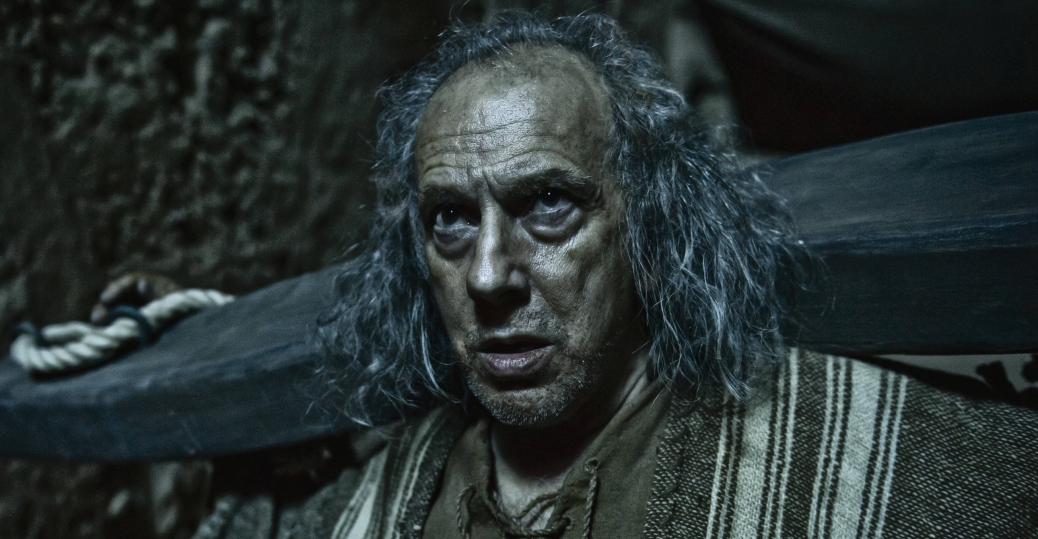 For myself, I think that The Bible has been improving in each episode—it feels like it has hit its stride. By now, the pattern of small story, medium story, and primary story has been set. First here was Noah-Abraham-Moses, then Joshua-Samson-David, and for the third episode: Zedekiah-Daniel-Nativity. We start in the kingdom of Judah—Zedekiah, the last of the old kings, has rebelled against Babylon, and judgment is about to descend. Jeremiah (Raad Rawi) has succeeded his predecessor, Isaiah, “the thundering prophet.”


Among biblical critics, Jeremiah is known as “the weeping prophet,” but The Bible’s interpretation of the man is quite different. This Jeremiah is wild-haired, wide-eyed, and slightly mad. His ranting almost makes one sympathize with cool, arrogant Zedekiah. It’s not very difficult to believe that he’d shy away from surrender to the savage Babylonians. But while we’re talking about savages, the Israelites themselves aren’t exactly Mary Sue’s. Finally, they’re cast into a rather unsympathetic light, resorting to cannibalism during the long siege. Still, it doesn’t feel like the people have done much to deserve the Babylonian oppression, which they certainly had, committing any number of sins.

Next up is Daniel, played by Jake Canuso. His story nicely melds with the earlier tale of Zedekiah, as he is captured during the takeover. Unlike the unfortunate Zedekiah, however, he and his three friends Shadrach, Meshach, and Abednego, are taken to Babylon and sent through Berkeley—sorry, Babylon U., whereupon they join Nebuchadnezzar’s cabinet. Daniel himself, a muscular guy with crimped hair, is a bit on the wishy-washy side. This is the only plausible way to get him out of the fiery furnace episode unscathed. He is playing his cards close to his chest, but his friends, who are led by an Amish-bearded dude named Azariah (a.k.a. Abednego) outright refuse to worship the king. They recite psalms as they are tied to the stakes, which works much more smoothly than with David, and adds a nice element of Jewish flair.


After this, they take the time to portray Nebuchadnezzar’s madness, but skip the whole redemption thing. That’s really too bad, because the whole purpose of the Jewish people being the “Chosen” was to evangelize the world, and this was a key example of this. After this, Brother Nebby becomes a powerful non-Israelite force for good. I’m not urging paranoid political correctness, but the uniform simplistic badness of the Philistines and Babylonians is wearing and inaccurate.


Then Babylon is conquered by Emperor Cyrus (Gerald Kyd), who has been combined with King Darius for simplicity’s sake. Daniel finally gets a backbone in time to refuse to (wait for it) worship the king. While his slightly cowardly tendencies are unrealistic in an intensely competitive ancient court, they do turn to the advantage of the story when he’s thrown in with the lions. He’s truly terrified, and the suspense is dragged out to maximum effect. When Cyrus opens the door in the morning, a calmly dramatic Daniel stands, ostensibly meditating, among the massive beasts.

Skip ahead to just B.C. and the primary story begins. There’s some time spent setting the scene, and the focus shifts to Mary and Joseph. To my thorough approval, they look like teenagers—ordinary teenagers. I could easily see Joseph with braces. His sweet crush on Mary feels authentic, and she feels much more vulnerable and young than other Holy Mothers I have seen. They steal a page from The Nativity Story’s book by having Joseph rescue her from men about to stone her. (To nitpick—there’s no way they’d have stoned her with an unborn baby in her womb - it was against the Law.)


The nativity in Bethlehem is suitably chaotic, and feels a little less Hallmark Christmas Card than most, despite a deplorable lack of dirt and blood. The slaughter of the innocents is brutal and graphic—as is the portrayal of crucified Jews by the roadside. There is a poignant, foreshadowing scene where young Jesus stares, silently, at the dead men.


Time passes, and Jesus grows into Portuguese hunk Diogo Morgado. (Alas, it’s unlikely there’ll ever be a non-Hollywood Jesus). My criticism shot into high gear. To be fair, most Jesuses have a really hard time fulfilling my expectations. I mean, come on, you’re playing God, here.

I was worried, for a while there, that Morgado’s constant expression would be one of squinting in the sun, seeming always on the verge of tears (which would, at least, be better than some of the ethereal Jesuses). But as he ventured into the wilderness, and became a fully human, weak figure, his strength and discipline shone through. His dialogue with Emperor Palpatine/Satan was intercut (very effectively) with contrasting images: those of the opulent kingdom the devil promised, and those of the suffering and brutality of the cross.


Jesus then travels to the Sea of Galilee and meets Peter. Their exchange is refreshingly human, and packed with jam-packed with situational irony. When Jesus wades out into the water, Peter tells him “You can’t just get in my boat!” Jesus, he who will later walk on water, replies, with a smirk, “Yeah. You’re right. Help me up?”


All the same, the final call on that will be next week, when we get into the meat of Jesus’ ministry. Morgado has shown the fully human Jesus, but can he show that of a man fully God?


“There are the kind of thoughts which in combination create the impression that Christianity is something weak and diseased. First, for instance, that Jesus was a gentle creature, sheepish and unworldly, a mere ineffectual appeal to the world….[But in the New Testament] I found an account, not in the least of a person with his hair parted in the middle or his hands clasped in appeal, but of an extraordinary being with lips of thunder and acts of lurid decision, flinging down tables, casting out devils, passing from the wild secrecy of the wind from mountain isolation to a sort of dreadful demagogy; a being who often acted like an angry god—and always like a god.”
-G.K. Chesterton, Orthodoxy

Till next week,
Longish
Posted by Hannah Long at 6:38 PM