Unfortunately, Morgado’s Jesus is a sort of mild-mannered, good-looking surfer dude. It’s not uncommon. I haven’t seen many portrayals of Jesus (not even Passion of the Christ), but even in your usual brightly-colored Sunday School brochures, Jesus is really, really meek. It’s an image that modern Americans are very comfortable with, but that isn’t very accurate. “Our glamorized representations of Jesus say more about us than about him,” Philip Yancey writes in The Jesus I Never Knew. 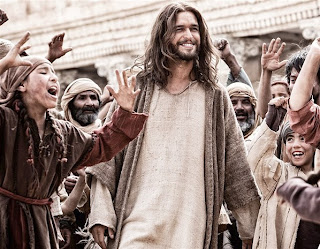 Jesus’ relaxed meeting with Peter in last week’s installment gave me some hope, but the start of episode 4 quickly cranked the drama. Jesus was put in a square surrounded by adoring crowds with sympathetic lighting and camera angles and plenty of scowling Pharisees. This immediately breaks my first rule, by dramatizing and adding soaring epic music (sorry, Hans, I normally like it). Jesus is very otherworldly, and I can only imagine what atheists thought when watching his almost feminine habit of touching people’s faces and hugging everybody and when arguing with a person, taking their hand. Kinda creepy. I mean, there’s room for tenderness, but going any farther than an occasional Frodo-and-Sam embrace is Not Cool.

While Jesus’ ministry is exploding in Galilee (which is known for its rebels, as the show points out), the Pharisees are worried. I really did appreciate the way the Pharisees are portrayed. Excepting Saul, all the show’s previous villains have been Disney bad guys, with no good traits, nothing to humanize them. By contrast, the Pharisees, led by eternally stressed High Priest Caiaphas (Adrian Schiller), seem like pretty decent guys trying to save the Jewish nation, which is surely how they saw themselves. The show describes leaders who are “loved” by the people, men devoted to God’s law and the preservation of Israel. Surrounded by the merciless brutality of Roman rule, the Pharisees play a dangerous political game.Their desire to squash any rebellions is fueled by the fear that Pilate will punish the entire people for the actions of a minority.


“You know nothing at all. Nor do you understand that it is better for you that one man should die for the people, not that the whole nation should perish.” (Caiaphas, in John 11:49-50, ESV)


Caiaphas’s reasoning and pragmatism make him a sympathetic character, even though he obviously never takes seriously the idea that Jesus might really be the Messiah. He said, approximately, “A true Messiah would strive to unite, not divide Israel.” Gotta admit, it makes a lot of sense, while Jesus’ declaration in Matt. 10:34-36 (which didn’t make it on screen, alas) that he comes bringing “not peace, but a sword…to set a man against his father….And a person’s enemies will be those of his own household…” seems crazy. The addition of Nicodemus as a primary character lends even more sympathy to the seemingly rational Pharisees. 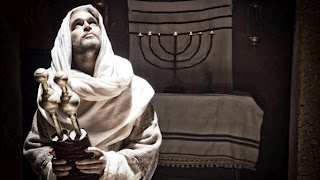 But to get back to the protagonist, Jesus’ speeches never seem suitably irrational. Maybe it’s just because I grew up on Michael Card songs like God’s Own Fool, but the real Jesus seemed to me like a radical, somebody turning every natural impulse and idea on its head. He came to bring division, war, and strife, but ordered his followers to turn the other cheek, love your enemies, and eschew materialism. He was from nowhere, had no education, and had a bunch of  slow-on-the-uptake blue-collar workers for companions, but has had more effect on history than any urbane intellectual who pals around with the cast of Who’s Who. He said the weak are strong, the poor are rich, suffering is a blessing, and the last will be first. If Jesus was anything, he was a revolutionary, not a suave hippy who was nice to everybody. Jesus was a living paradox, just as Christianity is built on beautiful, seemingly contradictory ideals that have changed the world forever. The Bible's Jesus wouldn't change the world - he'd be hard-put to change the neighborhood.


For what it’s worth, Morgado plays his part well—the fault is with the writing. I know I shouldn’t expect them to conform to my perfect scenario (because my mental picture is undoubtedly flawed as well), but it’d be nice to just see something different from the norm, just a little artistic bravery. Yet, as we’ve seen in earlier episodes, there isn’t much in the way of imagination, and it hasn’t started here. Again, however, there are some good things about that. It means there’s no ridiculous affair between Jesus and Mary Magdalene, at the least. The bad guys are still the bad guys. Jesus’ words, in general, remain Canonical. Aside from the occasional fact slightly altered for drama’s sake, and the background subplots drawn from historical sources, the details are the same, if the atmosphere is not.

Jesus’ absolute ransacking of the temple was another disappointment. If a guy can overturn tables gently, he managed it, and there was no hint of a whip or tough love. He ends up holding the hand of the Pharisee he’s rebuking. N.D. Wilson says Jesus stepped hard on the toes of the self-righteous, but was generous to the sinners – and while the temple scene failed to fulfill the first half of that description, the parable of the Pharisee and the tax-collector fair pulsed with Grace. It was made even more relevant by the presence of Matthew, a dishonest tax-collector, whose repentant reaction really makes the scene.


Unlike the earlier too-ambitious epic sequences of the parting of the Red Sea and the walls of Jericho, the special effects are very good, particularly the healing of the leper. The sheer simplicity of holding a basket up to the sun and lowering it full of fish is somehow very effective and non-glamorous. Speaking of the disciples, Peter gives a stand-out performance, though a little lacking in that awkward tendency to stick his foot in his mouth (which is why I sympathize with him).

Thomas and John provide good supporting performances, though most of the disciples seem to understand Jesus’ mission much more than the original dumb sidekicks in the Gospels.
The tension in Jerusalem builds steadily, with Caiaphas declining into desperation as Pilate threatens to shut down Passover, Nicodemus searching for answers, and Jesus causing a whole lot of grief for the authorities. The last few scenes tied together all the plots to culminate with the arrest on the Mount of Olives. I was happy with Jesus’ trial—it would be expected to make the Law the bad guy, but it’s made obvious that Caiaphas is being a hypocrite, breaking the Law to “save” it. Jesus’ declaration “I am” confirming his deity was done well, though they didn’t make the most of it. Jesus is tried and condemned by a kangaroo court, while Judas and Peter wait outside on tenterhooks.
﻿

Overall, I recognize the difficulty of portraying Jesus in a way likely to appeal, but part of the unique thing about him—actually, the most unique thing—is that he had many unappealing aspects. Truth often does. Portraying him as a tender, constantly-on-the-point-of-tears guru with a shawl and great hair is more than just politically correct, it’s inaccurate.


That said—many of the supporting actors were quite good. Jesus had his moments—one with a little girl, in particular. I’m really looking forward to Peter’s segments in episode 5. It’s still orthodox in the details, if not the spirit.