Those of you who've seen it know that in the last episode, Sherlock supposedly died by jumping from the roof of St. Bart's Hospital. Of course, you also know that he didn't. To start with my favorite theory:

This seems pretty nifty. The only other things I would mention are:

1. Was it Sherlock on the ground? - Possibly. If it was a real non-recent cadaver, it would be very cold - if it was Sherlock, it would be warm, and thus realistic. Watson would've known the difference. As for the pulse, the best idea I've heard is that Sherlock held a rubber ball under his arm (as Houdini did) to cut off his pulse. If you'll remember, at one point in the episode, he was playing with a ball. Another possibility is that he took something that made him appear dead, a la Romeo and Juliet, which could also explain the out-of-character tears during the phone call. Or keeping the theory of the ball, he could have been forcing himself to hyperventilate to help with holding his breath. Or the body could've been Moriarty with a mask...which is a bit of a stretch.

2. Who helped Sherlock? - Molly, obviously, but how much she did is uncertain. I suspect she provided some costumes for the homeless network. Mycroft also could've helped, as he did in the book. 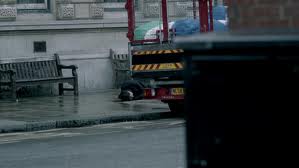 3. Where did Sherlock land? - There's no way he could land in the truck. Judging by his trajectory, he would've landed in the chalked out area alongside (which really exists, and wasn't put there for the show.) Another video suggested that a mattress or some other device was extended from the side of the truck, then pushed back in while John was out of the game. If this was so, Sherlock would've needed Mycroft to provide such gadgets. 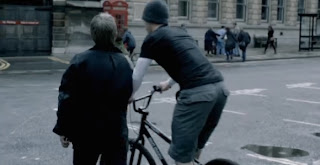 4. What's up with the biker? - Like in the video, obviously Watson wasn't supposed to get there quickly - but I also think he could've been injected with some of the fear serum from Baskerville. Sherlock did have a habit of pinching things for later convenience - Mycroft's ID, Lestrade's badge. 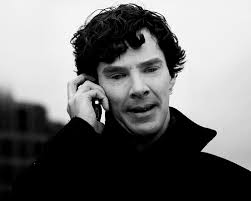 5. What did Mark Gatiss mean when he said Sherlock did something uncharacteristic which was a clue? - First possibility: not being upset when Mrs. Hudson was "shot." But it was in character if he arranged the call. Second possibility: crying while talking to John. But acting was totally in character - and since he arranged it all, of course he was acting. Also, see earlier reference to Juliet pill. Third possibility: when he told Moriarty "I don't have to die - if I've got you." He sang the last four words. Don't know what that means - but it's definitely uncharacteristic. (On the other hand, according to the internet, the lyrics are from a song called Parachute, by Cheryl Cole - which might just be a joke on the part of the writers. Or this.) Fourth possibility - clutching at his mouth in panic. This would tie in with the hyperventilation theory - see above.

Most additional ideas come from this video: http://www.youtube.com/watch?v=J0Hu2BSHiAg

And that's more than enough of that. 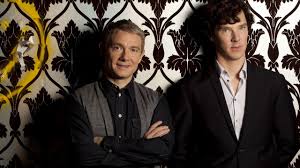 NOW. On to Season Three. One of the writers gave us these clues as to which stories would be adapted: "Rat. Wedding. Bow."

Story 1: Obviously, they're using part of The Adventure of the Empty House, since it's the original Return story. The writers have confirmed this. But I suspect the other story to be used will be The Boscombe Valley Mystery. It could be the Giant Rat of Sumatra referenced in a story, but I doubt it. EDIT: It's now been confirmed that the title will be The Empty Hearse.

Story 2: I suspect wedding is not Watson's wedding. Just seems like a very weird and unprecedented move. Especially with the whole gay gag they keep using. The other possibility is The Noble Bachelor story, which I guess is correct.
EDIT: Confirmed as The Sign of Three, also confirmed that Watson weds Amanda Abbington.

Story 3: I initially thought this might be His Last Bow, the last Holmes story, which would mean they were wrapping up the series. Turns out this isn't so, however, as Cumberbatch has confirmed a fourth season. While they still might use this storyline, this means it's a bit less likely. Instead, what about a violin bow? Or the bow of a ship? The Adventure of the Gloria Scott? I don't know. I might update this when I've come up with something else, but I don't have the time today.
EDIT: Confirmed as His Last Vow.

So those are my guesses. Feel free to ridicule me when I'm proved wrong.