I Liked White Better – or: Saruman and Social Darwinism - Part 1


“‘For I am Saruman, the Wise, Saruman Ring-maker, Saruman of Many Colours!’
“I looked then and saw that his robes, which had seemed white, were not so, but were woven of all colours, and if he moved they shimmered and changed hue so that the eye was bewildered.
“ ‘I liked white better,’ I said.

“ ‘White!’ he sneered. ‘It serves as a beginning. White cloth may be dyed. The white page can be overwritten; and the white light can be broken.’
“ ‘In which case it is no longer white,’ said ‘And he that breaks a thing to find out what it is has left the path of wisdom.’”
"Book 2, Chapter 2: The Council of Elrond" The Fellowship of the Ring 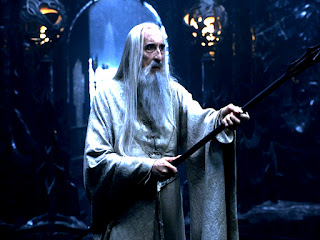 For many years, The Lord of the Rings has been my favorite book. Sir Peter Jackson’s film adaptation has, for nearly as long, been my movie of choice. In so many ways, the films perfectly capture the tone and story of the books, but, still, as requirements of the medium, a good chunk of the original had to be sacrificed.  Most of the changes are understandable. Tom Bombadil’s absence, for example, can obviously be attributed to the sheer difficulty of a faithful portrayal.

But there are things I miss, and chief among them (closely followed by a non-goofy Mouth of Sauron scene) is a brief snippet of conversation between Gandalf and Saruman deep in the stony bowels of Orthanc. It is in this scene that Saruman (pun intended) shows his true colors. Unlike in PJ’s adaptations, Saruman did not stay “the White” for long. Instead, he seeks to improve on the original design, making himself  “Saruman of Many Colours."

Reading through Fellowship again, it’s the first time that the pure arrogance of Saruman has struck me so strongly. His attitude toward Gandalf is conceited to the point of cliché. Saruman obviously despises the wizard, primarily for his humility and incorruptibility. Though he never uses the term “narrow-minded,” it’s obviously hovering on the tip of his forked tongue. Revisiting the character, the words “Social Darwinist” kept rolling by in neon colors (hih hih, colors, get it, colors?).


Again and again, Tolkien casts the bad guys (Morgoth, Sauron, etc.) as arrogant and ungrateful leaders, desiring to set themselves up as God, instead of admitting that he gave them what paltry power they have. Saruman is a poster wizard for rebelling against gratitude. He openly asserts that he has found a better way than he was given in the beginning, eschewing white in favor of flashy style.


He evinces everything I dislike about intelligentsia, the [insert prestigious college]-educated (though don’t get me wrong, there are exceptions!). He thinks that because people are simple, they’re stupid (see “Radagast the Simple! Radagast the Fool!”); Saruman is certain that he, as one of the “Wise”, has powers of discernment not permitted mortal folk. He’s elitist, arrogant, domineering, and a Nietzsche fan.

"'But we must have power, [Saruman said,] power to order all things as we will, for that good which only the Wise can see.'"


“'We may join with that Power. It would be wise, Gandalf. There is hope that way. Its victory is at hand; and there will be rich reward for those that aided it. As the power grows, its proved friends will also grow; and the Wise, such as you and I, may with patience come at last to direct its courses, to control it. We can bide our time, we can keep our thoughts in our hearts, deploring maybe evils done by the way, but approving the high and ultimate purpose: Knowledge, Rule, Order; all the things that we have so far striven in vain to accomplish, hindered rather than helped by our weak or idle friends. There need not be, there would not be, any real change in our designs, only in our means.'”
"Book 2, Chapter 2: Many Meetings" The Fellowship of the Ring

This is one the most dangerous, and most reasonable speeches I’ve ever heard. Saruman’s eloquent and slick packaging makes it all seem humane and logical. But the essential flaw in his argument is that when we begin to despise and elevate ourselves above the marginalized and weak folk of this world, we have reached the deepest levels of depravity.


And what’s worse is, people like that are often so deluded as to consider themselves merciful and humanitarian.

Saruman is convinced of his own wisdom, a Pharisee and a self-righteous bigot. He (along with the Nazis) espouses the Nietzschean argument that the Super-man, the Higher man, top of the evolutionary chain, must always be preferred to the less-evolved creatures often called “simple” (or more popularly in recent times: “conservatives”). He considers death of innocents “collateral damage,” and says it’s all worth it for the pursuit of higher “Knowledge, Rule, Order.” Consider the slaughter of over 50 million children on the altar of convenience in our own country – and yet most of its supporters consider themselves members of that select group: the Wise.