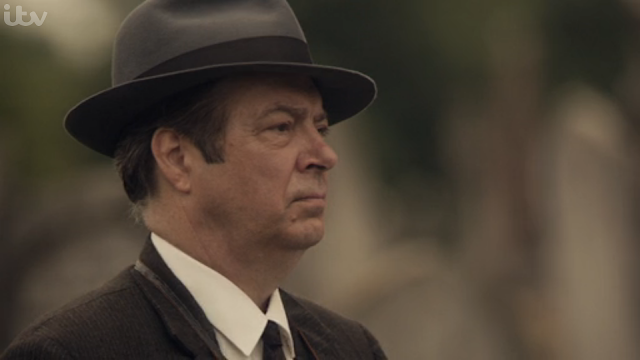 After last week's hijinks, Coda returns to more familiar territory. In many ways, this has been a wildly different series of Endeavour - so much so that it's been difficult to establish a status quo. Coda suffers from this, but in all the chaos, there are moments of pathos.

The story begins with the death of Harry Rose - you might be forgiven for forgetting him - Bixby's gangster pal back in Ride, and the only prominent baddie in a landscape free of Vic Tyler (Home) and Clive Deare (Neverland). The first scene of Coda is almost identical to the opening of the Inspector Morse episode Promised Land (same location, similar characters - the parallel is deliberate). Harry is put to rest as his mourners are observed by two policemen: Strange and Thursday. Who will fill the vacuum of power? Could it be thuggish scrap metal dealers Cole and Peter Matthews, and their stooge, Tommy Thompson? Or what about Larry Nelson, a lawyer? Peter Matthews's wife certainly seems upset: she disrupts the funeral by punching the widow. 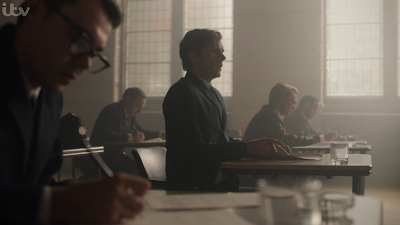 Trouble is brewing, and Thursday knows it. He's living close to the edge - a bullet rattling about in his lung, too close to the heart to remove by surgery. Nothing and everything matters. He beats details out of informant Bernie Waters, realizing too late that Morse has seen him do it. Morse is at a crossroads - he's just taken his sergeant's exam, and as Max points out, Thursday can't have two sergeants - a parting is inevitable. With this breach in loyalty hanging, guiltily, in the back of his mind, he takes Thursday to task. How can he take the law into his own hands? It goes against everything he upholds. Thursday scoffs, and the two part on bad terms.

At this point, of course, there has to be a murder, and there is. Cedric Clissold is found, shot dead, in his car - but the motive, it seems, is not simple robbery. Money was taken, but the body was searched. The killer was looking for something. Could it be - Morse and Trewlove wonder - the films in the trunk of the car?

Immediately after his argument with Thursday, Morse runs into an old mentor, Felix Lorimer. While Lorimer is content at first to merely reminisce, it quickly becomes apparent that there's more on his mind: namely, his imminent divorce. Playing off Morse's guilt and nostalgia, he convinces him to investigate his wife's new beau, Paul Marlock. Reluctantly, Morse agrees - once he sees Nina Lorimer, less reluctantly. The two hit it off, and Morse enlists Trewlove to further investigate Marlock, who is a bingo caller. Sure enough, he's a sleazy character - "eminently resistible," as Trewlove describes him. (She's growing on me a bit, but Dakota Blue Richards doesn't convey enough depth in her line readings to really intrigue me.) 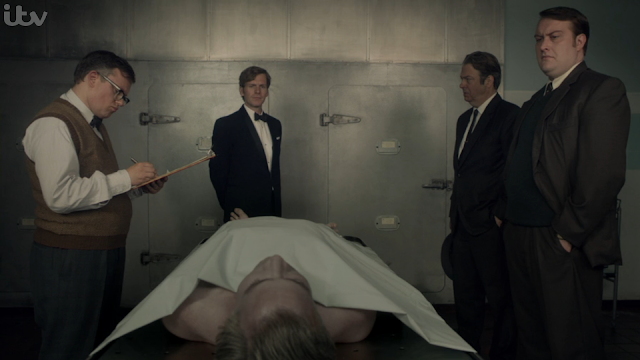 Their investigation leads to a new spin on the case: maybe Felix wasn't quite as innocent as he appears. His wife is convinced he killed Clissold, who had pressured her into starring in a porn film when she was young. Morse, a sucker for a damsel in distress, is immediately sympathetic to her sob story, but he retains some doubts, going to Felix, who provides an alibi. Not that his reputation is pristine - as he leaves Lonsdale, Morse runs into Jerome Hogg (a character from the Morse episode Greeks Bearing Gifts, here played by Kevin Trainor, an entertaining character actor who's popped up everywhere from John Adams to Vera to Sherlock). Hogg is quick to push gossip upon Morse: it seems that Felix may be fiddling around with grades.

In the meantime, Fred's life is crumbling around his ears. His son, Sam (who's played a larger role this series), has left for the army, to make his own life. Morse is concerned, but refuses to indulge Thursday's anger, resulting in a further breach of friendship. It all comes to a head when Bernie Waters puts in a complaint for harassment - resulting in Thursday's suspension from the force. Things are going downhill fast, and Fred's cough is nearly ever-present. 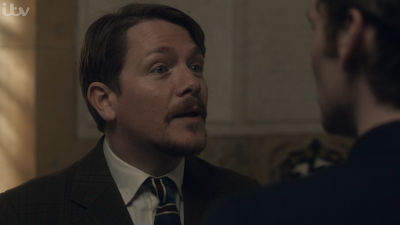 Traditionally, the final episode of each Endeavour season is High-Noon-in-Oxford, and so it is today. Thursday has never been a drawing room detective - his trademarks are not beerstains and crosswords but a fedora and revolver. Yet the world is changing. His brand of vigilante policing - which did not begin with but was exacerbated by his near-death experience - can't survive.

That brings us back to this episode's gangsters. It should be fairly obvious - as the camera keeps returning to it - that their target is Wessex Bank, where Joan Thursday works. Is it too much narrative convenience that Morse, Joan Thursday, Nina Lorimer, and Jerome Hogg all happen to be there when the Matthews brothers burst in? Definitely, but I suppose there wouldn't have been enough time to sort out all the plot details if Morse hadn't had an audience of suspects. Because he's Morse, he spends his time being held hostage trying to crack Clissold's encoded directory of names. The other hostages are by turns helpful and obstructive. Ronnie Gidderton (who Joan mentioned back in Fugue, you'll remember) is jealous of Morse and Joan's obvious trust. Nina Lorimer has her own secrets. Joan's trying to keep her true identity from the Matthews brothers (everybody knows Fred Thursday).

The standoff serves as a character reunion. Dorothea Frazil and Win Thursday stand around looking worried. Max De Bryn, awesomely, wants to rush inside when he hears gunshots. C.S. Bright, awesomely, strides into the open and dialogues with the robbers. Fred Thursday, awesomely but a bit stupidly and pointlessly, calls the bank and threatens Peter Matthews, revealing that he's only got three weeks to live.

Spoiler alert (SERIOUSLY STOP): this is where Fred Thursday's Chuck Norris side shows itself. He literally coughs the bullet out of his lung (I am really wondering about the medical credibility of this plot twist - but maybe Fred's been taking lessons from the Great Zambezi) and then storms a bank with no one but Jim Strange to back him up. He then comes to the moment when he has to choose whether to follow the law or his own sense of justice. 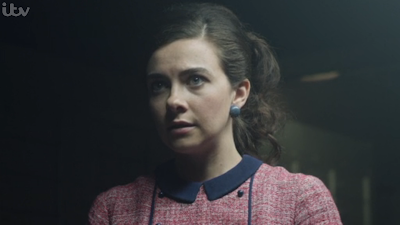 I won't deny the whole thing's quite tense, but it's hard to worry about Morse's safety - his survival is ensured. To shoot Joan would be rather too grim for this show, and once he'd coughed up a bullet, Fred might as well be Superman. Oddly, it didn't hold the dramatic weight - at least for me - that last week's tiger did.

On top of that, the villains were underdeveloped, and acted out a variety of cliched stereotypes (the extended sequence in which it turns out Cole Matthews was just sadistically playing with Morse is both pointless and out of character). The Matthews brothers are drawn from a story Morse told in Promised Land, but even in that, they were no more than names. Here they just feel like knock-off versions of the bank robbers in this year's George Gently finale. It doesn't help that while all this is happening, Mrs. Thursday is smoking and chatting with Dorothea, and Fred's reminiscing to Trewlove about his old guvnor, Sergeant Vimes (wait, what?!), waiting for bureaucrats to move, and threatening the robbers over the phone. Their daughter is literally a hostage.

At last, it's all over. Morse ties up the loose ends. He then has a romantic revelation, which I don't really buy: (spoiler again) he's never exhibited anything more than slightly over-eager brotherly affection for Joan - she seemed to have a bit of a crush on him, but there was no tragic romance. For a show which has fast been losing its subtlety (Sergeant Vimes, I ask you), it's asking a lot for us to infer a great passion from a few vaguely flirtatious moments. But I'll give him this: Shaun Evans plays it for every ounce its worth. If I'd never imagined a happy future with Joan before (ahem, where is poor Monica?), then in that five minutes he imagined it, he convinced me it had always been there.

My review of the next series premiere: Game

Overall, this season has been a bit of an oddball. I'm not quite sure whether it's indulging in fan service, going off into crazy Midsomer land, or simply stretching its legs after a long absence, taking a lot of chances and occasionally doing some mad things just to shake it up. I'd like to think it's the latter, but only time will tell.

Of course, on that score there's ground for hope. This is still a solid show: acting is top notch, production's amazing, character development is for the most part convincing and engaging. Morse is slowly morphing into his older self. If he's unusually pious here (anyone hear echoes of Lewis's Driven to Distraction rebuke of Morse in Morse's rebuke of Thursday?), then there's still a long bitter path to travel before 1987. Thursday facing his own dark side reinvented a character who was becoming a bit too stable. And, of course, Strange is slowly becoming an authority figure (though he struck me as more likely to mimic Bright's legalism than Thursday's anger).

If there were anything I hope for the new season, it's that we abandon the outside references (as Darrell noted last week). Commander Samuel Vimes, the consummate badass copper, is one of my favorite literary characters - but he has no place in the Morseverse. Don't get me wrong, I've long been a champion of fantasy's merits (that it's dismissed as unserious literature annoys me) but the reference was out of place and distracting. Next thing, Fred will be recalling his old uncle Jules, from whom he inherited his pipe. I was completely drawn out of the world.

Longish
Posted by Hannah Long at 1:28 AM