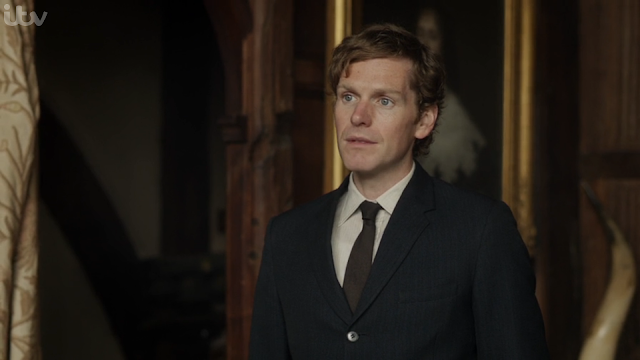 The first Inspector Morse episode aired in 1987. Over the last twenty-nine years, we've seen death in many shapes and forms, from run-of-the-mill stranglings to murder as performance art in a recent Lewis. But don't expect anything like that in Prey: this episode, Morse goes on Safari.

Now, if that sounds like an utterly absurd idea, that's because it is, and it has no damn business working as well as it does.

Things start off when an au pair, Ingrid Hjort, goes missing (a Scandinavian girl near Wytham Woods, no less), reported by her employer - an Ecuadorean named Hector Lorenz. Investigation takes Morse to Crevecoeur Hall, a grand old house which you may remember from the Lewis episode The Dead of Winter. In Lewis, Crevecoeur was owned by the Mortmaigne family, and so here - three maladjusted siblings lounge about the lavish hall, ordering Hathaway around - and wait! That is, indeed, Hathaway, but not James: Philip, father of James (I broke that news a while ago, actually). In addition, there's Geoff Craven, the land agent, and Ingrid's tutor, Mark Bryden, and a couple academics whose names escape me.

At first, it seems like this will be a straightforward serial killer episode. Thursday immediately connects Ingrid's disappearance with that of another girl four years earlier. It's the usual thing: she was left in a coma and Fred Thursday, being Fred Thursday, swore vengeance to the girl's mother.

But as soon as Thursday heads down this trail, Morse and Trewlove (a character who is still just there contributing little but some uninspired banter with Morse) discover a man's severed arm in the river. The incompetent substitute pathologist (Max is off fly-fishing) diagnoses drowning as cause of death and bustles off. Understandably dissatisfied with this explanation, Morse keeps digging, and by chance ends up investigating the disappearance of a bird-watcher who's also tied up in it all.

This is where we start to realize this is not going to wrap up with the usual Christie-esque drawing room confrontation. You see, there's something in the woods, and it's stalking students and children and small dogs. Creepy low shots! Wild woods! Black water! Twisty mazes! Suddenly, characters are quoting Kate Bush and there are references to Jaws and Jurassic Park and (kid you not) Temple of Doom.

Your reaction to all this is probably an unofficial personality test: everyone was quite aware it was all utterly absurd, but is it good-absurd or bad-absurd?

For my money, it was good-absurd. I loved every minute of it. Spoiler here: it really is a beast. The episode plays around briefly with the idea of an elaborate Scooby Doo African cult hoax, but after offering this mad solution, refers us back to the comparably banal escaped-zoo-animal storyline. While the explanation for a real beast's existence could have been offered a bit earlier (Chekhov's tiger?), its existence is not completely implausible, and both Thursday and Morse treat the situation with the appropriate disbelief, until coming face to face with the animal in (why not?) a maze. Let's face it: Endeavour Morse going toe to toe with a tiger is just hilariously fun, if crazy. It's shot with panache, and every single actor gives it everything they've got. It's suspenseful, it's entertaining, it's quite mad. It's great.

There are some things which don't really work, but which are mostly forgotten around the tiger stuff. That the abduction of the girls and the appearance of the tiger were mostly unrelated is a bit difficult to swallow - and as a method of murder, using musk to sic a man-eating tiger on unsuspecting victims is a little slapdash. Not quite cricket, y'know. But who cares? Tigers!

Fred Thursday plays a more prominent role this week - Joan and Win are gone visiting, meaning its just him and Sam and his cough. After a particularly brutal bout, he admits to Morse that there's still a bullet lodged inside him (Iron Man-style), but everything is still Perfectly Okay. It's a constant threat, but the effect on Thursday is less physical than emotional - he morosely chats with his son about life, wonders what his purpose is, and then completely loses his temper, thrashing a suspect into a confession (the consequences for which should probably have been a bit more severe). Complete with a little impromptu tiger taming, Roger Allam's performance has never been better - he's pensive, furious, and bitter by turns. A pleasure to watch, and a thoroughly engrossing storyline. Is this the beginning of the end for Thursday?

Morse's two other long-term co-stars have big moments. Strange has been promoted, taking Jakes's position. Worried that this will harm his relationship with Morse, he tries to paper it over with gifts and cheery good will. Cottoning onto his plan, Morse protests that this is not what friendships are built upon. Alas, Strange is no Lewis - he and Morse cannot truly understand one another, because Strange thinks everything must be bought. Jim Strange, complacent and successful, faces the lanky nonconformist loner Endeavour Morse across a table: it's a snapshot of their entire relationship.

Meanwhile, Chief Superintendent Bright finally has his moment to shine. Anton Lesser as macho tiger slayer? Well, of course he is. Possibly the best thing about W.P.C. Trewlove's presence is how it brings out Bright's paternal side - and combined with tales of his India days and a bit of derring do, we really get to see Anton Lesser's range here. I imagine he can check "shot a tiger" off his acting bucket list now.

You'll notice some new music: Matthew Slater scored Prey. Barrington Pheloung is a wonderful composer, but it's nice to hear something fresh.

Aesthetically, this is a lovely episode. Light spills through dusty rooms and the camera sweeps low across wilderness. I actually gasped out loud at the God's eye shot of Endeavour Morse stalking along five feet from the tiger. Isn't it crazy that this is actually happening? And oddly enough, despite it all, I found that by the end, we'd finally slipped back into something like a status quo, in a way we haven't all season. Which reminds me again that, after two years, this season is almost over. Which is depressing. If there's anything this episode proved it's that one can do lots and lots of things with the Morse formula. Too bad we'll only get to see one more example this year. But there is hope - last year the World Cup interfered with filming. Let's hope there'll be no more of that.

My review of next week's episode: Coda

Longish
Posted by Hannah Long at 12:57 AM