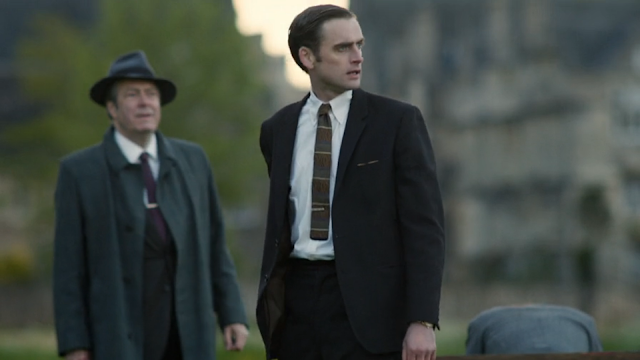 I don't suppose we could have plausibly continued the Morse-as-tourist-in-great-literature trend into the rest of the series, but I'm a little sad that this week doesn't find Morse as the mild-mannered Charles Ryder in Brideshead Revisited (I had my hopes: after all, this episode is called Arcadia) or snobbish Pip in Great Expectations, or any number of other literary middle-class hangers-on observing the enchanting world of the upper classes.

Of course, I kid. Morse in The Great Gatsby was a neat gimmick episode, but not a sustainable conceit. Even so, Morse as a character has always found himself an interloper in the world of others, and never more so than in Arcadia, an overstuffed episode which rather clumsily tries to get back into its usual groove. 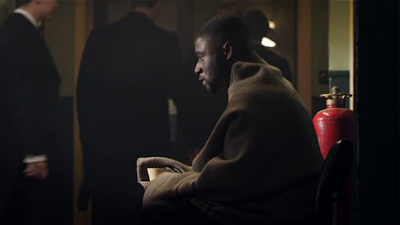 Dropping the conflicts of last week's episode, Morse finds little trouble slipping back into the routine of investigation. He and Strange are called to the apartment of a young student, Simon Hallward - killed in an explosion precipitated, Morse speculates, by a cigarette dropped on flammable art supplies. Meanwhile, a girl drops dead to the pavement in the midst of the racist bullying of a young African student, Cuthbert Mukamba, and a wealthy couple, Leo and Annette Richardson, are arrested for drunk driving.

Joined by Thursday, Morse tracks down Simon Hallward's friends: members of a hippie Quaker commune, in an idyllic location known as House Beautiful (the second locale in the Morseverse to be nicknamed after the house in The Pilgrim's Progress). While the commune is probably the titular Arcadia, the story lingers there only briefly - just long enough to introduce Gideon Finn and Ayesha, whose relationship is basically that of every creepy cult leader and devotee you've ever seen on screen.

From there, the story refocuses on the death of the girl - a casualty Max DeBryn can't quite attribute to the stomach bug going around. Foul Play Is Suspected, and she was tied to Richardson's, a brightly painted store also connected to an incident with glass in a toddler's food.

The store has been under attack: threatening letters, food sabotaged, and a political protest claiming the store buys sugar from Rhodesia (or something - for a plot point so well-staged to be a Theme, it's really underdeveloped). 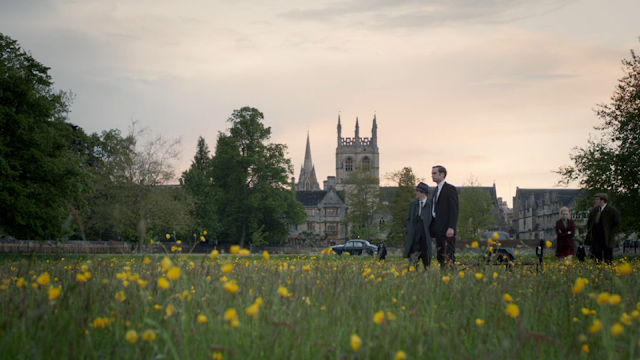 Who are the suspects? Well, besides the protesters (one of whom is Cuthbert Mukamba), Richardson's is managed by Ivor and Prudence Maddox, and their son Mike is a longsuffering employee. They have a plausible grievance against the owners: in a Sins of the Fathers-like twist, their ancestors co-owned the store with the Richardsons, but have now come down in the world.

Speaking of the Richardsons, it is with their troubles that the episode finally settles down to roost. Leo Richardson (Lewis fans might remember arrogant, wheelchair-bound Theodore Platt from Whom the Gods Would Destroy) is a cold-eyed, flinty business mogul, with Evil CEO written over him in huge letters. His wife, Annette, is glamorous and slightly helpless, but when she tries to seduce Morse (Second episode in a row! Shaun Evans is cute, but this is a little ridiculous), becomes mostly creepy. Their daughter Verity resents them for reasons unknown. 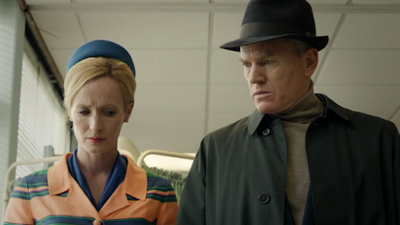 Because Annette is creepy, and Leo and Ivor Maddox throw one another such In Cahoots looks all the time, it's hard to care when Verity is kidnapped. (Besides - spoiler - if you know anything about Evil CEOs and Plucky Activist Daughters, it's quite easy to see through this plot deception.) Morse and co. have to track her down while seeking to tie the main thread to the subplots concerning Simon Hallward, the commune, and Cuthbert Mukamba, because, I suppose, the plot needs it to happen.

Broadly speaking, that's it. Execution is decent: there are several entertaining action sequences (the money transfer and bomb threat, especially), and the production is making good use of the strong colors of Oxford's summer. If a few line deliveries feel clunky (Morse's oddly emphatic philosophical musing about Allwood's mail feels rather less meditative than is warranted), they're made up for by good performances in quiet scenes. While it doesn't make up for a previously mustache-twirly performance, Ivor Maddox's genuine humility was a nice surprise, and his wife's conversation with Morse about his childhood, if somewhat out of place, happily recalls the older Morse's tone on religion (young Morse has been a bit grumpy on that score so far: Thaw's Morse was more lenient and even hopeful.)

It's difficult to appreciate any of this, however, among all the sinister doings. The story is already convoluted and unfocused, with too many characters and too many red herring twists, but on top of all this, Morse is thinking about his mother, getting up to date on what's happened with every single major character in the show, as well as being introduced to a new one. 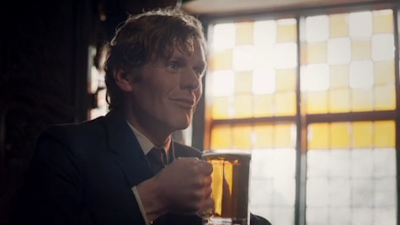 Peter Jakes is engaged and expecting a child, planning to pull up stakes and move to the States. Dorothea Frazil is dating someone and worries Morse looks "uncared for." Jim Strange, Mr. Bright, and Max DeBryn are much the same. Joan, Sam, and Win Thursday all make brief cameos. Monica and Morse meet, but exchange nary an important word (really?!). A new woman PC appears, Shirley Trewlove, and is efficient and attractive, but adds very little to the story beyond hinting at a disappointing sequel to Morse's previous romances (I'm not sensing any chemistry here).

Much of this is rushed or merely touched upon, and the only thing which really works is Peter Jakes' transformation into a soft-hearted domestic man. It's a bit too abrupt, and perhaps the brotherly relationship between he and Morse is emphasized a bit too strongly (up until two episodes ago, they really hated one another), but Jack Laskey is shockingly charming as a happy father. I'm sad to see him go, but it's good to see a happy ending within the usually tragic Morse story.

After the stately pace and spare exposition of Ride, Arcadia is making up for lost time, but at the cost of a return to normality. Ride's shake-up of the status quo has still left us a little unsteady on our feet, and Trewlove replacing Jakes (who has taken his Eve and left Eden, Morse informs us via poetry) will mean even more change is afoot. Can the show regain its steady footing before the finale? I hope so.

My review of next week's episode: Prey

P.S. Forgot to mention: Morse fans may note a cameo from a Masonic Mysteries character, Marion Brooke. She's the girl at AMNOX.
Posted by Hannah Long at 12:03 AM