Neil Gaiman's simply one of the best storytellers in the market right now. Mixing the whimsical and macabre, he uses an uncomplicated story to convey a powerful, understated effect. My dad described his writing thus: "It's like you're walking down an ordinary street and then you take a left turn and there's Faerie." The Graveyard Book is close to my favorite of his novels (Coraline might be the winner), and in it he sets us into a small world with a supernatural twist. Bod is an ordinary boy, raised by ordinary parents, who just happen to be ghosts.

I read My Antonia once before in what was probably Middle School, but I obviously didn't get it. This was the time it finally clicked: the atmosphere, the untamed prairie, the romantic realism of it all. Also, that epilogue was about the most winsome portrait of a huge family that I've ever read.

C.S. Lewis has been one of my favorite writers for most of my life. Surprised by Joy is his autobiography - but it's the journal of a spiritual journey, not a physical one. It's not a scholarly work, but it rings true nevertheless - the concept of sehnsucht, the idea that God reaches to us through our joy - that joy itself is more than mere happiness, but is the longing that underpins our entire lives.

When I read A Tale of Two Cities I gained a whole new appreciation for Charles Dickens as a novelist, and have been solidly working my way through his collected works ever since. I liked A Tale of Two Cities more than David Copperfield, but only by a bit, and the latter is certainly the better written. With a cast of characters as long as your arm, atmosphere by the bucket, and lovely, hilarious purple prose by the page, it's simply marvelous stuff. Best of all is Micawber, the grandiloquent spendthrift, and Betsey Trotwood, Davey's fierce elderly aunt.

The Haunting of Hill House is creepy. I mean, it's not terrifying - but for early horror, this is pretty decent stuff. An evil house - a malevolent presence - bumps in the night. It feels a bit dated - the characters speak a bit like 60s Characters rather than people, but it was a good introduction to Shirley Jackson's works. 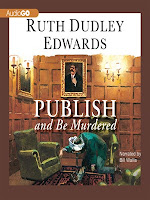 It just ain't a proper list if there isn't one contribution from Ruth Dudley Edwards. She writes hilarious, cutting satire in the form of murder mysteries - in other words, just my brew. This year it's Publish and Be Murdered. Robert Amiss goes undercover at a publishing firm which is being blackmailed. Murder and hilarity ensues.

Devices and Desires is just about a perfect P.D. James novel for three quarters of its length. It then abruptly turns into Agatha Christie. This is quite strange, especially for a writer as elegant and measured as James, but the rest of it is some of her best - I particularly appreciated the idea of nuclear power as a religion, a reactor replaces a church, thereby replacing England's source of spiritual certainty for centuries.

Susanna Clark's Jonathan Strange & Mr. Norrell is a mishmash of Jane Austen, Charles Dickens, and Neil Gaiman. While Clark could improve her pacing - large portions of the book drag - it's a fascinating idea: An alternate England with a magical heritage, reawakening to its own roots in the midst of the Napoleonic wars. And it's told in the language of the period. A 7-part adaptation was one of my favorite TV shows last year.

I was really not on board with Rebecca until two thirds of the way through. A creepy, controlling, mysterious man romances a timid, insecure girl? Not cool. Even worse: he's obsessed with his dead wife, Rebecca, who survives in spirit, her influence permeating the halls of Manderley. That all changes with a surprise twist that utterly blindsided me.

Apparently, I'm on a downhill spiral, since this year's paltry 30 books pales compared to the 53 and 80 of recent years. But here's the list, nonetheless. Last year's list.

Email ThisBlogThis!Share to TwitterShare to FacebookShare to Pinterest
Labels: best of list, David Copperfield, Devices and Desires, Little Women, My Antonia, Publish and Be Murdered, Rebecca, Surprised by Joy, The Graveyard Book, The Haunting of Hill House