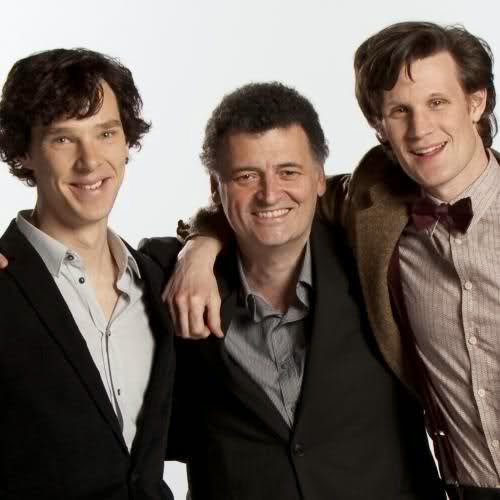 What happened? Halfway through the first episode of season 2, New Earth, I vividly remembered a slightly misquoted Stephen Moffat line a friend had mentioned to me months before. He was speaking of the title characters from his two most famous shows:

“I think Sherlock is more flawed than the Doctor, in that he's chasing a delusion, I suppose. The remark I always make is that the Doctor is like an angel aspiring to be human, and Sherlock is a man aspiring to be a god. Neither of them come close to succeeding in that aim, or ever could. It'd be impossible for them.”

Except the Doctor's not an angel - he's a god. Really. The Moffat quote occurred to me right after a scene in New Earth where an exchange takes place between the Doctor and the villain, who is using humans as guinea pigs for her experiments:

HAME: [T]hink of those Humans out there, healthy and happy, because of us.
DOCTOR: If they live because of this, their lives are worthless!
HAME: But who are you to decide that?
DOCTOR: I'm the Doctor! And if you don't like it, if you want to take it to a higher authority, then there isn't one! It stops with me.

Earlier in the episode, the Doctor was described as "a wanderer...the man without a home. The lonely god." Not exactly subtle. The climax in this particular story comes when he miraculously cures a group of hundreds of humans, cursed with every disease on the planet, and in the process creates "A brand new form of life. New humans!...You can't deny them, because you helped create them. The human race just keeps on going, keeps on changing. Life will out! Ha!" Think about it. He’s not human. He’s just a step above us, relatable but powerful. He's a healer, but he has the power to wipe out entire races. He's spoken of in an abundance of highly religious language, Time Lord Victorious, the great warrior, an angel. Whenever someone just says the word "Doctor," there is a sort of mystical significance to it. His judgments are apocalyptic. Can you think of any other character whose actions are spoken of in the terms of "the fury and kindness of a Time Lord?" Fury? Why not "he is a jealous god?" That's probably up next.

"You've come to help. Praise the Doctor! Praise him."
-"The Unquiet Dead"

I’m hardly the only one that finds this laughably obvious. See here, here, and here. It's not just because I'm a Christian. An atheistic journalist in The Guardian commented on it. Bestselling sci-fi/fantasy author and humanist Terry Pratchett says the Doctor has become...

“an amalgam of Mother Teresa, Jesus Christ (I laughed my socks off during the Titanic episode when two golden angels lifted the Doctor heavenwards) and Tinkerbell….There is nothing he doesn't know, and nothing he can't do. He is now becoming God, given that the position is vacant ... Perhaps they should start transmitting the programme on Sundays."

There’s an excellent comment on this site by a fellow named Edward Hamilton describing the show:

It’s bound by an anti-Prime Directive, where the Doctor feels a moral obligation to completely upend every society he encounters and replace all their old social values with a revolutionary new perspective that (shockingly!) corresponds to the post-Christian elite consensus of western European nations.


If modern man could design a god to fit all his desires, it would be the Doctor. He's politically correct. He is fallible (and therefore not holy). He's an incarnation of popular culture. He's funny, handsome, charismatic, conflicted. He has his flaws, but he isn’t stepping on any toes. He tells us we’re wonderful. He needs us, because he gets lonely. He's a prepackaged messiah.

I quote again from Edward Hamilton:

The newer show is predictably cleaned-up to the point of clinical sterility. The protagonist no longer resembles a relentless and wild-eyed itinerant prophet, but has become more of an emotionally wounded man-child in constant need of some new manic pixie dream girl to disrupt his solipsistic bachelorhood. The old show felt utterly unlike anything else on television, but the new show feels like a Whedonesque stew of modern science fiction tropes that’s somehow been expertly recalibrated to appeal to young single women. I can’t help looking at it with the same lingering regret as a indie-music fan who suffered the indignity of seeing a beloved underground group turn mainstream and become wretchedly popular with throngs of teen girls. 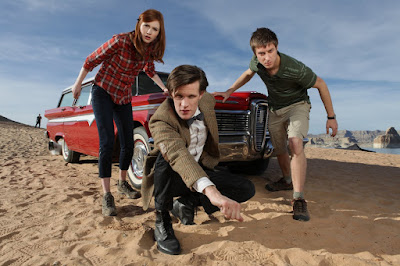 All right, fair enough, but it’s a free country. What am I complaining about? I’m not mounting a campaign to have it pulled from television (idolatry! Break out the pitchforks! I have better ways to spend my weekends), but I do think people ought to think about what they’re watching. That goes for all television. Even if you’re an atheist, you should examine this desire to worship something, especially if it’s your own principles. Talk about giving yourself a pat on the back. At least don't delude yourself into thinking it's about diversity.

Another thing: preachiness is bad art. Propaganda is hardly radical, it’s just lazy. And Doctor Who comes dangerously close to a humanist sermon. Its best moments are when it isn’t trying to teach something, like in Blink or The Empty Child two-parter, which are just terrific stories. Gridlock is another example of a more balanced tale open to many interpretations.

This is where we return to my second conclusion: Contrary to popular belief, Science Fiction is almost the complete opposite of Fantasy. Yes, they both involve fantastical creatures and unearthly settings, but there is a deep ideological divide at the heart of both genres. Fantasy is often accused of supporting reactionary values and a paternalistic, atavistic societal structure. Being set in the past (usually), this is its trademark weakness, to be conservative propaganda. That. Is. A. Bad. Thing.

Science fiction, on the other hand, is set in the future, and its weakness is its tendency to envision a progressive utopia in the stars, where humankind has miraculously shed its faults and become the mythical Superman. The irony about Doctor Who is that while it alleges to teach diversity, all it really tells us is that the rest of the universe agrees with our modern 21st Century mores, and those that don't are unenlightened.

In The Satan Pit, the alien being from whom all legends of the devil have sprung says

“I am the sin, and the fire, and the darkness! I shall never die! The thought of me is forever: in the bleeding hearts of men, in their vanity, obsession, and lust!”

That’s practically the first time we’ve heard humanity could have flaws, much less sin. While there is certainly bigotry, racism, and other frequently referenced Leftie sins, mostly humankind is “Indomitable, that's the word! Indomitable! Ha!” (Utopia, S3ep11) It's notable that it is postulated that "Maybe that's what the devil is, in the end - an idea" which is destroyed at the end of the episode, after, in fact, the Doctor has descended into...well, you know. I believe Rose's expression is, "Go to hell!" That's what we think of sin.

(All the same, in that episode another interesting point is made - that the Doctor is always traveling in order "To be proved wrong," to learn where his knowledge has defects. But, of course, in the end, the Doctor is practically always right on points of morality, so his comments about the fallibility of his "rules" are somewhat irrelevant.) Humanity is really the key here, because this is what the show is about.

"I've seen a lot of this universe. I've seen fake gods and bad gods and demi-gods and would-be gods, and out of all that, out of that whole pantheon, if I believe in one thing, just one thing, I believe in her..."


the Doctor says, of the Everyman stand-in, Rose Tyler. He believes in the indomitableness of humanity, the pursuit of scientific knowledge, and the upholding of his TV audience's secular mindset.

Am I making a mountain of a molehill? Probably. Really, it's not a huge deal to me, but thing is - I know it is to a lot of other people. Our society often culls its values from pop culture, and I don't think we should dismiss something this influential.

I still watch it occasionally. It did make my top picks section in 2013. I'd like to get beyond season 3 at some point, and Matt Smith does seem pretty awesome. It has its merits, among them a devotion to wonder, a value on life, ("Everybody lives, Rose!") and great British supporting actors. But in the end, I can't shake my conviction that the show is a self-centered hymn to humanism, complete with a god made in our own image. It's not quite funny enough to make up for it.