1. Radagast. Thank God, he only has five minutes, and those relatively painless.

2. The Goblin King. His replacement would have to be Stephen Fry, who's somewhat of an improvement. Fry is a typical oafish bureaucrat, railing against the rising tide of progressive revolutionaries led by a surprisingly engaging bargeman named Bard. The politics are rather simplistic, but brief. Probably that will go downhill in installment three.

3. Stupid dwarf humor. Much less of that, but there's much less humor in general.

4. Black magic. Only of a vague sort, and rarely mentioned. Not quite as clumsy as Radagast's mumble over the hedgehog in film one. Instead, it's dark smog vs. light bubble! Sauron is a black cloud when he's not a fiery eye when he's not a kaleidoscope.

5. Boring visuals. One of the great things about Desolation is the frequently changing scenery, jumping from the mountain plains around Beorn's house to the dark claustrophobia of Mirkwood to the graceful Elven caverns to the Pirates of the Caribbean-esque Laketown to the oceans of gold in Erebor. Things move so quickly that there isn't time to get used to any one location, excepting the atmospheric Laketown.

6. Lazy foreshadowing. There's a morgul arrow which is eventually healed by kingsfoil, a weed. There's a dwarf with a crush on an elf. A glowing elf who heals a bloke by speaking Elven words (Arwen, anyone?) Several things of that sort.

7. Action sequences. Sure, these were bigger and badder, but there were only two major ones - the barrel race, which took far too much screen-time and contributed nothing to the film, but was nevertheless quite fun and superior to the never-ending Escape from Goblin-Town sequence. Speaking of never-ending, the movie's conclusion in The Lonely Mountain is a sort of Indiana Jones on steroids, with a Cumberbatch dragon.

8. Not being Lord of the Rings. Let's be honest, I gave up on that a long time ago.

Overall
I hate to say it in the light of all the desolation of Tolkien going on, but I think this movie is better than the first. The pace doesn't drag, though I wish we could have lingered with Beorn and spent time enough experiencing Mirkwood. The only part I started to get fatigued was the last action sequence, which went from massive chamber to massive chamber in Erebor, culminating in a weird gold statue thing, and then ended with a cliffhanger promising more destruction. 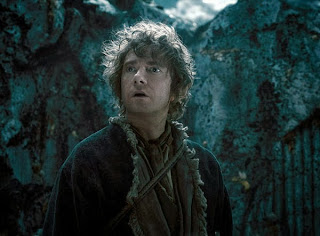 As for characters, they are almost completely sacrificed to the action. Martin Freeman is wonderful in whatever scene he's in, but there are precious few of them. This movie really ought to be called It's a Mad, Mad, Mad, Mad Middle-Earth, not The Hobbit. Really, I think the greatest tragedy about this film is the lack of Bilbo - he's lost in the swirl of CGI and events. Gone is his homely love of the shire, gone is this essential connection to everyday life that LOTR always managed to hang onto.

There are more departures. The one scene in the film that I felt had raw drama to it was when Freeman first truly felt the malign influence of the ring, which would have been magnificent if I hadn't been thinking "This isn't Bilbo - this is totally wrong."

In this film, Bilbo Baggins's trademark cleverness is traded for an unexpected and inappropriate skill in fighting. He doesn't survive by his wits, but by the sword - a true alteration of the book's character. Even the classic verbal sparring with Smaug is overshadowed by the fact that Bilbo is scrambling over gold after the Arkenstone all throughout the complex conversation. Speaking of Smaug, though. Benedict. Cumberbatch. Is. Awesome. While the dragon vs. dwarves climax went on far too long, the first few scenes where Bilbo is realizing the sheer magnitude of Smaug come the closest to real suspense.

Richard Armitage is a solid Thorin, but there's nothing really new from him. Ian McKellan's Gandalf is completely predictable. As for the other dwarves, they're even more indistinguishable in this tale, excepting Kili.

And now we come to Kili. I knew when I saw the dwarves were really mini-men that trouble would come of it. And it has, in the form of a bland love triangle. Yes, it's terrible. Yes, Tauriel is one-dimensional, as is every other elf in this terrible subplot (let's not even get started on Legolas and his bright blue contacts). I enjoyed a few of the sappy lines about stars - they would have been rather cool if it hadn't been dwarf-elf love - but if there was any chemistry it was completely drowned out by the thunder of Tolkien rolling in his grave. Not to mention a certain lewd comment from Kili that made me just hope my younger siblings weren't paying that much attention.

Dol Guldur. As for Gandalf, his role is minimal, and really of little importance. I admit, Sauron's cameo was pretty darn cool, and the scene where he and Gandalf fight was much better than Radagast's mumblings in film 1, but it was firmly in the Gandalf-Saruman fight rip-off realm. And again - the Sauron kaleidoscope.

As for the spiritual element, it's practically nonexistent. In Unexpected Journey we were treated to Gandalf's moral of the story, having his inspirational moment (cue "Breaking of the Fellowship" tune) and saying that humility is more important than ambition, and mercy than vengeance. In Desolation, there's none of that, bar some political mumbo-jumbo in Laketown, and if it ever believed in those sentiments, its enormous action machine, obviously valuing ambition over humility, discredits the effort.

All that said, this movie was fun. It's not The Lord of the Rings. I'd go so far as to say it's not even Middle-Earth, but it's fun. Remember that, young padawans, and you shall do well.