A Tale of Two Cities - Simply a wonderful book. Dickens's wry black humour, melodramatic sentimentality, and complex, suspenseful plotting are delightful. Tale features less sophisticated characters than Our Mutual Friend, (I suspect Lizzie Hexam is a more human version of Lucie Manette, and Eugene Wrayburn of Sydney Carton) but it's still a work of genius. Possibly surpassing Lord of the Rings (which, for me, is monumental.) One of the best conclusions in the history of literature, a picture of true courage in the face of remarkable evil. I wept. My review here.

Charles Dickens - by G.K. Chesterton. Following my sudden resurge of interest in Dickens, I got ahold of this charming little 1906 biography. Popularly credited with spawning a Dickens revival when he'd been mostly forgotten (Kate Perugini, Dickens's daughter, considered it the best biography since Forster's, which had been considered definitive), it's a great piece of writing in its own right. It includes such quotable snippets as “In everybody there is a certain thing that loves babies, that fears death, that likes sunlight—that thing enjoys Dickens” and “We are not, of course, concerned with the kind of people who say that they wish that Dickens was more refined. If those people are ever refined it will be by fire.”  Read it free here.

Brideshead Revisited - A subtle, beautiful, and grim story of disillusionment, sin, and grace. Full of magnificent prose and an array of eccentric flat and round characters, it's a story that climbed inside me and captured my imagination, showing me the death of a British golden age and the slow, interminable work of God's love. As Father Brown observed "I caught him, with an unseen hook and an invisible line which is long enough to let him wander to the ends of the world, and still to bring him back with a twitch upon the thread." My selection of quotes.

Lord of the Flies - Not for the faint of heart, and certainly not for those who have a sentimental view of children. Grisly and deeply symbolic, Lord of the Flies presents evil unflinchingly. One can possibly come out of it thinking it exaggerates depravity, but it has the terrible ring of primary truth. God have mercy.

Peter Pan - If you're looking for Disney, you've come to the wrong place. Barrie's original story presents a much more realistic vision of the eternal child, displaying the pettiness, immaturity and irresponsibility that come along with Peter's Utopian lifestyle, and shows that growing up isn't such a bad thing after all. Unlike Lord of the Flies, it does so in a much more whimsical world, but not to the lack of character development. Hook, and his essentially British obsession with "Good form" was pure joy, so much better than any one-dimensional characterization I've seen on TV.

Les Miserables - Otherwise known as The Brick, the original novel seems less like a story than an institution. Hugo, like Chesterton, tends to wax verbose, but unlike Chesterton, he hasn't the levity to justify it. All the same, some of his tangents were fun. I actually enjoyed the two or three chapters on the history of the Paris sewers, and getting into David McCullough mode made Waterloo much more interesting. Of course, from a story standpoint, it's a fun, suspenseful story, light on character development, but truly building a world that one can step into - I felt I knew post-revolution France much better after reading it. My reviews: Part 1 and Part 2.

Harry Potter and the Deathly Hallows - This was a surprise. I began reading the series early in the summer, determined to be all skeptical and theologically orthodox. I didn't relax my objections in the least, but I did find the Potter much less offensive than I imagined it would be.Yes, magic. But not occult magic, or when it was, it was mostly a joke (the Divination teacher had only ever had one prophecy come true, and she promptly forgot the answer.) I'm not going to fight about that here; I've got a more thorough explanation of my position in the works.

All the same, the series is a mixed bag. Characterization was wonderful, plotting was good, quite a few original ideas. Harry's rebellious tendencies were far too often portrayed as a good thing, as was his disrespect of adults (though Hermione provided a nice counterbalance). All this did come to a satisfactory conclusion, however, in Deathly Hallows, which was my favorite of the books. I can't say much without giving away the story, and I'd never call it perfect (much less inspired), but it had a strong element of grace that I wasn't looking for, and that Rowling obviously intended. Interestingly, she drew inspiration from A Tale of Two Cities and Elizabeth Goudge. 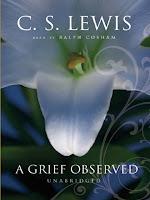 A Grief Observed - C.S. Lewis's diary, kept during his wife's death. Almost embarrassingly personal (originally published under a pseudonym), this is a candid and raw confession of doubt and faith. It's only eighty pages, but I found myself having to lay it down occasionally, shocked by the sadness. However, whatever some may say, Lewis ends on a thoroughly faithful note, despite a complete lack of his usual cheery, somewhat overconfident apologetics tone. As an aside, the original TV version of Shadowlands was much more true to this, I found.

The Children of Men - by P.D. James. Another dystopia, this time set in a world where children have stopped being born. It's an amazingly creative idea, and though it's somewhat lacking in execution, James's characters stand out in a small human drama set in a world that has lost hope, and with it, all allegiance to the abstract. As always, P.D. James's prose shines in its stark, clear elegance. My review here.

The Dean's Watch - I hate to keep using predictable praise, but this is a gem. Nobody's heard of it. I mean, nobody. Elizabeth Goudge is obscurer than obscure (except, apparently, to J.K. Rowling). Why is a mystery. Her writing is full of a riotous joie de vivre (and yes, it's the first time I've used that expression, and probably the last, so enjoy it), and a fascination with the world through the eyes of Christianity. She can find a small piece of grace for even the most unlovely of persons. If Lord of the Flies is depressing, Goudge sends one soaring to the heights of optimism. You can find it on Abebooks. My review here.