For the last seven weeks, Jonathan Strange & Mr. Norrell, otherwise known as the best fantasy series since The Lord of the Rings, has been airing in the United States (read my recaps here). The finale airs tonight, and will (spoiler if you haven't been paying attention) at last reveal the Raven King, John Uskglass, ancient ruler of both England and faerie.

Both the titular characters are inextricably bound to the Raven King, willing or no. Mr. Norrell is a hidebound conservative, and looks down on the Raven King's "unrespectable" magic, but he owes a debt to the earlier magician's efforts. On the other hand, at this point in the series, Norrell's erstwhile pupil Jonathan Strange desires to summon Uskglass in order to employ the sorcerer's power to rescue Arabella Strange.

And who is the Raven King, exactly? The closest literary parallel may be Watership Down's trickster hero El-ahrairah. Both characters loom mythically large, but they are political, not religious, heroes - incarnations of what a country or a people should be, not a soul. They are Robin Hood, or perhaps George Washington (don't tell me he hasn't become a bit mythical), rather than Jesus. This isn't to say there isn't a semi-religious significance to the Raven King. Uskglass's way of doing business - humbling the rich and powerful, exalting madmen and slaves - is a vision of the ideal political arrangement, but also has plenty of moral parallels. More importantly, there's a definite sense that his command extends beyond human affairs; his magic permeates the very hills.


The brown fields were partly flooded; they were strung with chains of chill, grey pools. The pattern of the pools had meaning. The pools had been written on to the fields by the rain. The pools were a magic worked by the rain, just as the tumbling of the black birds against the grey was a spell that the sky was working and the motion of grey-brown grasses was a spell that the wind made. Everything had meaning.

Much of fantasy uses this sort of spiritual paradigm to describe the world of magic, the idea that our devices and desires are merely the mask of a transcendent metaphysical battleground. Just peel away the scales from our eyes and we'll see that the spiritual and sacred have never really been separate. Even our actions, in the end, fall into some plan we cannot see. Jonathan Strange and Mr. Norrell, so proud of their abilities, are nothing but "the spell John Uskglass is doing," declares Vinculus, beggar and wild-eyed prophet extraordinaire. Uskglass's very name (originally d'Uskglass - suggesting a dusky glass), suggests that we now we only see through a glass darkly. We are haughty and think our actions shall change the entire story. We fancy ourselves the author, when most of the time, we're just a subplot that ends prematurely (or possibly we may be comic relief). The Father Brown stories (which aren't fantasy, but definitely take place in a fairy-land), put it rather well:


'[W]e here are on the wrong side of the tapestry,' answered Father Brown. 'The things that happen here do not seem to mean anything; they mean something somewhere else. Somewhere else retribution will come on the real offender. Here it often seems to fall on the wrong person.'

It's a trend in most fantasy stories. The sheer abundance of prophecies which foretell a coming "chosen one" illustrate this concept that there is something beyond the confines of the world, pulling all the strings. The chosen one often has little to do with establishing his or her own fate.  In The Hobbit:


"Then the prophecies of the old songs have turned out to be true, after a fashion!" said Bilbo.

"Of course!" said Gandalf. "And why should not they prove true? Surely you don't disbelieve the prophecies, because you had a hand in bringing them about yourself? You don't really suppose, do you, that all your adventures and escapes were managed by mere luck, just for your sole benefit? You are a very fine person, Mr. Baggins, and I am very fond of you; but you are only quite a little fellow in a wide world after all!"

"Thank goodness!" said Bilbo laughing, and handed him the tobacco-jar.

The Lord of the Rings:


“[T]here was something else at work, beyond any design of the Ring-maker. I can put it no plainer than by saying that Bilbo was meant to find the Ring, and not by its maker. In which case you also were meant to have it. And that may be an encouraging thought.” In the Harry Potter books, the transcendent power is love:


"That which Voldemort does not value, he takes no trouble to comprehend. Of house-elves and children's tales, of love, loyalty, and innocence, Voldemort knows and understands nothing. Nothing. That they all have a power beyond his own, a power beyond the reach of any magic, is a truth he has never grasped."

The Chronicles of Narnia talks about "the deep magic," and in Star Wars the Force is (at least in the original trilogy), an unknown power which undergirds all life. In all of these things is a belief in some sort of fate, which, incidentally, is a trope usually reversed in science fiction. Scifi looks to the future and the importance of human ingenuity. Doctor Who, for instance, goes so far as to take these beliefs and use them to fashion a god in humanity's image (as I argued in a rather curmudgeonly piece a few years ago).

Fantasy, on the other hand, emphasizes the weakness, the insignificance, of man. The Hobbit would be pointless if Bilbo Baggins were a brilliant warrior (cough, cough, Peter Jackson) - it is powerful because he is an ordinary person lost in a wild world. As Chesterton says, "The old fairy tale makes the hero a normal human boy; it is his adventures that are startling; they startle him because he is normal....You can make a story out of a hero among dragons; but not out of a dragon among dragons. The fairy tale discusses what a sane man will do in a mad world." 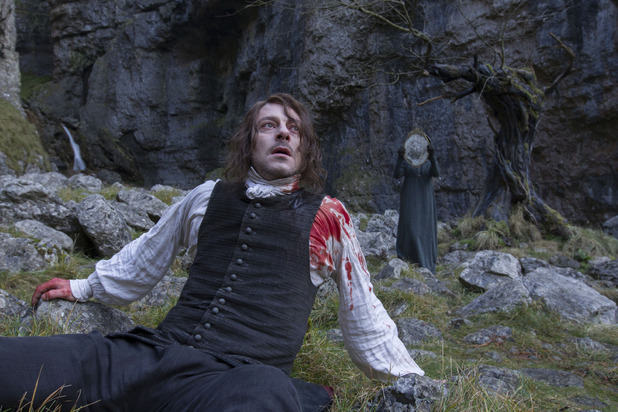 In Jonathan Strange & Mr. Norrell, nearly every character is proved helpless before the awesome power of real magic. After discovering the world behind the mirrors, characters realize that “Magic, which had seemed so familiar just hours before, so English had suddenly become inhuman, unearthly, otherlandish.” When Norrell's servant, Childermass, experiences it, he is overwhelmed:


In his weakened state, Childermass had been thinking aloud. He had meant to say that if what he had seen was true, then everything that Strange and Norrell had ever done was child’s-play, and magic was a much stranger and more terrifying thing than any of them had thought of. Strange and Norrell had been merely throwing paper darts about a parlour, while real magic soared and swooped and twisted on great wings in a limitless sky far, far above them.

Facing this threat, both Norrell and Strange are fatally flawed, Norrell because he will not engage the mystery, Strange because he thinks he can control it. Fear and arrogance. But even the fairy Gentleman, who personifies magic for much of the story, is not its final word. He is a more exaggerated form of selfish English society, but the deep magic of John Uskglass's world is utterly democratic, building its foundation on valiant peasants and humble servants (notably, it is Childermass, Lady Pole, and Stephen Black who are the triumphant authorities in this world.)

It is a world that is utterly beyond our control, which comes crashing into normal life with disturbing frequency; it is an assurance that even the inanimate is meaningful, that the voiceless are heard on the other side of the curtain; it's Father Brown's invisible angler and Luke Skywalker putting away his targeting computer and Indiana Jones closing his eyes and trusting to the mystery. It is the deep magic, spoken by the Raven King. And he speaks still, if only we would listen...in every story of deep magic, which reminds us that the woods around us are just as enchanted as they ever were...