Extremis is a weird, weird piece of television. It’s a more restrained Moffat, but it’s still straight out of his peculiar imagination. It combines his love of puzzle mysteries, meta fiction, self control horror, and lack of consequences, and the result is something I'm still mulling over.

First of all: consequences. From his very first episode he wrote, Steven Moffat has avoided the permanence of death. “Everybody lives, Rose! Just this once, everybody lives!” It’s a great line, but one that only works because of the rarity of the situation. The first time, it worked as a sudden eucatastrophe, but these days, Moffat is snatching a character from the jaws of death every other episode, usually thanks to cheap technological Deus ex machinas. He’s fake-killed River, the Doctor, Amy and Rory, and Clara—all of his main characters so far. Watching Moffat episodes is like watching a simulation, because every character respawns after death...much like Super Mario. It's frustrating and makes it hard to care.

Looking at it that way, Extremis could be a meta commentary on Moffat himself.

The episode begins with an execution, a long time ago in a galaxy far, far away. The Doctor has landed on a planet where he’s been asked to execute Missy, his age-old enemy. The Doctor, being the Doctor, rescues her, on the condition that he guards her in a vault for a thousand years. The consequences of not doing this are presumably dire, but what those consequences are, or why they're in place, or who will administrate them is anyone's guess.

Meanwhile, the current Doctor is approached by officials from the Vatican. They want him to read an ancient text known as the Veritas. Of course, there’s a hitch. Moffat recycles his old self control horror gimmick. Don't blink. Don't forget. Don't open your eyes. In this case, it's a little more complicated, and could be summarized as don't read, don't kill yourself, or simply...don't lose hope. Everyone who's ever read the Veritas immediately committed suicide.

What could cause someone to lose hope so quickly and irrevocably? The Matrix, it turns out. Proof positive that we're living in a computer simulation.

That's where my problems with the episode begin. First of all, Moffat is repeating the same "suicide as escape/salvation" idea which he employed in The Angels Take Manhattan (and metaphorically, by erasing CyberDanny's emotions in Death in Heaven). In this episode, the imagery is even more intense, with a man shooting himself and a group of scientists blowing themselves up in response to this knowledge. My first question is, why is this the only logical response? Plenty of people would take the "let's eat, drink, and be merry, for we are in a computer simulation" approach. Is it really necessary for all of the "smart" ones to conclude suicide is the only option? That's a bit grim. Plus, I'm pretty blasé about Matrix-style reveals these days. I know too many teenaged atheist bros who like to throw that situation out there as if it were a completely valid, grownup concept. "Yeah, you believe in God, but what if this is all a video game?"

And how in the world could the Doctor email himself a file using a fake pair of sonic sunglasses? They would have no way of connecting with the internet in the real world if the projection is self-contained. How would he know his own real-world email address? Wouldn't the email just send to the projection-glasses? The simulation set-up doesn't hold up to lasting scrutiny.

As for the rest of the story? It tackles so many things that I never had the time to get fully emotionally invested, but it improved on the rewatch. The Doctor's blindness is still here, though it was the simulated Doctor's blindness all along, so I'm just not sure how I'm supposed to feel about that. In any case, it's being handled well. Capaldi doesn't milk it, and it adds an edge to the Doctor's final confrontation as he has to keep feeling his way around the Resolute Desk to deliver his final speech.

I can only imagine how incomprehensible all this would be to a newbie. Its complexity and mythology overwhelms the cleanness of the show’s soft reboot. Bill is barely important in this episode, overshadowed by Nardole and Missy. It's worth noting that Nardole is terrific and Missy is an absolute hoot here. It's a shame Michelle Gomez is departing the show with Capaldi.

I'm really not all that sure why the Catholic church was dragged into all this, except to add a bit of color to an already fully stuffed episode. The Pope barging in on Bill's date was pretty funny, especially since he was in the middle, apparently, of having a "bigger on the inside" moment. And the presence of religion in a story focused on truth, courage, and virtue is probably appropriate, though the central belief in this story is, mainly, in the idea of the Doctor as...the Doctor. 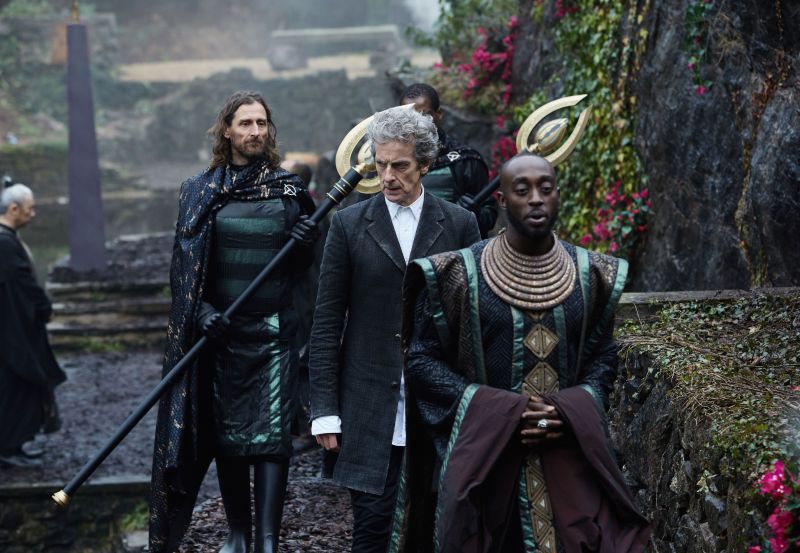 That is one thing Extremis gets right. "The Doctor" is a concept Moffat likes to twist and turn into everything from a militaristic antihero to a traumatized little boy. But "the Doctor" as an idiot time traveler who just relentlessly does the right thing, "without honor, without witness, without reward," is an idea true to the very heart of the series. It's a nice touch that it's the Doctor's late wife who reminds him who he is and what he stands for (Isn't that marriage? "When I forget my name...remind me").

And ultimately, who he is holds true, even to the point of death - or, uh, deletion. Maybe I do understand the inclusion of Catholicism - at the point of death, a priest arrives to remind you of what matters, and to offer confession: the chance to tell the truth (flashback to Heaven Sent). Virtue is always virtue, but virtue in extremis is more likely to be real - to be true. In an episode where reality is constantly in question, the fact that the Doctor falls back, ultimately, on an axiomatic belief in virtue is a surprisingly insightful and simple conclusion from a Moffaty episode. It's good advice for teenaged atheist bros too.

My review of the next episode: The Pyramid at the End of the World.

Well, this episode cleared a lot of the air. We know it's Missy in the vault now, which was the obvious answer. The Monks are the seasons' new villains, but who they are and what they want is unclear. The River Song reference was merely that...a reference. After that shocker of a cliffhanger last week, the end of this episode feels a bit anticlimactic.

It took an entire episode for the Doctor to send an email. And that was only real for Shadow Doctor. Shadow Doctor regained his eyesight briefly, though it cost him an arm and a leg (or a regeneration or two), but real Doctor remains blind, with only Missy(!) to help him face the Monks. Hopefully, we'll get back to real life - metaphorically speaking - next week.


My sister finished this piece of #DoctorWho fan art just in time for tonight's episode. pic.twitter.com/hramzsIExq
— Longish ن (@HannahGraceLong) May 21, 2017