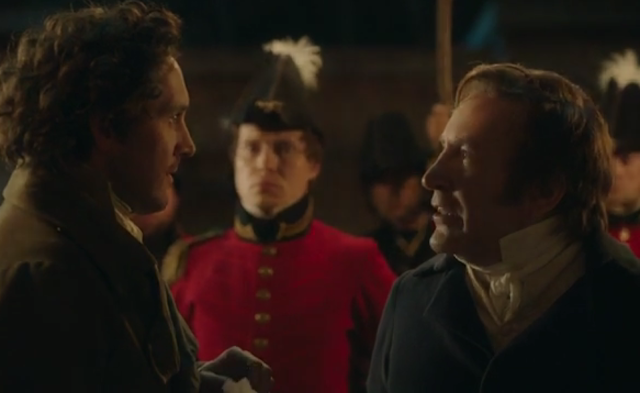 My review of last week's episode: How Is Lady Pole?

This show remains ridiculously entertaining. It's the most beautiful fantasy world I've seen in ages, bar Miyazaki. The effects are staggering, and the story intelligently told. True: this episode shows a few more missteps than the previous two, but the final scene still leaves me hungry for more. 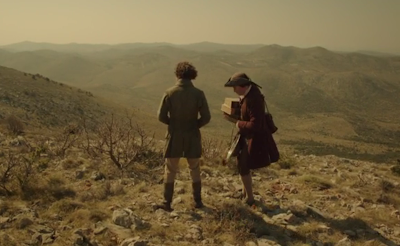 Last week, the Gentleman had become fascinated by Arabella Strange, which now means stalking her while she visits the increasingly erratic Lady Pole. Arabella intuits that something here is very wrong, but neither Lady Pole nor Stephen Black can tell her the truth.

It isn't for lack of trying. Lady Pole makes a tapestry of Lost-Hope and attempts to show Arabella what is going on. Even this attempt is sabotaged by Mr. Norrell, who's definitely starting to show his nasty side. With the aid of Childermass, he destroys Lady Pole's tapestry and intercepts Arabella and Jonathan's correspondence.

Speaking of which, Strange has arrived on the continent, only to find himself suddenly persona non grata. The Duke of Wellington (Ronan Vibert) is resolutely nonplussed by Strange's resume, and even less impressed by the idea of magic (a practical man, the Duke.) Vibert (who I've seen play everyone from Robespierre to Motty in Jeeves and Wooster), is tremendously fun in the role, though he's nothing like what I imagined. He isn't as brusque or heartily military as my mental image, but he does convey a terrific no-nonsense pragmatism and refuses to let wonder-boy Strange bully him.

Instead, Jonathan finds that he must prove himself, and starts the process by earning the trust of the men. (Unfortunately, we don't see the marvelous little scene where a clergyman guides Strange in how to do this - I find it unlikely that he would have come up with the idea on his own.) Next, armed with practical information, Strange offers to do something really constructive for Wellington: build a road. 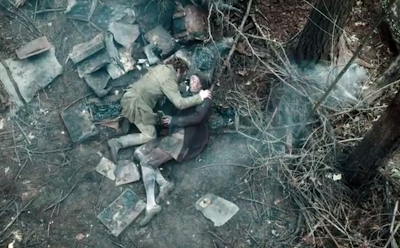 Bertie Carvel has correctly observed (in a conversation which gives me complete faith in the intelligence of JS&MN's creative team) that the particular charm of the series's magic is that it is "lo-fi." It's far more Lord of the Rings than Harry Potter (a very good thing, in my book.) In this episode, without too many sparks and extravagance, Strange builds a road, creates a white mist, speaks to trees, and then - the one misstep - reanimates Neapolitan zombies. He's driven to the last by his first real exposure to gritty war, which results in the loss of Jeremy Johns. The sequence is suitably eerie, but the effect is hardly subtle. I found Lost-Hope's particular brand of freaky more in keeping with the tone.

Still, with the loss of Norrell's books coinciding with his foray into dangerous sorcery, we're seeing that Strange has left behind the safety of scholarly "modern" magic. Wellington may be pleased, but it's wrought a definite change in Jonathan. As some who's read the book, it seems to me this shift is coming too early. Strange's motivation for his actions has changed - in the book, he did the dark magic because he was foolish and arrogant. Here, Johns' death makes him more sympathetic, because it has taught him a measure of humility. Strange does change: he learns what real life is like. War, hardship, the need for ingenuity to survive, and the fact that people will do anything for a potato. He comes back with a new name for a new life: "Merlin." It's his Empire of the Sun experience. 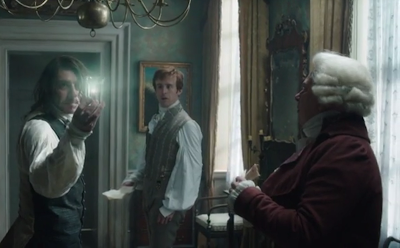 Meanwhile, things in London are heating up. Stephen Black - attempting to salvage a bad situation - tries to warn Arabella away, but to no avail. Even so, she rebuffs the Gentleman's advances, refusing to talk to him without the "presence of my husband."

Lady Pole continues her attempts to escape the enchantment - even by suicide. At last, her hopes are dashed when Norrell informs her she must live seventy more years. Enraged, she tries to assassinate him, and another servant takes a bullet for his master.

Stephen Black, on the other hand, probably won't be taking a bullet for his master any time soon. He has finally learned - if not the fact (surely he must have known), then at least the magnitude - of his mother's tragedy. And the Gentleman, who is explicitly called "the devil" in this episode, shows this horrifying backstory to Stephen, doing everything he can to corrupt the butler. It's a fascinating story element - it is archaic because of its mythological resonance - a righteous commoner being tempted to evil - it is modern because the commoner is African. Knitting together these two sensibilities is Susanna Clarke at her best. 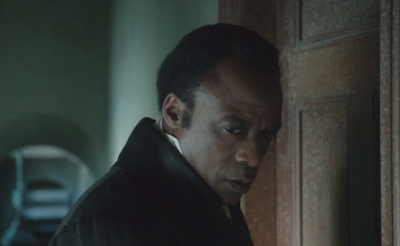 If that sounds grim, that's because it is. The story has taken a turn towards the dark, with one death, three zombies, a possibly fatal gunshot wound, Lady Pole's insanity, and the tendency for all the powers that be to look the other way while the world goes to hell. Is there any hope of stopping the Gentleman before it's too late?

One last thing: originally Hollywood had the rights to this novel. They were (really) trying to produce a movie directed by....

So without further ado, Jonathan Strange and the Five Armies.

In this episode, awkward gentleman Strange goes on an adventure with a bunch of lovable redcoats. The snobbish general Wellington wants a road, but Strange instead builds a huge freeway made out of glowing steel and coated with gold for no reason whatsoever. He then resurrects an entire army of Italians, and has to join Wellington in slaughtering all of them for the next forty-five minutes, just in time to assassinate Napoleon with magic.

This leaves about five minutes for all that boring character development in England. Four minutes is spent with the burgeoning romance between Childermass and a completely invented character. The other bit is taken up by the fairy Gentleman, who is created entirely by CGI, and Honeyfoot and Segundus who have formed a two-part musical act.

My review of next week's episode: All the Mirrors of the World