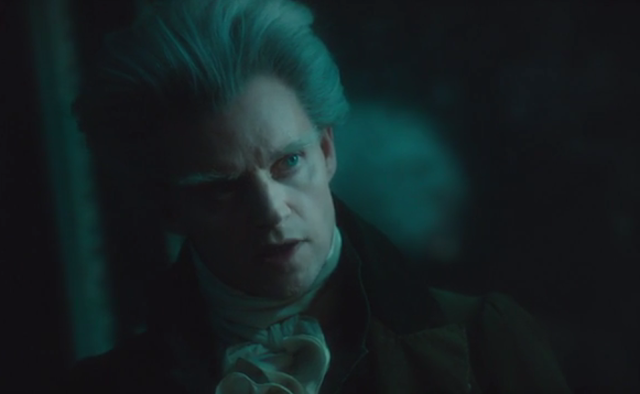 My review of last week's episode: The Friends of English Magic

One of the best things about magic in the world of Jonathan Strange and Mr. Norrell is that it doesn't fix things as if...well, as if by magic. It is a tool like any other, and usually less helpful than most. The mechanics are kept vague for most of the story (as I recall from the book: when there are any specifics, they're wrapped in a semi-scholarly debate about something which sounds a little like HTML code.) Magic doesn't exist in a vacuum. It neither creates nor destroys matter, but merely rearranges it, in the process staying true to Newton's third law: creating an equal and opposite reaction. 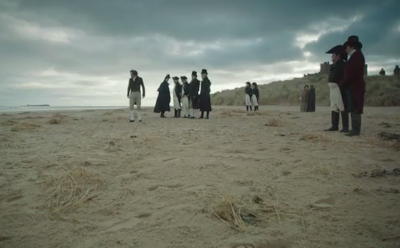 Mr. Norrell is learning this the hard way in the case of the newly resurrected Lady Pole. It seems that half a life is not better than a life. The fairy Gentleman has decided to exact his toll by spiriting Lady Pole away each night to dance in his ghostly kingdom of Lost-Hope. He's also extending his influence to the rest of Sir Walter Pole's establishment.

The Gentleman admires Sir Walter's butler's services so much that he takes him to Lost-Hope as well. Poor Stephen Black (who's not quite as young or handsome as I had hoped) - ever-mannerable - protests at the Gentleman's "kindness," and, Jeeves-like, bemoans the disorder of the enchanted household.

Jonathan Strange, meanwhile, is persuaded by Messrs. Segundus and Honeyfoot to ally himself to Mr. Norrell. While both are rather standoffish at first, Norrell is surprised to find himself delighted at Strange's innovative magic. The two hit it off and get along like a house on fire. 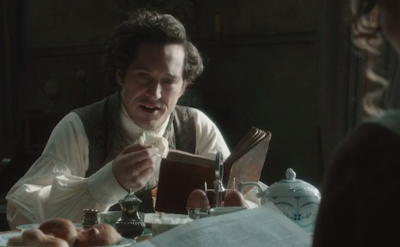 Strange's wife Arabella isn't quite sure what to make of this. Things are hunky-dory at first, but quickly the differences in the two men's temperament - Norrell conservative and hidebound, Strange experimental and arrogant - evince themselves in their methods. Norrell wordlessly creates an invisible barrier around England; Strange theatrically assembles magical horses out of sand to dramatically rescue a ship wrecked on the transparent veil.

On a smaller level, Norrell and Strange begin to irk one another. While Norrell welcomes Strange's friendship, he can barely bring himself to let the younger man access his precious books. On the other hand, Strange quickly becomes frustrated with Norrell's timidity, and wishes to delve into the dark secrets of the Raven King.

Arabella notes these differences with trepidation, and her worry is only exacerbated by meeting loopy Lady Pole, who is unable to tell her anything but that Mr. Norrell has ruined her life. Arabella tries to convey this to Strange, but he pooh-poohs her fears and heads off to fight Napoleon for Harry, England, and St. George.

As for that, the incident with the ship means the government is suddenly keen to have a magician on the battlefield - an idea which Mr. Norrell finds very unrespectable. It seems like Norrell may prevent Strange's going, but Lascelles and Drawlight acquire his permission by cleverly pitting his greed against his fear. 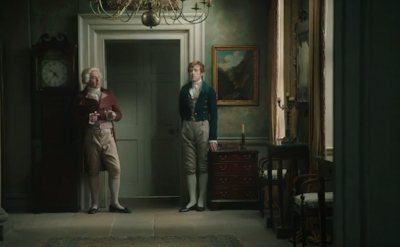 Much of the humor in this episode stems from the adventures of Norrell's chalk-and-cheese henchmen, but Bertie Carvel's Strange is proving himself quite amusing as well. The amount of lightheartedness is surprising (and very well-handled - it could easily come from the amusing domesticity of an Austen story), and given the freakishness of the Lost-Hope storyline, it's interesting how well it transitions between the two. Speaking of Lost-Hope, this section of the episode is simply stunning. The effects, the lighting, the clingy dancers, Marc Warren (who dominates this episode) - all of it is splendidly creepy and full of decrepit grandeur. If I was a bit worried last week, the CGI magic in this story has completely won me over, from the simple scrying spells to the rainships to the marvelous scene with the horses of sand.

The final scene illustrates one of the things this series has done best: combining plot elements to simultaneously abridge the story and ratchet intensity in otherwise mundane scenes. It seems like a simple humorous sequence, as Arabella attempts to outbid the amusingly panicked Mr. Norrell. But the whole atmosphere of the scene changes when the Gentleman appears, glowering, over Arabella's shoulder. What does it mean? Can others see him? Why is he interested in Arabella? A marvelous cliffhanger.

My review of next week's episode: The Education of a Magician