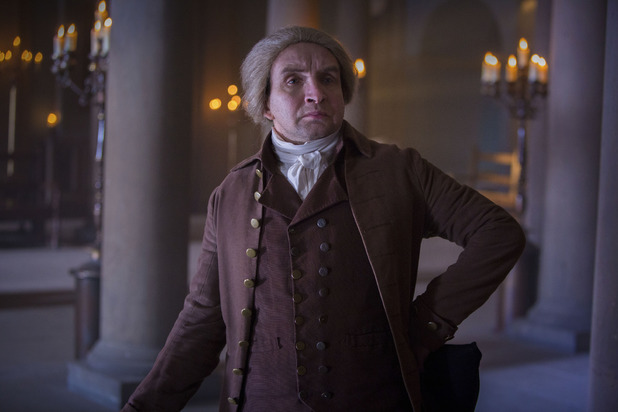 It's 1806, and magic has been dead in England for hundreds of years. So says the estimable Learned Society of York Magicians, but this declaration is turned on its head by the arrival of a powerful, fearsome practical magician, Mr. Norrell (Eddie Marsan). He offers them a deal: if he can make good on his claims to do real magic, then they must relinquish any right to study magic themselves. The ultimatum is a massive piece of foreshadowing. Norrell's success does not allow for sharing. He's not interested in democracy (of course not, he isn't one of those blasted French Republicans, is he?) Admittedly, the competition is not very stiff. There are plenty of charlatans, and the few that aren't are limited to a spell or two. It is unclear whether Vinculus (Paul Kaye) is the former or the latter. When Norrell flees his first claustrophobic experience of London society he runs straight into the arms of ragged Vinculus, who delivers an incoherent prophecy about another magician in England. Who could it be? Wisely, the adaptation introduces this second magician earlier than the book, and it's no surprise that he's the other titular character: Jonathan Strange (Bertie Carvel).

Strange is performing his first simple feat of magic while Norrell is summoning up a fairy gentleman (the ever eerie Marc Warren, who has appeared in Poirot, Band of Brothers, and The Hogfather) to resurrect a prominent politician's fiancée (y'know, like you do). The act will cement his reputation as England's go-to magician, but like most enchantments, there's always a catch...

Let's start by saying the cast is terrific. Eddie Marsan, who has always looked a bit like a smug turtle, is smugger than ever here. I would really say his performance is my favorite (and acting is good all-round). He's a million miles away from his other notable roles - Norrell lacks the bluster of Pancks in Little Dorrit or the blue-collar heartiness of Lestrade in Sherlock Holmes (not to mention the wild ramblings of the mad prophet in The New World). I think his (mostly) understated performance will form a solid anchor to the series.

Meanwhile, Enzo Cilenti makes for a smoldering Childermass. Norrell's reticent servant is the real mover and shaker in the campaign to bring magic back to England. Cilenti turns up the Aragorn, sulking around in corners, propping up his booted feet on a table while smoking a long pipe. He makes for a suitably mysterious and sinister henchman.

He's about the sexiest member of the cast, who, to put it in period drama terms, are far more in the Pride and Prejudice 95 line than the Pride and Prejudice and Keira Knightley line. But that's a good thing. This is a miniseries geared towards fans of the book: those patient enough to slog through pages and pages of scholarly tedium in order to enjoy its dry wit and complex alternate history. In other words, the type to look for P&P 95. My type. Mr. Norrell's type. 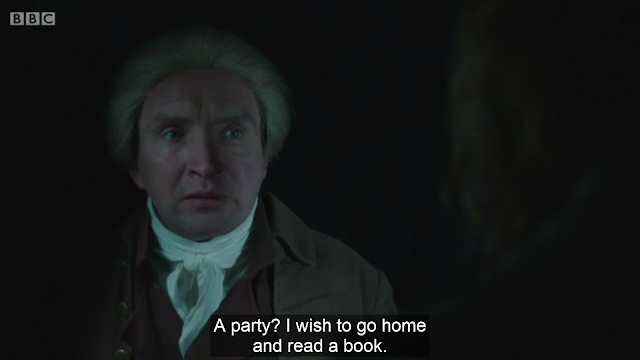 If anyone was going to be the handsome one, it would have been young Jonathan Strange, but Carvel's Strange is a horsey, lanky aristocrat, stumbling around in the plot of a missing Austen novel. He romances the sensible (and certainly handsome) clergyman's daughter, Arabella Woodhope (Charlotte Riley), promising to mend his flaws  and become an upstanding member of society . The whole Gothic magic thing is fun, but Strange's romcom life is a good counterbalance to the fairly grim Norrell storyline.

I'm not entirely sold on the CGI. It looks great for a small-screen production, but the simple stuff still seems to pack more punch. Marc Warren's Gentleman is disturbing, but I wonder if the effects they use to make his voice more menacing will become distracting as the series goes on (the guy really does sound creepy enough as it is).

One last thing: the Yorkshire accents are great. I mean, I'm an ignorant American so I wouldn't know if they weren't great, but I love hearing from the different bits of the U.K., and committing to a series like this means I'll be able to internalize the sound and add it to my ever-growing list of British accents to use when I'm on the run from the FBI (for instance, Broadchurch did this for Dorset, Life on Mars for Manchester.)

My review of next week's episode: How Is Lady Pole?