“Who Could That Be at This Hour?” – a Review 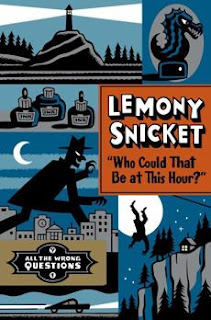 First of all, Happy Birthday, Daniel Handler, a.k.a. Lemony Snicket.


As a lover of sarcasm, black humor, and dry wit, Lemony Snicket’s books have always appealed to me. I loved A Series of Unfortunate Events, featuring the Baudelaire orphans and the wicked Count Olaf. Snicket's latest novel,“Who Could That Be at This Hour?” is in the same vein, and I wouldn’t give it any points on dramatic originality when compared to former work. Still, it’s plenty of fun.


Like ASOUE, in this, the first installment in the All the Wrong Questions series, we have a young protagonist who has to make his way in the world with little help from adults. The time period and location is ambiguous, sometimes feeling like the 1930s, sometimes like the modern day. There’s the same intriguing secret society that hovers around the edges of the tale, but never comes into full view. Lemony Snicket, who is the narrator and main character, loves books, hates coffee, and has had a very unusual education. He also has a female friend who never appears (for ASOUE fans, I suspect this might be the elusive Beatrice.)

There are the same unhelpful mentors, and oddly savvy young children. I wonder if the real author, behind the Snicket pseudonym, makes a tongue-in-cheek reference to this in one conversation:

“I’m reminded of a book that my father used to read to me,” she said. “A bunch of elves and things get into a war over a piece of jewelry that everybody wants but no one can wear.”


“I never liked that kind of book,” I replied. “There’s always a wizard who is very powerful but not very helpful.”

Which is ironic, because that’s just the sort of tale Snicket is in.

Snicket is thirteen years old as the story opens, contrasting with the adult who narrated ASOUE. With the aid…assistance…company of his chaperone, S. Theodora Markson, Snicket travels to the run-down town Stain’d-by-the-Sea, which is not, in fact, by the sea. From the get-go, it’s a place that symbolizes disappointment, and if the name weren’t enough, the local inn is called The Lost Arms, and the barman Prosper Lost. 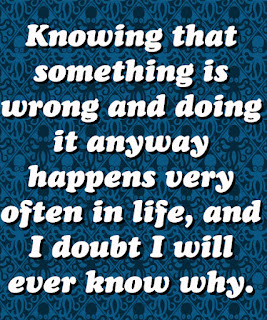 On the trail of a missing statuette, Snicket meets a number of vivid characters, including a journalist wannabe with a fold-up typewriter, a librarian who wears black leather jackets, and a pair of underage taxi drivers named Pip and Squeak. The plot is engaging, with plenty of twists and turns. Like most Snicket novels, it’s absolutely impossible to summarize, but let’s just say that, as usual, the means are more important than the end. The prose is marvelous and subtle, humorous and well-crafted.


Snicket as a character obviously gets fleshed out more fully than as the distant and ever-in-danger narrator of the ASOUE books. He’s kind, courteous, intelligent, and makes promises with great seriousness. He’s a sucker for a damsel in distress, and has a quiet determination to do the right thing. Unlike Violet Baudelaire, who (if I remember correctly) was primarily concerned with the safety of her family, Snicket is alone to the point that he can afford to help others. He doesn’t have any marked character flaws, aside from the tendency to always ask the wrong question and run up the wrong tree, but somehow avoids seeming like a Mary Sue.


The overall message about adults seems to me more positive than the ASOUE novels. The lack of parents is lamented in both, but in “Who Could That Be at This Hour?”, Snicket represents a strong, mature young man that does not accept that all adults are fools, and wants very much to make the world a better place. In his own way, he fills the gap. There is an assurance that somewhere there is a place where parents are as good as the children (except maybe Stew Mitchum, the bad nut among the kids). In the meantime, Snicket is a modern day knight—half-detective, half-bookworm—battling to fulfill his promises in a broken world.


But that’s too epic a note to end on. And while this is a very good book, it’s not epic (a distinction Peter Jackson failed to make with his last movie). This is a small story, but good things come in small packages. It’s deeper than your usual YA novel, with scattered literary references that will challenge younger readers just a bit beyond their limits, and the clever premise and prose will keep adults hooked till the end.

P.S. Also, might I say, the ASOUE movie was very underrated. I thought it was great.
Posted by Hannah Long at 11:13 AM