The Maze Runner - a Review 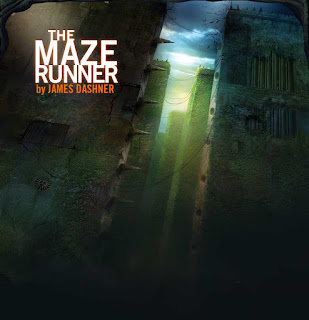 Life can sometimes feel like a maze, but in The Maze Runner, it really is. A maze filled with ginormous monsters. And secrets. And nutty survivor dudes.

Here’s the long pitch from the hardcover edition:
When Thomas wakes up in the lift, the only thing he can remember is his first name. His memory is blank. But he’s not alone. When the lift’s doors open, Thomas finds himself surrounded by kids who welcome him to the Glade—a large, open expanse surrounded by stone walls.
Just like Thomas, the Gladers don’t know why or how they got to the Glade. All they know is that every morning the stone doors to the maze that surrounds them have opened. Every night they’ve closed tight. And every thirty days a new boy has been delivered in the lift.
Thomas was expected. But the next day, a girl is sent up—the first girl to ever arrive in the Glade. And more surprising yet is the message she delivers.
Thomas might be more important than he could ever guess. If only he could unlock the dark secrets buried within his mind.

I’ve read several of James Dashner’s books before, and enjoyed them very much, but The Maze Runner is significantly different in tone. For one thing, it’s obviously marketed to an older audience. The feel of it is similar to The Hunger Games and Divergent, and I’d class it in a similar genre.

Overall, it has everything that makes a book a bestseller. A quick pace, curious storyline, interesting set-up, but ultimately, it falls short. The inhabitants of the Glade are interesting en masse, but not individually. What I mean is, as guys who’ve been living in what’s practically a concentration camp, they seem pretty real. Though Dashner avoids gratuitous cursing, he invents swear words of his own (notably shuck, klunk, and shank – he seems to have a think for Ks) which give it a gritty edge. The watchword is survival. Dashner admits to drawing from Lord of the Flies, and the influence is obvious.


But while this setting is rife with interesting questions and moral dilemmas, none of them are touched upon. For a while, I thought Dashner might have a line about Darwinism and survival of the fittest, but while the case could be made that he was making a subtle point for protection of the weak, it was too subtle. I really did appreciate his positive message about Order, respect, and adhering to laws. Usually, teen books are all about rebellion, but the Gladers have realized that their only chance is to establish rules which must be followed.

As for characters, the protagonist, Thomas is a frustrated, constantly-questioning young man with the occasional dash of bravery. He’s a much more likely leader than Katniss ever was. Still, he spends most of the time being confused and wanting to beat his head against the wall. Admittedly, the dude has amnesia, but it feels like he could’ve been given more depth. I was hoping for a definite shift into leader position later in the book, but I suspect that’s being left for the sequel.


The side characters spend most of their time being depressed, angry, or snarky, and while this works usually, it gets rather wearing by the end, and the three or four older Gladers that Thomas interacts with all seem pretty similar personality-wise.


So, overall, a fun plot, but I would’ve settled for the story ending after one book. I cared about the characters just enough to finish it, but unless a more interesting theme is introduced, I won’t be looking for the sequel.