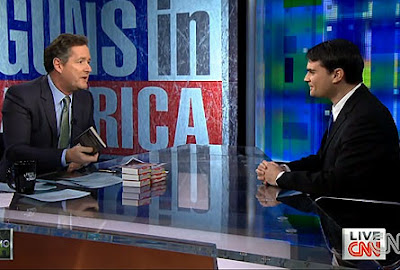 In the wake of the Sandy Hook tragedy, there’s been a lot of talk about guns. Or rather, there’s been a lot of shouting about guns. Both sides seem unable to see how anyone could believe differently, and in general, both act from good motives. On the one side, you have the Right, who are prepared to fight tooth and nail against increased gun control. On the other, the Left is pushing for a ban onassault rifles.

I recently listened to a particularly heated discussion—I should say knock-down, drag-out fight—on the subject between ultra-liberal Piers Morgan and ultra-conservative Ben Shapiro. First, kudos to Morgan for having the guts to have Shapiro on there, because Shapiro obviously came with an ax to grind (or a rifle to prime). Shapiro got off to a quick start by accusing Morgan of “standing on the graves of the Sandy Hook victims” to advance his political agenda. He proceeded to not pull any punches.

Ultimately, the shouting match narrowed itself down to one point of contention that I think summarizes the problem.

Shapiro: “The basis for the Second Amendment is not really about self-defense and it’s not about hunting; it is about resistance to government tyranny. That’s what the Founders said, and that’s what the Right believes in this country.”


Morgan: “Which tyranny are you fearing, yourself?”


S: “I fear the possibility of a tyranny rising in this country in the next fifty to a hundred years. Let me tell you something, Piers. The fact that my grandparents and great-grandparents in Europe didn’t fear that is why they are now ashes.”


M: …“You believe that your own government is going to turn on you in a way that you require an AR15 to challenge them—”


M: “So, the reason we cannot remove AR15 assault weapons is because [of] the threat of your own government turning on you in a tyrannical way.”

I find this an example of a very deep-set difference between conservatives and liberals. Since (not to stereotype, but here it is), the Left is generally more inclined to atheism, it is also more inclined to Darwinism. Darwinism is, by very definition, an enemy to democracy. If some of us are more highly evolved, we more intelligent ones have every right to rule the ignorant masses. (Note: “we” is always used; “them” turns up seldom in Darwinist’s speech, since everybody likes to think we're the "fittest"). This means that the aristocrats of Britain and the Aryans of Germany could easily claim evolutionary superiority; the weak are drains on the community, so they must be annihilated. 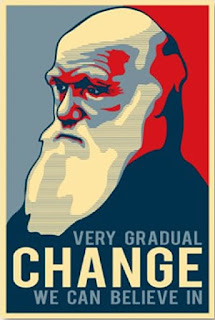 I don’t mean to say that Piers Morgan, or most modern liberals, actively believe this. Or maybe I do. After all, it’s the logical end of the evolutionary argument. If they’d be intellectually honest with themselves, they’d realize this. Some, like good ol' Nietzsche (who actually said what he meant), do. Still, liberalism tends to lean this way, into arrogant intellectual snobbery. The enemy isn’t only wrong—they’re stupid. (Unless they’re one of the favored weak minorities).  This underpinning to the idea of evolution causes modern man to look down on his ancestors as unenlightened, old-fashioned, and rustic.


Conservatives tend to ally themselves with Christian ideals. Christianity teaches that all men are equal before God, and that men now are no more infallible or intelligent than men a thousand years ago. We believe in original sin, and thus in equality. Thus, we tend to distrust other human beings, even the very intelligent ones, because we know that sin lurks in every heart. We also believe that it is the task of the strong to protect the weak, and that through weakness comes wisdom (see one Jesus of Nazareth.)

Bill Whittle has pointed out this trend before (relevant portion starts at 39:00). He told me:  “The idea of lost greatness…you know, I don’t know if you’ve ever really thought about this, it took me a while to get the hang of it, I got it from Lord of the Rings. Modern liberals think they’re smarter than their parents, and they don’t want to disappoint their children. Modern conservatives think we’re not as smart as our ancestors, and we don’t want to disappoint our grandfathers.”

To circle back around to the issue of gun control, Ben Shapiro is right. The Second Amendment is there to protect the people from tyranny, something that was very much on the Founders’ minds at the time. Did you know, for instance, that the government has the power to arrest you without a charge and hold you without trial indefinitely? That's not a theory; it's in the law. Check it out.

In the end, it gets down to one question: Why should the government be more trustworthy than the populace? Look at the average politician and tell me again - you think people in Washington are immune to corruption?