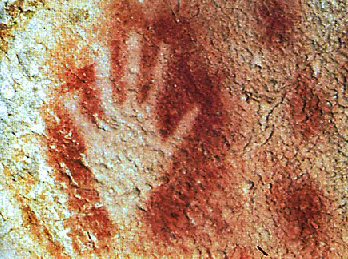 Halfway through noting it down, I froze. The full implications of her words settled into place in my brain. My hand shot up, and I said: "So, just let me just be clear...we know almost nothing about early humans, except...that they were storytellers and artists?"

"Yes," she replied, a bit puzzled by the question.

I was delighted, and looked around the room with a silly grin on my face, hoping someone else would connect the dots. Surely, someone? But no. The teacher continued, not seeming to understand the significance of what she'd just confirmed. For me, the moment accomplished two things - not only did it validate my own artistic endeavors (something I always need) by establishing art as the oldest, most enduring activity in human history, but it immediately brought to mind G.K. Chesterton's observation in The Everlasting Man:


[T]he more we really look at man as an animal the less he will look like one. Today all our novels and newspapers will be found swarming with numberless allusions to a popular character called a Cave-Man. He seems to be quite familiar to us, not only as a public character but as a private character....But the curious thing is...people have been interested in everything about the cave-man except what he did in the cave....

What was found in the cave was not the club, the horrible gory club notched with the number of women it had knocked on the head....This secret chamber of rock, when illuminated after its long night of unnumbered ages, revealed on its walls large and sprawling outlines diversified with coloured earths....They were drawings or paintings of animals; and they were drawn or painted not only by a man but by an artist....Something of division and disproportion has appeared; and it is unique. Art is the signature of man.

The earliest thing we know about humans is that they were doing something unknown in any other form of life in the whole universe: Art.

Human beings are extraordinary. We're so different from other forms of life that we might as well be aliens. Sure, we have the same physical characteristics as, say, chimpanzees, but give those chimps a typewriter and it would take them a hell of a lot longer to turn out Hamlet than it did Bill Shakespeare. Even if they did, they couldn't understand it. Dogs do not muse on the beauty of a rainbow, and horses do not discuss metaphysics over the trough on a Monday morning (cats do, but that's another topic).

One of the oddest things about babysitting a baby human is how quick they are to learn. Teach a dog a trick, and he'll have forgotten it the next day. Teach a baby a word, and he'll be repeating it the next week. At five years old, kids can handle Henry V. Is it because we live in a childless, professional society that we have forgotten this? Don't underestimate the children. And here I am, using a jumble of electricity, metal, glass, and wires to type a message which can be read on the other side of the Earth. We've sent humans to the moon in a magic flying flame-ship. We've produced Mozart and U2 and the Notre Dame cathedral. Humans are artists and storytellers. When we see a man's life, we see a story, a painting, a song. We see meaning in a random configuration of atoms. We see love.

If there's anything self-evident about human beings, it's that we're not at all like animals. To claim so would be absurd. We are superior. That’s not hyperbole or arrogance, but mere incontrovertible fact.

This is not to pretend that animals have no value, but rather, to acknowledge that our superiority should mean something. It means we have an obligation to be good stewards of our mission. Killing Cecil the lion would have been justified if we had been equals - if we were bound by the laws of nature: "red in tooth and claw." But we are not, for Man, "Who roll’d the psalm to wintry skies/ Who built him fanes of fruitless prayer/ Who trusted God was love indeed / And love Creation’s final law—" Man is a storyteller still.

The reductive materialism of college biology is not without cost. When Man is equal to a beast, this doesn't elevate animals to our level, but drags us down to theirs. We worship beasts and imitate their cruelty. Conversely, the adoption of animals as substitutes for children is hardly uncommon. Pets are pampered, adored, treated, and cossetted to the nth degree.

"The unhealthy love of animals is serious," writes Chesterton. Start with the devaluation of humanity, and it's a short trip to the heart of many of society's problems. Instead of acknowledging that mere possession of human genes is worthy of value, we instead attempt to define value by other methods. You're worthy of life if: you're physically healthy, mentally healthy, young, and wanted. If you're not those things, we will literally kill you.

This need not be a religious argument. The imago Dei - a concept not empirically demonstrable - merely emphasizes what we can already see in nature. Even in a small town biology class, where we spent a whole school year outlining how predictable, understandable, and un-miraculous the human body is, this fact was inescapable. Art is the signature of man. And with every new Planned Parenthood video, with every fetus dumped, squirming, into a bowl to gasp its last dying breaths alone, we reap the reward of a hundred sleepy college biology classes spent unweaving the rainbow.