Oh, come on. This is a no-brainer. I mean, it's typecasting, since he played Dickens' other big baddie, Mr. Tulkinghorn, but, hey, if it ain't broke. And, of course, this means we know he is very good at Dickens villains.

Charles Dance is simply the scariest man on earth. He's got a splendid air of menace and grandeur. And since Darnay's grand bad uncle is there to be grandly bad and nothing more, he's perfect. On the other hand, this part can be quite fun when someone turns it campy (see Christopher Lee), and Dance has a wonderful dry sense of humor, on display in the excellent Terry Pratchett movie, Going Postal.

But who could play him in flashbacks? 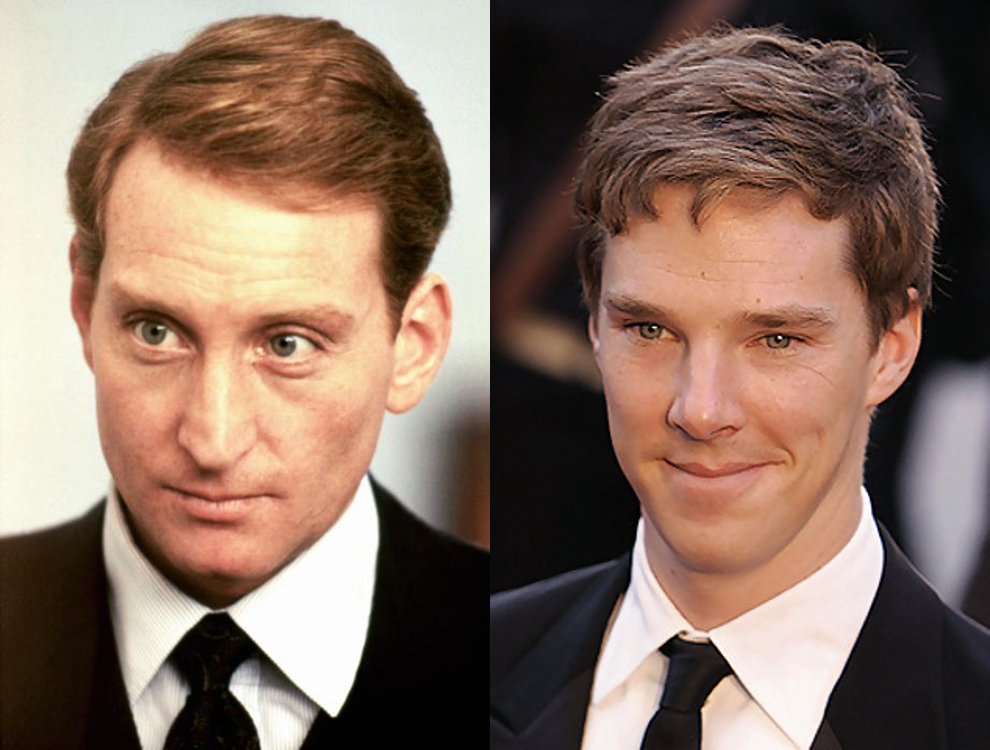 Next up is the inimitable Jerry Cruncher. I started by scrolling through the great Dickensian stalwarts - Alun Armstrong, Timothy Spall, Simon Callow - but I admit that my dad's suggestion, Sean Gilder, has a certain pockmarked charm. He was splendid as Styles in Horatio Hornblower. After Jerry Cruncher comes his boss, the fussy, no-nonsense, heart-of-gold banker Jarvis Lorry. Bill Paterson is a hardened period drama veteran - in this photograph playing Mr. Meagles in Little Dorrit. The real question is whether he can handle both the fussiness of the character and yet give him a bit of depth (I think he can), for that scene near the end. You know, with the fire and the log and Sydney's boot...you don't? You're not as obsessed with this story as I am? You've got problems. 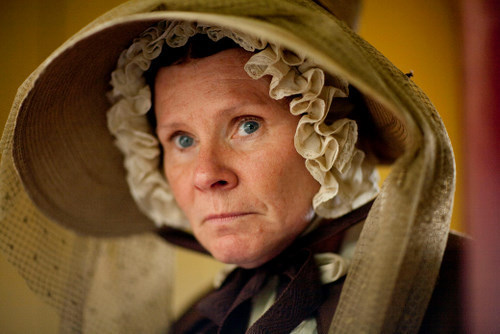 Next up? Barsad, the villainous villain who is also (spoiler) Solomon Pross. Here's another typecast with Iain Glen, the sleazy bad guy from Wives and Daughters and Downton Abbey. 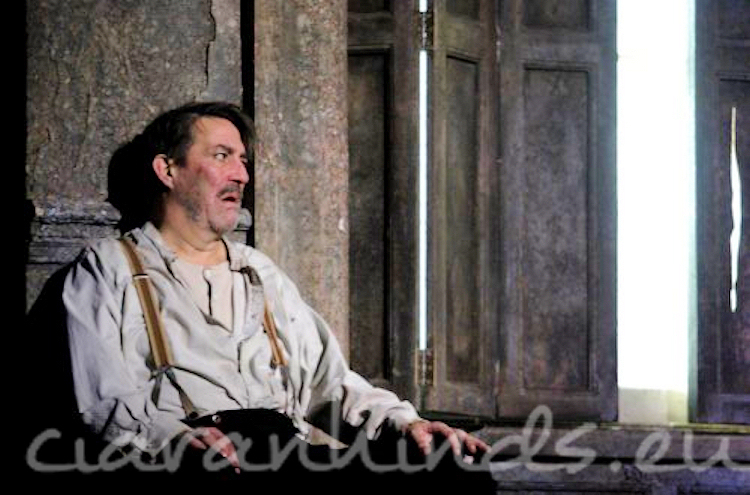 Monsieur Ernest Defarge is really just there to play second fiddle to his deadly wife, but he's got to maintain a significant physical presence. He's the muscle. Therefore, enlist Irish actor Ciaran Hinds, who is large, intimidating, terrific with accents, and a great actor to boot. He's also got great chemistry with... And finally, the big bad herself, Madame Defarge. This casting is mostly inspired by a lovely moment in the Poirot episode Peril at End House, when she suddenly breaks bad and yells "You're all soooo stupid." She is malice personified. And therefore Polly Walker is perfect for the crazy psychopath Madame Defarge.

We're nearing the homestretch, and here's a final no-brainer - Philip Glenister as Stryver. He's got the bombast in spades, and impeccable comic timing. He can play an oblivious idiot like no one else. Here he is in Cranford.

Hailee Steinfeld made a terrific leader performance in the Coen Brothers' True Grit, so I know she has the acting chops to handle a brief but pivotal role. (I'd also be happy with Q'orianka Kilcher.)

We've finally reached the Manettes. The good doctor comes from a suggestion from Gina Dalfonzo and Rachel McMillan. John Hurt has just the right qualities of dignity and quietness to play Dr. Manette. Also, importantly, I think he could do crazy.

And since, given the flashbacks, we'll also need a younger Manette, how 's about...

Lee Ingleby is incredibly versatile - I'm most familiar with him as the over-confident jerk D.S. Bacchus in the Inspector George Gently series, but he's also terrific and nearly unrecognizable as the under-confident pushover Midshipman Hollom in Master and Commander: The Far Side of the World. Lucie Manette will be played by Felicity Jones. She's had plenty of period drama experience from The Invisible Woman to Northanger Abbey. Recently she was in The Theory of Everything, playing Steven Hawking's wife, Jane. 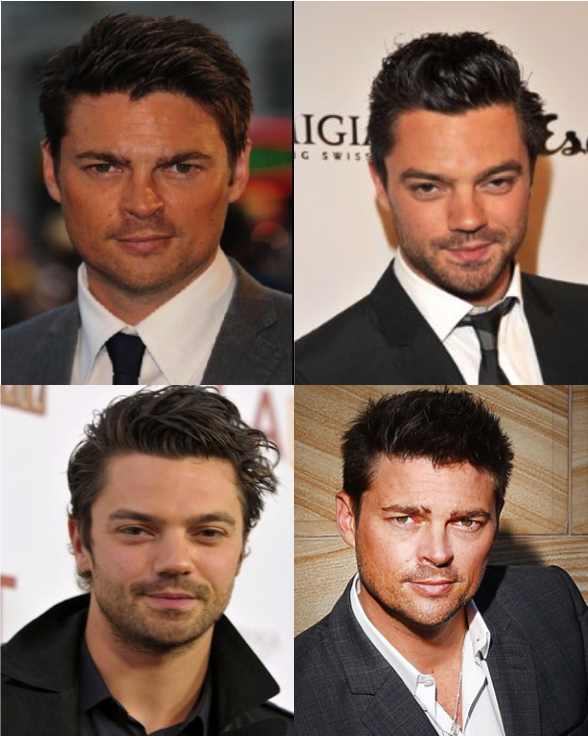 And...Darnay will be Karl Urban. No period drama experience, as far as I can tell, but he's great with accents, and if he's got the dignity to play Eomer, he can handle Darnay.

Next up is the man himself, Sydney Carton. Dominic Cooper specializes in bad boys, but he's also got a sense of humor. You might have caught him in Captain America or Agent Carter as very American Howard Stark, but he is, in fact, British, as one can see in the below screenshot from Sense and Sensibility.

And that's it. A Tale of Two Cities. Not the dream cast, the only cast. 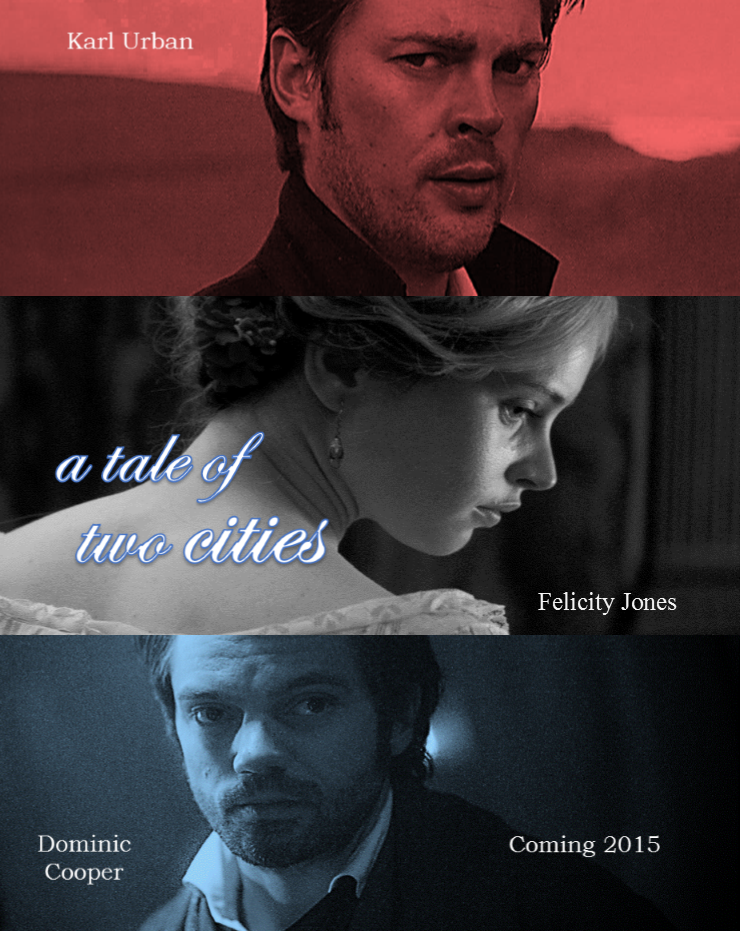