The latest installment of Endeavour is some pretty terrific television, reminding me of the slick perfection of Sherlock. It neither blurs the moral lines, nor grants the villain super powers, accomplishing both these things without sacrificing suspense.


An unknown menace stalks Oxford, appearing at first to be just another deranged lunatic, killing at random. But Detective Constable Endeavour Morse uncovers an underlying method to the madness; the elaborate staging of the crimes suggests that the killer shares Endeavour's passion for opera.


While Oxford city police scramble to find the next potential victim, it seems that Endeavour has finally met his intellectual match. As the body count increases, letters containing cryptic clues, goading the police for their failures, are sent to the Oxford mail. Only a detective of Endeavour's intellect can break them.
Plot-wise, I can think of few loopholes. The suspense was at times truly scary. But it never descends to horror—I could enjoy being scared without being terrified. It was fun suspense. The sense of danger was heightened by the fact I already deeply care about the characters (good job, boys.) The plot is complex, but despite the abundance of twists, it's easy to follow, and the cleverness of the killer almost forces one to admire the guy.


I could pick on a few things. The first scene felt a bit stilted. At one point a character is injured and the physical consequences seem far too mild. I guessed the villain’s identity—all right, my mom guessed it first, but I think I’d have gotten it soon after, being a murder mystery veteran. Yet it isn’t abundantly obvious, and there are red herrings. Abigail Thaw's cameo as Dorothea Frazil was fun, but felt slightly superfluous.


Shaun Evans is great as usual, though I wish I could’ve seen a little more paranoia. But this is me remembering Morse’s unraveling in Masonic Mysteries, where the omnipotence of the killer was more pronounced, and there was a heavy element of conspiracy.

I’m glad they’ve started to allow Morse to make mistakes. One of the best parts of the original series was Morse charging off in the wrong direction—the writers never gave in to the temptation that Morse must always be right because he’s the protagonist. He was very fallible, and in many ways, wore his brokenness on his sleeve. Evans’s Morse isn’t this flawed, but again, this is Morse as a young man, less set in his ways and a bit more likeable. Fine acting from the new kid, though. 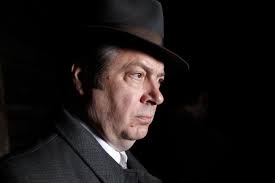 There are, however, a few scenes where he has to fade in the presence of Roger Allam. My liking of Inspector Thursday has increased with each episode. His home life and military past, explored in greater depth, is a real foundation to his quiet, understated goodness. Morse’s inexperience with an ordinary family environment is particularly on display here.


Not much from P.C. Strange, who, as comic relief, would throw the dark feel, but D.S. Jakes takes a more prominent part. Chief Superintendent Bright walks the line between amusing and annoying with his British what-what-old-boy act. Jakes and Bright have been somewhat one-note portrayals so far, but I hope in future stories they may be fleshed out further. As for other acting, the only other person I’d mention in particular is the killer, who I won’t name for fear of spoilers.


The music in this episode was particularly good. I have sometimes felt that Endeavour (much like Lewis) injected opera or classical-sounding-music just to grant a modicum of culture to otherwise commonplace situations, but this time the music perfectly fit the larger proportions of light and dark.


It will be hard to surpass the level of writing, acting, and execution displayed in this episode. Though Masonic Mysteries was a great example of the type, I’d have to say Fugue—particularly in the last scenes—outstrips it by a good mile.