Death is not there to be avoided, it’s there to be beaten—it has been beaten. Jesus took death down. Like a line-backer. This is the truest realism, not the despairing acceptance of meaninglessness. If it’s cowardice to avoid death, is it not cowardice to surrender to it? Is it not stupid to eschew all good things because of a hyped up idea that it’s sentimental? Isn’t that just intellectual dishonesty? Sure, it’s wrong to accept an idea because it makes you feel good, but isn’t it also wrong to reject an idea because it makes you feel good?


Hamlet is what happens when people accept pessimism as a world view, as masterfully portrayed by Shakespeare. In the end, this despair, this hovering between a blank existence and “the undiscovered country, from whose bourn no man returns” culminates in tragedy.

Christians, on the other hand, have to regard death in a whole new way. We have to stare death in the eye, like Clint Eastwood in a western showdown, regardless of the fact we are unarmed. Surrender is impossible; death takes no captives. What about running? You cannot hide. Death will find you. There’s only one way—to grit your teeth and face it.


It’s not easy. Of course not. What good thing is?

But it makes a great story.

So who gets the first prize for confronting death?

Tolkien’s fantasists are certainly high on the list. Even J.K. Rowling incorporated such themes into her work (the name of the villain in the HP series, Voldemort, comes from the French: vol de mort, "flight from death." Rowling admits in this article she drew from Christian themes for the series.)

Mythopoeia:
They have seen Death and ultimate defeat,
and yet they would not in despair retreat,
but oft to victory have tuned the lyre
and kindled hearts with legendary fire,
illuminating Now and dark Hath-been
with light of suns as yet by no man seen.
….
I bow not yet before the Iron Crown,
nor cast my own small golden sceptre down.


Interesting. The escapists are more realistic than the realists. Two particularly good books, though critically maligned, have yet achieved great popular success. They each deal (in a very healthy way) with death: A Tale of Two Cities and The Lord of the Rings. Very few mediums achieve that level of Death-As-Triumph-ism. Partly this is a lack of epic scale, or a dislike for melodrama. Fairytales are, in general, the best. Fantasy is often characterized as being very optimistic. This is untrue, as an essential element to fairytales is great darkness. Middle-Earth, for instance, is populated with orcs, barrow-wights, homicidal willow trees, pirates, fiery demons created by an ancient Satanic force, undead ring wraiths, and a fallen spiritual being, the Dark Lord. Such enemies are common in fantasy. Do they, then, breed fear?


G.K. Chesterton: “Fairy tales, then, are not responsible for producing in children fear, or any of the shapes of fear; fairy tales do not give the child the idea of the evil or the ugly; that is in the child already, because it is in the world already. Fairy tales do not give the child his first idea of bogey. What fairy tales give the child is his first clear idea of the possible defeat of bogey. The baby has known the dragon intimately ever since he had an imagination. What the fairy tale provides for him is a St. George to kill the dragon. Exactly what the fairy tale does is this: it accustoms him for a series of clear pictures to the idea that these limitless terrors had a limit, that these shapeless enemies have enemies in the knights of God, that there is something in the universe more mystical than darkness, and stronger than strong fear.”


Besides fairytales, any story with a courageous death. I know real life isn’t that cut and dry, and who knows what my last moments will be like, but watching others (not necessarily Christians) triumph over both fear and despair, and literally “go gentle into that good night”, will at least present me with a role model. 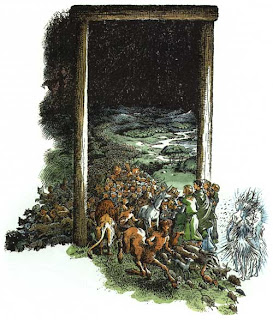 I have an unusually philosophical view of death. Partly it’s because I find it easy to emotionally distance myself from things (sometimes). But I have seen death from an early age. We live in the country—we often come home to find our dog’s disemboweled victims scattered in the front yard. My dad read The Last Battle and The Lord of the Rings to me a young age, and through them I faced the reality of evil and a solid solution. I don’t fear hell, but what’s more, I don’t fear heaven. This isn’t much to my credit, I just happen to have been given the resources and environment to grow a healthy respect and disregard for death. This foundation informs my entire worldview.


Recently, a friend was diagnosed with cancer. My mom was shocked—“I can’t believe it,” she told me. “He’s such a godly man.”


I said, “You’re right. I can’t think of anyone readier to die.”


“That’s true,” she replied. “But somehow, you just think that good people will never have to face that.”


C.S. Lewis: “[T]here is no question of death or life for any of us, only a question of this death or that—of a machine gun bullet now or a cancer forty years later….100 percent of us die, and the percentage cannot be increased.”


Why should the godly be spared? After all, we all must die to step into salvation, though first time around it’s a metaphorical death.


Matthew Perryman Jones: “When you fall apart the pieces fit, you won’t see in till you’re blinded. You can let it go, or hold it tight, when you lose your life you will find it.”


I often think our society would be mightily improved by people facing up to the 100 percent death rate and deciding it might be better to let go rather than having surgery after surgery and living a never-ending half-life. I know that many people do welcome death bravely, electing oblivion over suffering, but the number—especially in the west—seems to be shrinking.
﻿

Have you planned your death? Got your exit scene choreographed? It could happen today. It will happen. Have you memorized your last lines? You’ve had your whole life to plan them. Curtain is any minute, and there’s a cloud of witnesses holding their collective breath. Will it be worth singing about? (Sometimes I think that’s the only question worth asking.) As a survey of the pettiness, malignancy, and true greatness of human nature, reading the wiki page of famous last words is revealing. There’s everything from obscenities cackled by serial killers (mostly to the tune of “I’ll be in hell before breakfast”) to obviously pre-prepared conclusions with the flair of a Pauline epistle to witty one-liners.


John Quincy Adams: “This is the last of Earth! I am content!”


Benedict Arnold: “Let me die in the old uniform in which I fought my battles for freedom, May God forgive me for putting on another.”


Humphrey Bogart: “I should never have switched from Scotch to Martinis.”


Alexander the Great: “To the strongest!”


N.D. Wilson (who is not dead): “Christ to the thief: Come with me. We die together, a thief and the Maker of the world. Walk with the Infinite made flesh into the belly of the whale. Stand close while reality quakes. Watch while Death is taken by the throat. Today you will be with me in Paradise.


Elijah was a guy that knew how to go out with a bang. We don’t all get the chariots of fire option, but most of us regard them as either to be avoided or a blessed escape from bleak reality—both incorrect. They should be seen as an adventure, an entrance into a whole new world, “Chapter One of the Great Story which no one on earth has read: which goes on for ever: in which every chapter is better than the one before.”

Death, be not proud, though some have called thee
Mighty and dreadful, for thou are not so;
For those whom thou think'st thou dost overthrow


Die not, poor Death, nor yet canst thou kill me.


From rest and sleep, which but thy pictures be,
Much pleasure—then, from thee much more must flow:
And soonest our best men with thee do go,
Rest of their bones and soul’s delivery.
Thou’rt slave to fate, chance, kings, and desperate men,
And dost with poison, war, and sickness dwell;
And poppy or charms can make us sleep as well,
And better than thy stroke. Why swell’st thou then?
One short sleep past, we wake eternally,
And death shall be no more. Death, thou shalt die.