Okay, so yeah, I'm going to be talking about everything that happened. And what happened last season. If you want a spoiler free review...go elsewhere, and good luck. However, I will attempt to keep the third season spoilers above the break. If you’ve come here looking for a review pointing out some hitherto unnoticed aspect in a well-crafted, tightly edited essay, you’re looking in the wrong place—this is just my impression, over-long and rather self-indulgent. But fun to write.

So let's face it, we've been waiting two years to find out how Sherlock fell. Was it worth it?

The short answer is: yes.

The long answer? Well, it was always going to be a little anticlimactic to those who had spent any time immersed among the wildly varying internet fan theories. It turns out, my guess was pretty much completely correct…they didn't throw us a last-minute curve-ball, they didn't unveil a brilliant, unexpected solution, they aren’t smarter than us (we do, after all, outnumber them by a few million). The great thing is, though, that they are quite aware of that, and so decide to mess with our minds in other ways. 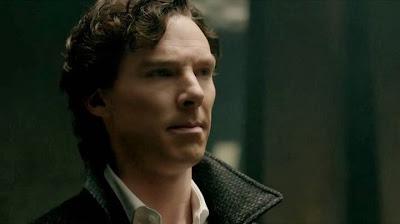 The opening sequence is simply brilliant. We begin with a ludicrous, Bond-esque faux solution featuring a bungee cord, rubber mask, famous English hypnotist Derren Brown and Benedict Cumberbatch decidedly hamming it up. It deftly caught us all by surprise, theorists were disappointed and then pleasantly shocked into laughter. This nicely slipped around my cynicism, and along with another, even funnier solution featuring Andrew Scott, more than made up for the simplicity of the final explanation. (Yet even so, the writers wisely throw some doubt into the mix as Anderson questions Sherlock’s official account. Will we ever really know? Perhaps we shouldn’t.)

One of the things I really enjoyed about The Reichenbach Fall (a superb psychological thriller) was that I finally found myself capable of liking Sherlock. Before that, John was obviously the more mature, adult member of the duo, with Sherlock as the awkward, immature man-child so popular in modern telly. But in the season two finale, Sherlock reached for something better, something noble and sacrificial. He realized the value of other people, and in so doing found a form of redemption. Of course, then he didn't really die, and the whole thing was an act. So what next?

I held out some hopes that Sherlock really did face some risk in his seventy-foot fall, to lend retrospective weight to his roof-top soliloquy, but the unveiling shows that not only was he completely safe on the roof, but that he had been hoodwinking Moriarty from the very beginning. (That said, I think I can still watch Reichenbach innocently, since it is primarily from John’s perspective—he was still the audience stand-in and we only care about what he knows.)

By contrast, this new episode is firmly from Sherlock’s point of view, with the plot circling around his much-anticipated return to London. In many ways, this episode is more a tribute to Sherlock fans than Conan Doyle, with the establishment of fan club The Empty Hearse (a corny pun on the original tale: The Empty House) unexpectedly led by a scruffy Anderson (Jonathan Aris), Sherlock’s former punching bag. I can’t help but speculate that this move may have been prompted by Aris’s longing to escape the position of fandom’s most-hated character.

We don’t get much insight into The Great Hiatus, a little bit of a disappointment—I was hoping we would see Lestrade and Watson teaming up to (inadequately) fight crime in Sherlock’s absence, as in the book (okay, well technically, Watson acts as pathologist occasionally, but a crime-fighting duo is what I’d have made of it in Sherlock.) This makes the sudden leap into action somewhat disconcerting, and left me wishing for a little bit more to establish the new setting. But we’re quickly clued in to the changes—Anderson is now Sherlock’s biggest fan, Mrs. Hudson is lonely, an underused Lestrade is pretty much the same, Mycroft has no goldfish, John has spent most of the two years trying to avoid reminders of his Baker Street days and is only now, with a new relationship, starting to blow the cobwebs away.

Speaking of which, John Watson’s fiancée Mary Morstan (in real life Martin Freeman’s wife, Amanda Abbington) is terrific, a refreshingly strong, confident female character, taking Sherlock’s return in stride. She confounds expectations, refusing to take the easy jealousy route, or be as easily embarrassed as the always-sensible, emotionally fragile John Watson. Even Sherlock is compelled to like her, and, thankfully, also refuses to sink to the petty jabs he made at John’s previous girlfriends. In this matter, Sherlock has finally started to grow up. While still immature and dramatically tone-deaf in matters of the heart, he is learning to bridle his tongue, and not hide behind sarcasm. He begins to exhibit some of original Holmes’s charm and honest concern, being kind to Molly and brotherly to Mycroft.

As for Mycroft himself, he has a significant part to play in the plot, embracing more fully the canonical brilliant-but-lazy older brother, more than a match for Holmes Jr. On the other hand, the amusing cameo of Mr. and Mrs. Holmes—Cumberbatch’s real-life parents Timothy Carlton and Wanda Ventham—revealed their relative ordinariness, a fact which had a somehow perfect inevitability. Of course Sherlock’s parents are ordinary—who could imagine a dynasty of genius Holmes? But it does feel as if we stepped completely out of the Sherlock alternate reality and into the world of Benedict Cumberbatch and the teenage fangirls, a fault which can sometimes plague the episode. Thankfully, however, this scene is a brief tip of the hat, and hopefully we shall in future, as Conan Doyle, wisely leave the past cloaked in mystery.

When the Reunion finally comes, it has appropriately masculine flair. John does not faint, or fall weeping onto Sherlock’s shoulder, instead he tackles him, yelling abuse. Even when we do head towards the sappy, we quickly do an about-turn into humor, which really binds the two much closer than any teary conversation.

And now to the plot. It’s not much to speak of, being choppy and unimaginative (and bound to perform poorly contrasted with the tight, clean script of A Study in Pink and the stately realism and emotional highs of Broadchurch, both of which I watched in the last few days). A rather predictable terrorist plan to blow up Parliament a la Guy Fawkes exists merely to assist the character arcs. It climaxes in a defuse-the-ticking-bomb situation which has no real physical suspense but serves nicely to force Sherlock and John to come to terms with one another. It must be said that Cumberbatch and Freeman are both at their very bests, as Sherlock must journey from cavalier disregard to repentant humility, and John from resentful fury to reluctant forgiveness.

Then, in the last frame, we get a glimpse of Lars Mikkelson's Charles Augustus Magnussen, watching - creepily - videos of Sherlock trying to dig John from the bonfire. I don't think I've ever seen a villain who stares at pictures of the hero obsessively...except Irene. And every stalker-villain ever. So that's a little bit cliched, but I'm optimistic about him.

Overall, a thoroughly welcome return to Sherlock’s London, and if Mark Gatiss’s mystery-of-the-week is somewhat hackneyed, it is more than made up for by witty dialogue, excellent acting, a whole lot of fun, and an intelligent, plausible severance of last season’s emotional Gordian knot.

The game is on.

My review of next week's episode: The Sign of Three.