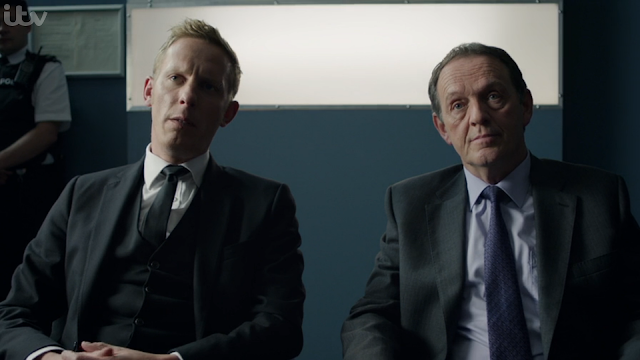 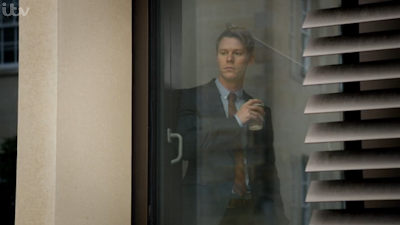 Given the fact that this is the last episode, what could be more appropriate? It's been ten years of Lewis the show and twenty-nine of Lewis the character, which makes Kevin Whately the longest-working cop on British TV (I believe? Next-closest is David Suchet, and he only detected for a quarter-century.) It's hard not to feel the pathos - this the end of a very long road.

As a side note, this is the second detective series finale this year that features a bomb blast, and also the second that ended once and came back for several more seasons before getting to the we really mean it this time ending. Lewis's bomb, it turns out, is made with "fulminated mercury packed into a small pipe," and mercury's hard to get these days. Except in Oxford.

For example, Adam's brother, David (Oliver Lansley, an Endeavour veteran), gambles with Andrew Dimmock (Peter De Jersey, a Broadchurch veteran) who has access to mercury. David worked with his brother on knot theory: the idea that if you can figure out how DNA is packed, you can replicate it, which could open the door to curing genetic diseases. Obviously, this is pretty important stuff, but while Adam wanted to share their findings with Humanity, David wished to sell to the highest bidder. This was a bone of contention between the two brothers.

There's another problem. Supposedly, in order to achieve their big breakthrough, Adam and David stole the research of a colleague, Kate McMurdoch. She's dating a young student, Djimon Adomakoh, who works with mercury. 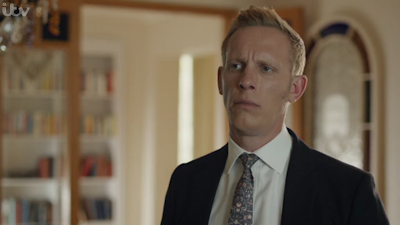 Adam was not a stellar husband. He cheated on his wife, Elizabeth (Zoë Tapper) frequently (as she well knew, and is just a little bit too zen about). One of these dalliances produced an accusation of rape, and while the charges were dropped, the girl, Paula Guitteau, committed suicide. Her parents, Frank and Joyce, are still grieving. Joyce buries herself in charity work, Frank in gardening (and working with fluorescent light bulbs, which contain mercury).

Another of Adam's affairs produced a child. The mother is the caretaker of Elizabeth's father, a mild-tempered, wheelchair-bound philanthropist (named Donald) who was funding the Capstone's research. He's kindly, even-keeled, and far, far too unsuspicious for the illustrious David Warner to be playing him.

The plot itself is a solid one. The red herrings reveal themselves at their usual steady rate, and there are no great surprises. The story is unusually magnanimous towards its suspects. One subplot ends on a sad note, and naturally, the murderer isn't exactly rejoicing with great joy, but the characters left in the aftermath of Adam's personal life are hopeful. It's all very efficiently done, and leaves adequate room for the main cast to focus on their problems.

James seems to find some sort of closure with his family, again through the medium of poetry. It's bit unsatisfying since we never really got to know the Hathaway family well (perhaps Endeavour will help), but James's problems have happily been pushed to the periphery to focus on Robbie.

Lewis is suffering from an identity crisis. Being a detective is his whole existence. It has subsumed everything else: "Like Morse." Gerard Manley Hopkins's poem As Kingfishers Catch Fire (from which Hathaway reads), puts it like this:


Each mortal thing does one thing and the same:
Deals out that being indoors each one dwells;
Selves — goes itself; myself it speaks and spells,
Crying Whát I dó is me: for that I came.


I say móre: the just man justices;
Keeps grace: thát keeps all his goings graces
Acts in God's eye what in God's eye he is
Chríst. 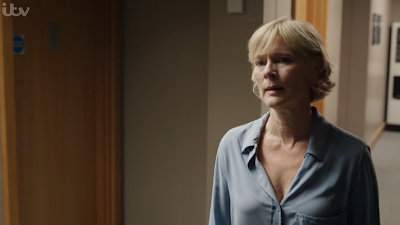 And yes, yes, you say, the metaphors are all very well, but what about Laura? A dramatic event halfway through the episode provides the impetus for Clare Holman to really make herself felt. In five minutes, Laura's confrontation with Lewis has more dramatic punch than any of the abstract, vague conflicts in Hathaway's family, and now that the season has finally gotten around to giving her her due, she more than delivers. In fact, Laura is the beating heart of the episode: sympathetic to Lewis's crisis, but obviously still wishing he would find some purpose beyond his job.

After twenty-nine years, Lewis's self is his work. He "justices." He knows nothing else. Is that a criticism or a tribute? It's definitely a mixed blessing. Laura's presence reminds him there are acts of justice to be done outside his vocation. Perhaps the nobility he seeks should not be found in the definition of his job, but the actions he does within and (more relevantly) without it.

James helps a bit with that: he slices through the Gordian knot of Lewis's personal life in a refreshingly direct fashion. The relationship between the two is in the background, unspoken, but rock-solid. Don't expect any tearful morgue visit complete with kiss to the forehead - Hathaway (he announces imperiously) doesn't even hold hands - but their final scene together is moving, nostalgic, and gently bittersweet in all the right ways. Unlike the end of Morse, which felt dreadfully final, this ends with a smile, a loud T-shirt, and a question mark. Which is all quite perfect.

What of the future? The team, with the exception of bossy Moody, has slipped into a comfortable routine. It's a shame it has to end now, but while I do think this is the end of Lewis, it may not be the end of Lewis. I could see him cameoing as a consultant in, say, another TV show. There are loose threads still to be resolved. Lizzie's personal problems are left hanging. Joe Moody isn't all bad, and he has room to develop. All these things could lead somewhere, but most of all, I think of a certain lanky figure standing adrift in a crowd, and turning to the camera to walk into his own life. That's a glimpse of the future - only time can tell whether it will be our last. I hope it isn't.

Longish
Posted by Hannah Long at 12:42 AM