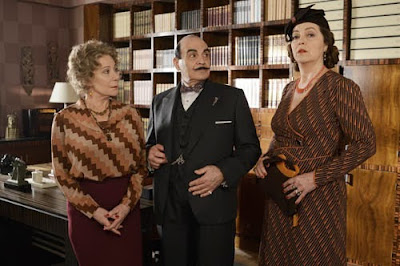 A couple, General and Mrs. Ravenscroft, walk along the white cliffs of Dover, arm-in-arm. The dog runs ahead, barking happily. They smile at one another. A few seconds later, a shot rings out, and the two lie dead.


Thus kicks off the climactic season of Agatha Christie’s Poirot, running circa 1989. Despite an added storyline involving murder by hydrotherapy (a psychiatric treatment in which the patient is blasted with scalding then freezing water), this episode is not as uniformly dark as Murder on the Orient Express, the intense conclusion to the previous season.


Ariadne Oliver’s appearance adds a good element of humor. Her slapdash, jovial demeanor is the perfect foil to Poirot’s fastidious world-weariness (which has become a little old—dude, one smile won’t hurt.) During the reception for her Crime Novelist of the Year award, Mrs. Oliver is cornered by the formidable Mrs. Burton-Cox, a mother with an ax to grind. Does she remember her goddaughter, Celia Ravenscroft? Yes, well, what she wants to know is did General Ravenscroft kill his wife, or did Margaret Ravenscroft kill her husband?


Mrs. Oliver, naturally, can’t let it go. After an unsuccessful attempt to solicit the preoccupied Poirot’s help, she approaches Celia. It turns out that Celia, as well as her perspective mother-in-law, wants to know the truth, recalling the 2003 parricide-in-the-past episode Five Little Pigs. I would assume the writer felt a need to distance himself from that, along with spicing up the dull original novel, so he gives Poirot another case to investigate: a drowning at a mental institution. It adds a darker touch to a story with several old ladies rattling on about the good old days.

This added complication makes the story somewhat unwieldy, but it hangs together pretty well. Mrs. Oliver’s investigation is thoroughly enjoyable, and the aforementioned old ladies are lovely in their rattling on. The spirit of vintage Christie wards off the graphic sex which has sometimes intruded into the Golden Age atmosphere (see, The Hollow), and there are no token gay characters (see, Five Little Pigs).


On the other hand, Poirot’s sleuthing is more the routine of the later series, uncovering office adultery and old sins, which, proverbially, “have long shadows.” The holding of grudges and execution of vengeance are prominent themes, but don't have as satisfactory a resolution as those of Five Little Pigs (which was well-written, but poorly executed.) Thus, ultimately, the ending of the otherwise entertaining Elephants Can Remember rings hollow, for though “mercifully, they can forget”, they cannot, it seems, forgive.

My review of next week's episode: The Labours of Hercules.