Jepp, Who Defied the Stars - a Review 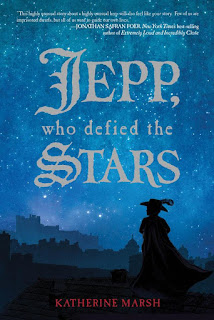 For centuries, human beings have disagreed about our destinies. Is the world only chaos, full of random choices, yet free ones? Is there freedom? Or are we bound to a fate written before our birth, written in a book that cannot be changed? Is God in control – or are we in control – or both?


That’s the question tackled in Katherine Marsh’s novel, Jepp, Who Defied the Stars. As the years have passed, I’ve grown less interested in YA fiction (though I continue to write it), but when I saw the title on a library shelf, it sounded too promising to pass up. Also, I love unlikely heroes, and Jepp seems certainly, ha, short, on the heroic potential.


A teenage dwarf living in 16th Century Europe, Jepp is immediately a distinct and unique voice, mixing old-fashioned, somewhat archaic language with simple, clear thinking. Living in the small town of Astraveld, he is raised to believe the stars decree a man’s fate. In this, he is similar to the author, who was raised in a family that focused strongly on astrology. But Jepp mixes the astrology with Christianity, and frequently uses Biblical allusions, something refreshing in a 21st Century novel.

“There is no luck,” [Don] confided. “There are only the stars, Jepp. That is where our fortune or lack of it resides.


“God made the stars….But it is the celestial bodies that make us.”

Astrology is similar, in a way, to Calvinism, but without attributing our fates to God. Still, the idea that God runs things is frequently connected with astrology in the novel. One day, a stranger offers Jepp the opportunity to leave Astraveld for the deceptively glamorous world of the Spanish Infanta’s court, Coudenberg Palace. Once there, he starts to realize the mistake he’s made. Court dwarfs were notoriously mistreated, and incited by the suffering of his new friend, Lia, Jepp decides to escape.

Not to spoil the plot, I’ll just say he eventually ends up at another court, Uraniborg, the home of a wildly eccentric astrologer named Tycho. Here he starts to question his fate, and whether his stars were true, or whether, as Tycho believes, a man who takes “the way of the mind…can bend the heavenly force.” At Uraniborg, Jepp meets Magdalene, who encourages him to think, but not to question his stars. Magdalene is comforted by the assurances of a clearly delineated fate, but Jepp comes to believe that God gave man a will for a reason. In the third part of the book, he really gets into the heavy questioning about who he is, his true identity, and whether the horoscopes he believed in can control his destiny.

Jepp is elevated above the majority of YA fiction by the author’s keen observations about humanity, and subtle metaphors. The prose and vocabulary are considerably better than average. My major literary quibble is that it felt like some of the chapters could have been cut or trimmed for the pace’s sake. Many of the characters really existed; the historical detail was intricate.

Overall, the book is an interesting excursion in to the idea of free will and destiny, but without strong Biblical input, its conclusions are somewhat wishy-washy. As the title suggests, Jepp decides to defy the stars, and set out on his own to make a life. Many Christians believed in free will, but it has always been clear that we cannot, as Jepp says, create “a heaven of [our] own making.” God is necessary for the truly happy life.

However, as I mentioned earlier, Jepp stays surprisingly true to form as a 16th Century Catholic, believing in God and displaying an informed view of theology and the Bible. Unlike many modern writers, the author doesn’t slip into the pitfall of creating a conveniently ahead-of-his-times protagonist, and Jepp never questions God’s existence, or slips into any of the clichéd atheistic doubts.


As a disclaimer, there is no commentary about the occult properties of astrology; it is never portrayed in a very negative light. Thus, it might not be appropriate for younger, impressionable children, but many of the other themes make it more of an older teen novel anyway, including off-screen rape and substance abuse.
Still, Jepp is a compassionate, merciful, and mature young man, exhibiting a sensitive conscience and gentlemanly behavior, refreshing when compared to the popular rebel teen. His perspective as a dwarf is very unique and makes him an instantly sympathetic character. One of the best scenes features a character extending forgiveness to someone he (and I for that matter) really wanted to die.
"We are all sinners," Jepp declares. One thing he is not short on, and that is mercy.
Longish
Posted by Hannah Long at 10:27 PM